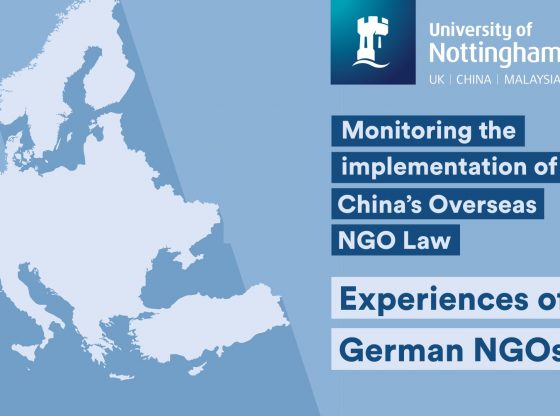 Depending on their profiles and strategies, German NGOs have developed different coping strategies. Two NGOs applied to register a Representative Office; one of them succeeded. Three NGOs are working with permits for temporary activities. 2017 has been a grace period for them; the first real test will be in 2018. In two cases registering for temporary activities has been rather difficult.

Successful registration does not necessarily imply the continuity of meaningful cooperation. There is still a lot of uncertainty: Chinese partners were reluctant to cooperate with German NGOs under the new law; politically acceptable public spaces and issues have been shrinking; and some Chinese partner organisations used the opportunity to take over project ownership. EU-China dialogue forums have become increasingly official, narrow, manipulative and mechanistic. Administrative costs have often risen exponentially. Climate politics is the only field where European and Chinese interests are still aligned.

Whereas in the past Chinese NGOs joined international cooperation platforms in the spirit of mutual respect, during the C-20 in Hangzhou a free exchange of ideas was not possible. At the follow-up event in Hamburg Chinese participants used Leninist tactics to promote authoritarian norms at a global conference on civil society.

To conclude: German NGOs are currently re-evaluating if meaningful cooperation is still feasible and are considering their strategic options. All would like to continue to engage China. But what are their options when the Chinese state wants to reduce the sectoral focus and the number, capacities and performance of International NGOs?