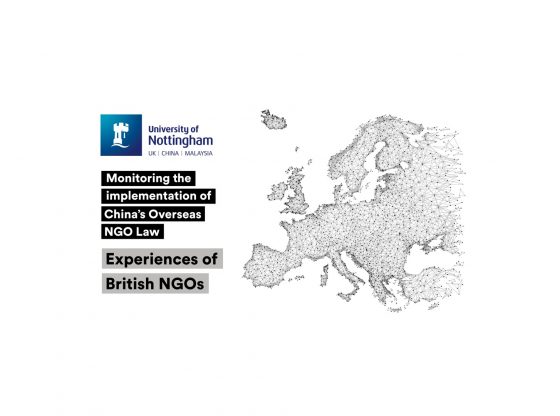 I have been speaking to a range of UK-based not-for-profit organisations to find out how China’s Overseas NGO Law is affecting their work and the work of their local partners.

First, it is too soon to assess the full impact of the law. Several organisations voiced the view that the Chinese authorities still seem to be feeling their way on implementation. In some respects the grey area for overseas NGOs has continued. Several European organisations are operating on the basis that they are not required to register. They either have a special status as quasi-public bodies or they can present themselves as companies.

Nevertheless, everyone I spoke with acknowledged that the law was having an impact. Organisations admitted to being more cautious in their choice of local partners or topics. Chinese organisations were more wary and many could no longer involve foreign partners in their meetings.

The law is reinforcing forms of cooperation with which the Chinese authorities are most comfortable. This includes safer topics such as trade or the environment, and more conservative relationships. Organisations that enjoy good guanxi with officials are better placed to withstand increased scrutiny.

Unregistered civil society organisations in China are the main losers as funds from overseas groups are harder to access. Perhaps my most depressing conversation was with a British medical charity that, because of the law, has discontinued providing micro grants to patients’ groups.

The law, however, may also be having unintended positive consequences. Civil society space in China has not completely closed. Local groups are finding new ways of working that may be more effective as they reach out to new allies at the grassroots and among the elite.

Nicola is Founder and Director of The Rights Practice, and is the former Director of the Great Britain-China Centre. She tweets at @NMacbean