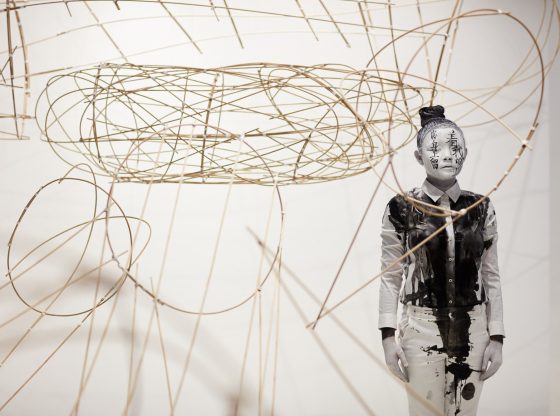 Echo Morgan is the English name of Xie Rong, a Chengdu-born, London-based, multi-disciplinary artist whose work is underpinned by a dark family story. She works with stereotypes of ‘Chineseness’ and femininity in order to subvert them. Morgan has written texts on her skin using red lipstick, black Chinese ink, white ‘ink’ made from jasmine tea, and her own breast milk after giving birth to her second child. She has played with tropes of Chinoiserie, painting her naked body to resemble blue and white porcelain, and then inviting the audience to violently wash the patterns away by hurling water-filled balloons at her. Her work mines her own experiences of childhood, family, marriage and motherhood – and those of her female ancestors. She is a story-teller.

When I saw images from Morgan’s 2017 Hong Kong show, ? Home, I was intrigued. The exhibition featured a re-enactment of her 2011 work, I Am A Brush, in which she ‘wrote’ calligraphy with Chinese ink using her own long hair. The result of the original performance was an 11-metre long scroll covered in abstract marks, later cut into five pieces for the exhibition. It’s a wry comment on the red-hot market for ink painting and the fashion for Chinese traditions, but it’s also the result of a very personal ritual of loss and sadness. I found Morgan through the Hong Kong gallery, and we met in London late last year. Over coffee in the hushed surrounds of the British Library tea room, she told me about her life and work.

Morgan’s performances incorporate gesture, voice, text and image. I Am A Brush began when she was completing a master’s degree at the Royal College of Art in London. She had become interested in theories of female language, prompted in part by the breakdown of her first marriage to a husband who could not comprehend why his wife, then working as a designer for a major department store, would give up a good salary to become an impoverished art student. Morgan remembered how her mother had carefully brushed her long hair before her wedding, reciting a traditional bridal blessing. She wanted to make something using hair and text to express her sorrow. Hair, ink, and tears: in I Am A Brush the traditionally masculine scholarly language of calligraphy becomes a female language of the body.

A woman’s hair is imbued with contradictory meanings – a ‘crowning glory’ that is also abject, a sexual fetish that is also terrifying, a source of power that also signifies vulnerability and subservience. Dipping her hair into dense black Chinese ink, Morgan ‘wrote’ out her heartbreak and her strength, her sadness about the end of her own marriage and those of her divorced mother and aunts. She thought of The Good Women of China: Hidden Voices by Xinran (another Chinese woman who had made her home in England). Morgan told me of a line that resonated with her own experience: ‘Every family has a book but in China the book is glued with women’s tears.’ Her mother’s bitterness, and her own, seeped into the paper with the sweeping arcs of her hair. She said, ‘All the ink marks and dots were words, they were the stories of the women in my family.’

Be Inside the Vase was a multi-layered work performed in London in 2012 and documented by Morgan’s partner and collaborator, photographer Jamie Baker. It includes photographs, a film with a haunting monologue reflecting on her fraught relationship with her father, and the performance itself. The photographs of Morgan’s body, painted with floral motifs, are a challenge to orientalism, a self-reflexive examination of Chinoiserie, and a deliberate positioning of a Chinese body for a western gaze. The naked artist, painted white, has covered herself with a blue and white porcelain pattern of bamboo and cherry blossom. A branch of blossom trails across her face, covering her mouth, silencing her. The beauty of these photographs belies the much darker content of the performance from which they came.

The title references a Chinese saying that likens a beautiful woman to a vase – fragile, smooth, and hollow. Morgan’s abusive and emotionally volatile father was a gangster who operated in the grey areas of the rapidly opening Chinese economy in the 1980s; he ran nightclubs, brothels and casinos, and collected black market porcelain. He demanded that his daughter appear decorative and expensive, like a Song Dynasty vase. Morgan’s mother, in contrast, told her not to be like the surface of a pretty, empty vessel, but instead to be like the inside: ‘Be the quality!’ Divided into ‘chapters’, the first part of Be Inside the Vase deals with the conflict and violence of her childhood. Morgan said, ‘The first story [Million Dollar Baby] began with my father’s attempt to commit suicide. He owed everyone money.’

In the second part, Break the Vase, the artist stood inside an enormous vessel made of paper and bamboo. She invited the audience to throw water-filled balloons at her in order to ‘break the vase’. At first people were hesitant, but soon the paper vase broke apart and the missiles smashed into the artist’s face. Morgan’s nude body was gradually revealed as the paint washed away and the bamboo structure was broken: a simmering undertone of violence became explicit and dangerous, the audience was made complicit. Juxtaposing English narration with Chinese traditional songs, Morgan plays with her complex hybrid identity and her difficult childhood. She explores the territory of translation: between two languages, between gesture and stillness, between her Chinese past and English present, between performance and image.

You Have My Blood in You is a further interrogation of her past – sent away at the age of four after her parents’ divorce to board at a much-hated ‘strict Communist kindergarten’, Morgan was shaped into a ‘xiao hong hua’ (Little Red Flower), obedient and pliant. Later, she yearned to escape the cage of expectation and the weight of memory. When Morgan became a mother to sons, memories of her father threatened to overwhelm her. All his shady schemes came to nothing, and all his supposedly valuable Song Dynasty vases turned out to be worthless fakes – he died destitute. Underneath her white clothes, her body is painted with black ink that gradually seeps through, signifying a stain that cannot be washed away, and the blue pigment represents the blue and white glaze of porcelain.

Since the 1980s contemporary artists in China have deconstructed and reconstructed calligraphy in subversive ways, often – as with Xu Bing, Wu Shanzhuan or Gu Wenda, for example – to comment on meta-narratives of culture such as the power of the state or the sweeping forces of history. In Echo Morgan’s works her own body, her hair, even her breast milk, become a language; she is writing a woman’s story of suffering with a subtext of strength and courage. She says, ‘I do really respect the power and strength of women, but I think in my work you see a lot of fragility. And that is how I feel, as a daughter, as a wife, as a mother.

A version of this article was previously published on The Art Life.

Luise Guest is Manager of Research at the White Rabbit Collection in Sydney, an extensive private collection of contemporary Chinese art, she is an educator, independent art writer, and researcher with a focus on contemporary Chinese art. She is currently completing research degree at UNSW Art & Design in Sydney. Image provided to author with permission of Rong Xie/ Echo Morgan.