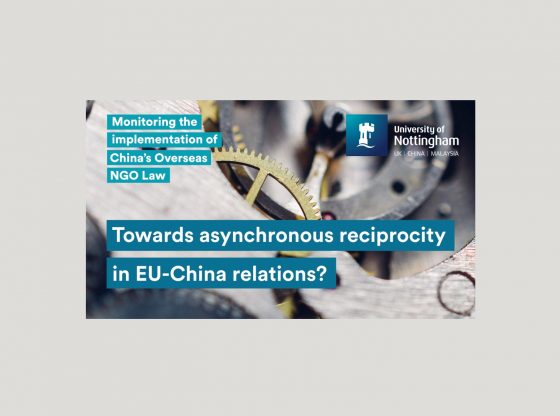 Europe is struggling to respond to an increasingly assertive China on the world stage. China’s newfound confidence is on display both in terms of its military and economic might. While the People’s Liberation Army (PLA) flexes its military muscle in the South China Sea, Chinese state-owned-enterprises almost exclusively benefit from Xi Jinping’s flagship trade and investment policy Belt and Road Initiative (BRI). Against this backdrop, European politicians and diplomats have started reevaluating Europe’s relationship with China. Based on the European China engagement experience since the beginning of Xi’s era in 2012 it is fair to say that the European private sector and European civil societies are not benefiting from the relationship in equal measure. In the commercial realm this is evident from continued restrictions to the Chinese domestic market. China’s cybersecurity law furthermore complicates existing commercial operations. European firms with offices and factories in mainland China can no longer rely on virtual private networks (VPN) in order to circumnavigate China’s internet firewall. European non-governmental organisations (NGOs) are likewise struggling to sustain their operations under the conditions of China’s controversial Overseas NGO Law. Complying with the law has exponentially increased their financial and administrative burden. Increasing numbers of foreign business and NGOs are considering to leave China, or in some cases have already done so.

The French political scientist Francois Godement has long argued for “‘reciprocal engagement’ – [were] benefits of developing the relationship should be shared between the two sides of the aisle”; more recently he suggested that the “European Union must also devise policies fit for an era in which China rejects reciprocity“. In internal strategy meetings frustrated European decision makers are wondering whether or not (and if so, how) Europe can realistically defend and expand the principle of reciprocity in EU-China relations? The answer to this question will determine the future trajectory of EU-China relations, either helping to gradually improve the fraught relationship or sending it into a tailspin.

The US debate on how to counter the Chinese government’s increasing international assertiveness offers some initial hints as to how Europe could respond. Proposed policy solutions in the American discourse have so far largely focused on defensive measures, e.g. reciprocal restrictions such as visa limits for Chinese STEM students and the potential banning of party-state backed organisations operating outside China. The problem with adopting such policy responses is that they would violate Europe’s liberal-democratic norms and values, as codified in the Lisbon Treaty. While the European Union and governments of its member states can legitimately protect European strategic industries, e.g. through investment screening, in the societal realm limiting visas for Chinese citizens or alternatively banning party-state supported organisations such as Confucius Institutes or other party-state affiliated organisations like Chinese Student and Scholars Association (CSSA) would almost certainly backfire.

Responding this way would convey the message that Europe sees China not only as an economic competitor but also as a political enemy, thus falling into the trap of cold war thinking. The Chinese government, in another round of tit-for-tat retaliation, would almost certainly spin such European counter-measures as aimed against ‘the Chinese people’. Europe’s liberal and tolerant reputation in mainland China would suffer as a result. Instead of portraying China as the new bogeyman Europe should try to keep communication channels open for as long as possible.

Looking for clues in the past and the future

Against the backdrop of the aforementioned challenges the European Union needs to consider alternative strategic approaches, experiment with new partnership models and examine new funding modalities for external activities aimed at strengthening the EU-China relationship. It is in the European enlightened interest to keep the door open despite China’s hard-authoritarian turn under Xi Jinping. Europeans need to look at EU-China relations from a long-term perspective. When deliberating about suitable strategies European decision-makers should look for clues both in the past and the future. This means to act in solidarity of its long-term partners in China and also make a bet on the future of EU-China relations. Concerned Europeans also need to be aware of the cyclical nature of Chinese politics. Mainland China’s civilisation rupture of the Great Leap Forward in the late 1950s and early 1960s as well as the Cultural revolution from 1966 until 1976 was followed by a decade of relative openness throughout the 1980s. After the suppression of China’s anti-corruption and democracy movement in 1989 an unexpected incremental political opening occured, as exemplified by the exponential growth of Chinese civil society organisations between 1995 and 2012. And while many Europeans now understand that Xi Jinping is here to stay, there will of course be a time after Xi’s reign. In the meantime Europeans should make the best of a difficult geopolitical situation and think about creative ways to continue their critical and constructive China engagement.

One possible way forward would be go beyond the current rather narrow convergence of interests among European and Chinese elites in the realm of politics, business, civil society, media and academia. The European Union should make an explicit offer to the Chinese people to forge a comprehensive dialogue across civilizations. In this context both the European and Chinese civilization is understood to be changing, plural and open. In order to be successful such a dialogue would require both sides of the aisle to embrace the following key principles: a) having faith in people, b) freedom of speech; c) accepting cultural difference without giving up on universal values; d) tolerating intercultural ambiguity and at the same time using methods which allow to voice disagrement, in particular on norms and values; and e) for both sides to display emotional inclusiveness in dialogues, e.g. by ‘taking a stand’ without necessary ‘taking sides’.

Such a comprehensive dialogue across civilizations will only work if Europeans participants give their Chinese counterparts the benefit of doubt. Europeans will also need to be patient, as such a dialogue will only yield outcomes and impacts in the medium- to long-term. Intercultural encounters could be conducted in the spirit of potlatches, a ceremonial feast practices by indigenous people in the Pacific Northwest of the United States and Canada. Potlatches included the exchange of gifts and led to the forging of strong bonds among participants. Gift exchanges did not need to be reciprocated immediately. Instead, it was up to the receiver of a gift whether or not and when to repay the good deed. Such asynchronous reciprocity created the conditions for a virtuous circle of mutual indebtedness. To be absolutely clear and in order to avoid any misunderstandings, dialogue and cooperation between Europe and China would not require the exchange of gifts in a literal sense. The biggest gift Europeans can currently offer their Chinese counterparts is to remain a steady and reliable partner who is willing to listen and learn. Such a European attitude will not go unnoticed on the Chinese side, as Chinese dialogue participants will instinctively understand and will have to accept that Europeans will likewise speak up for their own interests and values. Good practices in intercultural communication and collaboration could help make such a comprehensive dialogue between Europe and China work.

The long-term strategic approach of asynchronous reciprocity should not be misunderstood as Europe conceding too much to the Chinese government in advance. In contrast, its aim is to defend and expand as far as possible public spaces of meaningful civil society cooperation with China co-built over the last 20 years. This is in the interest of Chinese civil society and will be beneficial for China’s long-term political development. The persistence of cooperation could help Chinese NGOs to sustain and survive during China’s political winter by providing them with international attention and recognition, a platform to voice their concerns, opportunities of dialogue and cooperation as well as knowledge and financial resources. In the new hard authoritarian context we should not expect too much of our Chinese civil society partners, as some of them are under threat and have to balance advocacy and survival strategies. As the Chinese government is trying to shape EU-China cooperation by channeling it according to its priorities, reducing some spaces and expanding others, the negotiations about what can be discussed and by whom have to be led and supported by the EU and its member states. The survival of fruitful practices of Europe – China civil society cooperation is a strategic policy issue and of utmost importance for the international positioning of the European Union. From a European perspective the main contentious issues are: the inclusive and plural composition of participants in EU-China dialogue and cooperation, including European and Chinese grassroots NGOs; free speech and horizontal architecture of the EU-China dialogues; the defense of good practices of e.g. co-creation, inclusion, participation, open-endedness, action-orientation, sustainability, transparency, accountability etc.; and the inclusion of themes that might be considered as sensitive by the Chinese government, including human rights (End of Part 1).

Andreas Fulda is research active in the fields of EU-China relations as well as philanthropy and civil society in Greater China. As a consultant he helped design and implement three major capacity building initiatives for Chinese civil society organisations: the Participatory Urban Governance Programme for Migrant Integration (2006-07), the Social Policy Advocacy Coalition for Healthy and Sustainable Communities (2009-11) and the EU-China Civil Society Dialogue Programme on Participatory Public Policy (2011-14).

Horst Fabian has been an academic expert for Cuban development policy and politics before he worked as a GIZ/CIM programme coordinator for East Asia in German Development cooperation for 20 years. From 2000 to 2012 he developed, as part of the CIM programme in China, a civil society portfolio of 30 CIM experts in total, one of the roots of the EU-China Civil Society Dialogue Programme.

Patrick Schroeder is Research Fellow at The Institute of Development Studies (IDS). His main research interests relate to climate change and the global transition to a circular economy. Prior to joining IDS, Patrick was based in Beijing from 2008-2015. He worked extensively in development cooperation programmes of the European Union, including the SWITCH-Asia Programme and the EU-China Environmental Governance Programme. He also has worked for the German Corporation for International Cooperation (GIZ/CIM) as Senior International Advisor to the China Association for NGO Cooperation where he coordinated the China Civil Climate Actions Network, facilitating climate change cooperation between European, US and Chinese NGOs.