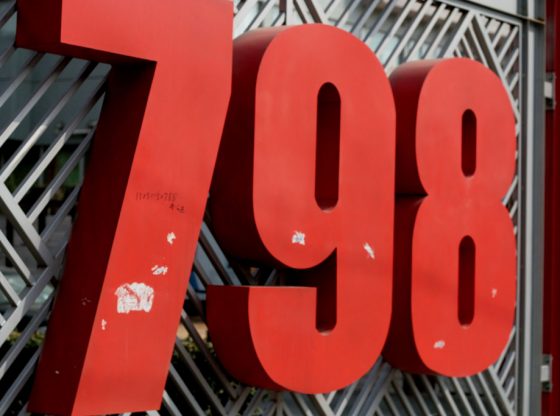 Art, via cultural and creative quarters, has long been used by cities to achieve their aims for urban regeneration and city branding. This is true for many Chinese cities, where creative industries have increased in importance in recent decades. In Beijing, several creative quarters have emerged after a strategy to promote such quarters was announced in 2006. The 798 Art Zone is one such quarter, in Chaoyang District. This was initiated after artists moved into the 798 factory to set up studios and workshops with policy support from the governments of Beijing and Chaoyang District. However, it now illustrates problems of gentrification, with implications for cultural quarters in other cities.

Cinti suggests that creative clusters or quarters refer to areas where a significant concentration of cultural uses leads to what may be called a ‘creative milieu’. More specifically, Zheng uses the term ‘creative industry clusters’, referring to clusters which mainly comprise productive activities. Cities often encourage such clusters since they may bring about a range of social and economic benefits. But they may also lead to gentrification effects – from the increased rents which result – and this can cause displacement of the original artists who populated the areas.

The City of Beijing and Chaoyang District governments both encouraged the Beijing 798 Art Zone, which has a focus on visual arts. It is set on the site of the Dashanzi factory complex, originally developed in the 1950s, and split into components in the 1960s. Now, the 798 Art Zone encompasses the original 798 factory and adjacent area, with a total gross area of 230,000 square metres. Many buildings are rented by artists, cultural institutions and related organisations.

The original development of the Zone was helped by low rents, which averaged 0.3 Yuan per day in 1995, allowing artists to locate here, and which in turn attracted uses such as art galleries. It was helpful that the buildings had large spaces which could be easily adapted to individual needs. There was a focus on the visual arts, with much being contemporary in nature. The Zone also benefited from a good location close to transport routes, and it was close to the Central Academy for Fine Arts and so was used by its staff and students.

These factors meant that the Zone was able to ensure an effective income stream, particularly from galleries and creative boutiques. Certainly, from 2003 to 2009 there was an increasing prevalence of galleries, boutiques, cafes and restaurants in the Zone, attracted by increasing visitor numbers. But this also caused many existing artists to leave, with a clear decline in the number of artists’ studios since 2006.

For many artists, therefore, the Zone might be seen as a victim of its own success. It quickly gained a good reputation and became very popular with visitors, in part because of the Zone’s distinctive nature, related for instance to its public art. Indeed, a 2005 survey of visitors to the Zone showed that they were attracted not only by the art in the Zone but also by its cultural atmosphere. The Zone now often forms part of organised tourist itineraries, and attracts many higher spending tourists.

The Zone has moved in focus towards mainstream tourist uses and away from its original artistic emphasis. There is evidence that most visitors come for general tourism purposes rather than to visit exhibitions or special activities, and many cultural institutions and businesses now include tourism-related activities. This would seem to have added to pressures for artists to leave the Zone since many see it as over-commercialised. This would also seem to have affected galleries in the Zone, since visitors may be more attracted to boutiques and cafes. Thus the Zone’s diluted artistic orientation may be harmful to its long-term commercial potential, and, ultimately, its appeal to tourists.

Clearly, the Zone has been a success as defined by commercial potential, and this was a key reason for policy support for the Zone, with tourism being a key element of the local economy. It also reflects a global approach to cultural clustering which accepts the need for economic development. But many artists argue that an over-dominance of uses such as boutiques and cafes in the Zone is detrimental to its artistic activity, eroding its authenticity and distinctiveness.

This reflects broader arguments in many other cities, with increasing evidence that economic aims can cause core creative content to be diluted. This would seem to suggest the need for greater consideration of the need for an appropriate use and activity mix. For instance, policy might limit retail uses, while encouraging appropriate residential and night-time uses, aiming at an appropriate balance between production-oriented (art production) and consumption-oriented (tourist-related) uses.

What would seem to be harmful in many artistic quarters is the prioritisation of commercial outcomes for property owners – particularly by a focus on high rents and tourism income, and, ultimately, on land and property values. This can impact not only on the needs of artists but also on the capacity of such areas to encourage entrepreneurialism more generally. This suggests that a more appropriate mix of uses might also more clearly achieve aims related to entrepreneurialism in creative industries.

The 798 Art Zone is one of many creative clusters or quarters in Beijing, with many others located in Chinese cities and cities globally. It has become a centre for artistic production, presentation and exchange, related to its unique advantages as well as increasing demand for contemporary art in China. But many argue that the Zone has been increasingly commercialised to the extent that it has lost artistic focus, authenticity and distinctiveness. There is therefore a case for a more appropriate balance of uses and activities which maximise sustainable economic, social and environmental outcomes. This case might therefore suggest lessons for other creative quarters globally.

This piece is based upon a more detailed academic article by McCarthy and Wang (2016).

Video Policy Brief No 9: Including civil society in EU-China relations
The other xinshidai: Taiwan and alternative spiritualities in China