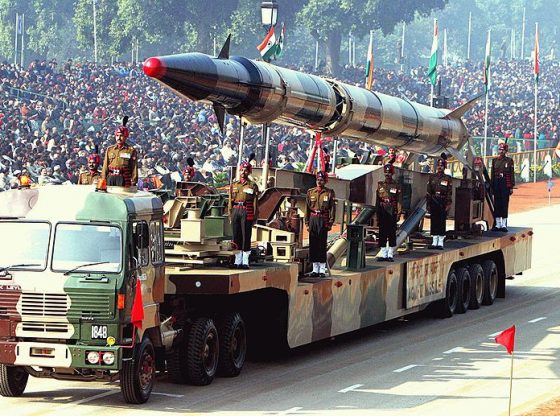 India conducted its first nuclear explosion on May 18, 1974 with Indira Gandhi as Prime Minister. This explosion, termed a Peaceful Nuclear Explosion (PNE), was followed by a hiatus of 24 years. On May 11, 1998 Atal Bihari Vajpayee triumphantly announced that India had conducted three underground nuclear tests, which were followed by two further tests on May 13. These tests were coupled with an announcement of a moratorium on further testing. On May 28 and 30, Pakistan’s conducted its own nuclear tests; the leadership stating that it was the bare minimum response. There have been several competing views on what motivated India to test after this 24-year gap. Differing authors focus on the security dynamics in the region, domestic political motivations and/or a desire for parity in the global nuclear order.

The tolerance for ambiguity in Indian nuclear policies is high; however it has maintained some clear elements in the nuclear doctrine including the moratorium on further testing. Additionally it has three key elements of its nuclear policy – a No First-Use policy, followed by maximum damage inflicting second-strike capabilities, and a credible minimum deterrence. The doctrine also mentions that India would not engage in an arms race and reiterates its commitment to global nuclear disarmament. Resultantly, India’s strategic nuclear culture is characterized by nuclear minimalism.

Conventional studies on India’s strategic culture focus on the influence of political parties, the intelligentsia and the strategic elite in shaping the nuclear doctrine. Strategic culture is seen as the social construction of state behaviour influenced by culture, historical traditions and habits. Studies have variously looked at the role of public opinion, religious symbolism, widely held attitudes and democratic values in understanding India’s nuclear culture. However most agree on a few assumptions. First is the high tolerance for ambiguity. Second is how India responds to the dynamism in the international environment—primarily through restraint. Third is the distinction between India’s nuclear weapons for political or operational purposes and fourthly, India’s shifting dispositions towards disarmament. While some members of the strategic elite advocate for a stronger and more assertive nuclear posture, thereby challenging global nuclear order norms, others call for a minimalist approach, focusing on nuclear weapons expressly for political deterrence.

Myth of the Responsible Nation

In 1998, then Defence and Foreign Affairs Senior Advisor to the PM, Jaswant Singh, referred to the differentiated national security standards as nuclear apartheid.  Ironically, he pointed to the tests as part of India’s quest for global parity and maintained its commitment to universal disarmament. After the 1998 tests, India advanced itself as a responsible nuclear weapon state (NWS); intent on building a strong command and control center.

The doctrine also mentions that India would not engage in an arms race and reiterates its commitment to global nuclear disarmament. Resultantly, India’s strategic nuclear culture is characterized by nuclear minimalism.

The information on the possible steps taken for being a ‘responsible’ NWS were, however, undisclosed. Ambiguity and secrecy have been, and still are, pillars of India’s nuclear program and they directly contradict the ideas of India as a democratic and responsible NWS. A crucial question that is overlooked is responsible towards whom, by what and whose standards? There seems to be a distinct lack of clarity and accountability in these aspects. Additionally, questions relating to the safety, health and environmental impact of nuclear power are either not discussed, remain undisclosed, or the information is obfuscated in technical jargon. However, despite the secrecy surrounding safety measures there have been information leaks. All nuclear reactors in India have had an accident of varying degrees of severity. Secrecy surrounding the costs and the operational intent add to the myth of India being a responsible NWS. Questions are usually fielded by criticisng the questioner for endangering national security. This is especially problematic since safety, health, environmental impacts, economics and the operation are usually perceived as the major problems of nuclear power.

The BJP’s 2014 election manifesto discussed revising and updating the nuclear program according to the changing geostatic realities and maintaining a credible minimum deterrent. The manifesto in combination with the militant sense of Hindu pride that resurged with the BJP’s election led to speculation of change in the nuclear doctrine. In 2017 I noted an abundance of editorials on India’s nuclear doctrine. There seemed be an engagement with the possibilities of change in the doctrine.

However in 2018, less than a year away from the end of its term, the current leadership has not made any changes to the doctrine. The years after the 1998 tests saw a crystallization of the nuclear doctrine but none of the key political or operational elements have undergone major changes. The resurgent militant sense of Hindu pride calls for a dominant and militarily strong nation and this rhetoric, sadly, was reflected in internal politics. It has been 20 years since the 1998 tests with no substantial changes, even to meet the changing geopolitical realities. This continuity in the nuclear doctrine maintains stability and is the right direction for India. However it also points to a failing of the BJP, over-promising and under-delivering.

In the case of India’s nuclear doctrine continuity may be better than change. Though there has been a steady rise in Hindu nationalism with the BJP at the political helm, yet the BJP’s rhetoric is just that. It lacks substantive meaning.

Shreya Singh is a PhD student at the University of Queensland, working on a project which deals with Indian and North Korean nuclear capabilities. She was a former researcher at the Institute of Peace and Conflict Studies, with several publications with the institute. Image Credit: CC from Wikimedia Commons

Sino-Japanese Relations: Economic and Military Challenges
The Documents of Nanjing Massacre, Opening up UNESCO as a New Arena for History (Heritage) Wars