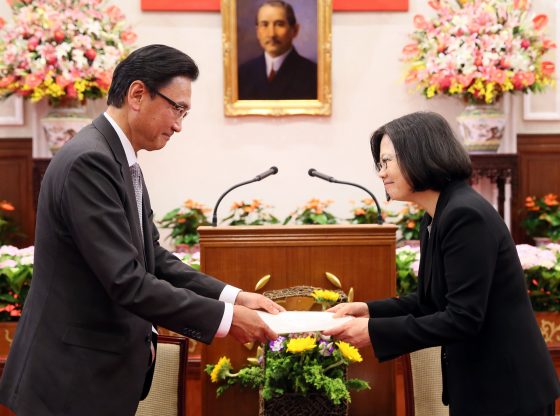 Taiwan has recently become the focus of renewed international concern. The election of President Tsai Ying-wen of the independence-leaning Democratic Progressive Party (DPP) as president of Taiwan in 2016, moves by the new Trump administration in the United States to strengthen relations with Taiwan, and retaliatory Chinese diplomatic and military moves have raised tensions in what remains one of the world’s most dangerous flashpoints. Most of this concern has focused on cross-strait relations between China and Taiwan and US-China relations. Less attention has been given to Taiwan’s relations with Japan. Yet, the relationship with Japan is one of Taiwan’s most important and in President Tsai and Prime Minister Abe Shinzō, Taiwan and Japan have leaders who are committed to strengthening ties. The contemporary Japan-Taiwan relationship is the result of historical change, especially the democratization of Taiwanese politics, and is based not just on shared national interests, but even more so on national identity concerns that pose long-term challenges to a rising China and, potentially, to the maintenance of regional stability.

Japan’s surrender in 1945 ended a half-century of Japanese colonial rule on Taiwan. The ensuing cold war relationship was an uneasy marriage of convenience between former enemies in Japan’s conservative ruling Liberal Democratic Party (LDP) and Chiang Kai-shek’s Nationalist Party (KMT). Motivated by shared opposition to Chinese communism, influential politicians from the right wing of the LDP established direct, personal contact with Chiang Kai-shek and other leaders of the Republic of China (ROC) that proved instrumental in thwarting efforts by the People’s Republic of China (PRC) to use economic ties to advance political relations with Japan.

The two sides, however, had very different views of Taiwan, in both the past and future. ROC leaders saw themselves as liberators of the Taiwanese who would one day reunite the island with China. Suspicious of residual Japanese cultural influence in Taiwan and wary of Japanese sympathy for Taiwanese independence, the ROC banned the Japanese language and imposed Mandarin Chinese as a national language. Often doubtful of the loyalties of local Taiwanese (benshengren), the political system concentrated power in the hands of newly arrived mainlanders (waishengren) and after the 2.28 incident in 1947, when the KMT violently suppressed an anti-government uprising, power was maintained through martial law and a White Terror that subjected dissident Taiwanese to imprisonment and intimidation.

Japanese conservatives, for their part, were often nostalgic for the colonial period, sympathetic to local Taiwanese as former colonial subjects and proud of Japan’s contributions to Taiwan’s modernization. Nor did they share Chiang’s goal of reunification with the mainland, quietly hoping instead for Taiwan’s eventual independence. Close, personal relationships between the pro-Taiwan conservatives and the KMT leadership could not protect Japan-Taiwan relations from the Nixon shock, President Nixon’s surprise announcement in July 1971 that he would visit the PRC. Nor could they prevent the normalization of Japan-PRC relations in September 1972 which ended diplomatic relations between Japan and the ROC, though unofficial relations continue to this day.

Even more profound changes were underway in Taiwan. Chiang Kai-shek passed away in 1975 and was succeeded by his son, Chiang Ching-kuo, who lacked his father’s personal ties to Japan. Chiang Ching-kuo sought to reform the ROC political system and to open the KMT to local Taiwanese in an effort to secure the party’s future as the older generation of mainlanders passed on. In 1986 Chiang brought in the native-born Lee Teng-hui as his vice president. When Chiang died in 1988, Lee became KMT chairman and the first Taiwanese president of the ROC. As president, Lee continued the democratization and localization, or Taiwanization, of the ROC political system, culminating in legislative elections in 1991 and direct presidential elections in 1996, from which Lee emerged victorious in the face of PRC missile tests meant to prevent them. Born and raised in colonial Taiwan and educated in Japan, Lee was always more comfortable expressing himself in Japanese than in Mandarin Chinese. As president, although he did not openly advocate Taiwanese independence, Lee worked to raise Taiwan’s international profile and create international space for Taiwan as a separate entity. After stepping down in 2000, Lee left the KMT to establish a new party, the Taiwan Solidarity Union (TSU) and joined the opposition in openly advocating Taiwanese independence.

Lee also espoused a Taiwanese national identity that encouraged identification with Japan over China. Lee’s government lifted the ban on Japanese language and culture while criticizing the KMT as an alien regime imposed on Taiwan. Lee praised the Japanese colonial legacy for Taiwan’s modernization and cultivated ties with the Japanese right wing, echoing their attacks on the “masochistic” view of Japanese history that dwelt on Japanese colonialism and aggression. After leaving office, Lee argued that the Senkaku or Diaoyu islands, over which Japan, the PRC and ROC all claim sovereignty, were Japanese territory. Not surprisingly, Lee remains popular today among conservatives in Japan today.

The succeeding DPP administration under Chen Shui-bian continued the drive for separation from the mainland and identification with Japan. When the KMT returned to power in 2008, President Ma Ying-jeou committed to improving relations with the mainland and strengthening a Chinese sense of national identity. Ma played up Taiwanese resistance to the Japanese occupation of Taiwan, dedicated a new memorial to Victory in the Anti-Japanese War and the Recovery of Taiwan and reasserted Taiwan’s claim to the Senkaku/Diaoyu islands. While positive relations continued under Ma, Japanese conservatives today enjoy closer relations with the independence-leaning pan-green coalition in Taiwan than with their old KMT allies.

The relationship between Prime Minister Abe and President Tsai is a product of this historical transformation. For Abe, the relationship with Taiwan is a family affair. Abe’s maternal grandfather, and political icon, Kishi Nobusuke, was a primary political benefactor of the LDP’s pro-Taiwan faction and the first sitting prime minister to visit Taipei in 1957. Abe’s younger brother, Kishi Nobuo, acts as the prime minister’s contact with the Taiwanese leadership. Even Abe’s mother gets involved in promoting cultural exchange.

President Tsai got her start in politics as a protégé of Lee Teng-hui, went on to join the DPP and served as chair of the Mainland Affairs Council under Chen Shui-bian. Tsai has also cultivated contacts in Japan and with the Abe family in particular. As a presidential candidate in October 2015, Tsai embarked on a “Japan-Taiwan friendship” mission during which she toured the Abe family’s home prefecture of Yamaguchi with Kishi Nobuo and met surreptitiously with Prime Minister Abe himself.

Since Tsai’s election in January 2016, the two sides have made a series of moves to upgrade the relationship. For example, the ambiguous titles of the offices that handle their unofficial relations were changed to include the names of both Japan and Taiwan. The Tsai administration’s commitment to increase defence spending and cooperation has revived interest in a Japanese Taiwan Relations Act (JTRA), an idea first broached under the Chen Shui-bian administration. Taiwan’s democratization, therefore, transformed the narrow, interparty relationship of the cold war into one between vibrant democracies characterized by popular mutual affinity. Democratization also freed local Taiwanese to express historical narratives and concepts of national identity that stress Taiwan’s separation from China and promote generally positive views of Japan that gratify the historical views and nationalist sentiments of Japan’s conservative rulers.

This makes for amicable Japan-Taiwan relations but also poses a challenge to stability in the Taiwan Strait. Nationalist sentiment in Taiwan can put pressure on leaders to be more assertive in advocating independence. Among Japanese conservatives, there has long been sympathy for Taiwanese independence as a way to recover a more positive interpretation of Japan’s modern history. There is little support in Taiwan or Japan for reunification, and for both sides strengthening relations is a way to stand up to a rising China.  All of this is provocative to a PRC leadership committed to reunification and subject to its own nationalist pressures. While there is little support for an outright declaration of independence, there is a danger of nationalist forces in Taiwan and Japan reinforcing each other to provoke the PRC and upset stability in the Taiwan Strait.

To date, Abe and Tsai have managed these domestic pressures. Abe has proven himself a pragmatic and flexible leader despite international misgivings about his nationalist and revisionist proclivities. Tsai has committed her administration to maintenance of the status quo and has resisted pressure pushing her to adopt public positions in favour of independence. The challenge will be whether the two sides can continue in this pragmatic direction over symbolic assertions of independence meant to gratify nationalist sentiment in Taiwan and Japan.

Dr Robert Hoppens is an Associate Professor in the Department of History at the University of Texas. Image Credit: CC by 總統府/Flickr.

Responses to the sharing economy in Japan and China
The Politics of “Displaying” China: The British Museum and Modern China