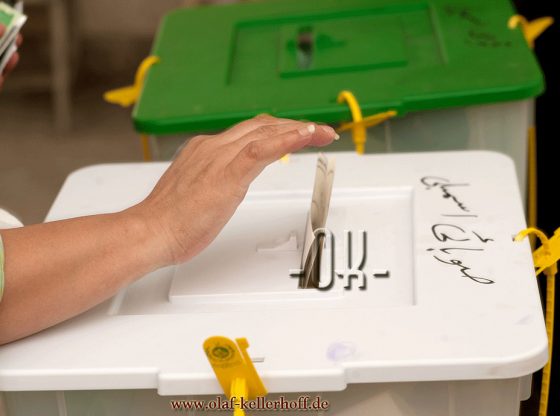 Pakistan’s national elections, scheduled for July 25, are a week away. Yet, given the number of large-scale changes that have taken place over the last month, it is anybody’s guess how these next few days will unfold.

The last week alone has seen a number of momentous events. The return to Pakistan and subsequent arrest of former Prime Minister Nawaz Sharif and his daughter, Maryam, occupied the news on the same day as 149 people were killed and nearly two hundred more injured in a bombing in Mastung, Balochistan, making it the third deadliest attack in Pakistan’s history. Among those killed was Nawabzada Siraj Raisani, a Balochistan Awami Party candidate. Earlier, Haroon Bilour, a prominent leader of the majority-Pashtun Awami National Party (ANP), was killed in a suicide attack that took the lives of 20 people in Peshawar during an election-related corner meeting. A convoy of the religious coalition, the Muttahida Majlis-e-Amal (MMA), was also targeted, resulting in the death of 4 people.

Until this point, the lead-up to the elections had been largely peaceful, especially when compared to the number of violent attacks that had preceded the country’s last elections in 2013 during which approximately 170 people were killed. Yet, as campaigning continues to intensify, the country is bracing itself for more violence.

This targeted violence is just one way in which an uneven playing field has been created for many of the political parties contesting. Indeed, regardless of their outcome, it is clear that the upcoming elections are unlikely to be perceived as free and fair by large segments of the population as well as international observers. In particular, asymmetric application of the corruption statutes and the sadiq and amen (truthful and righteous) clause of the constitution has ensured that the previous ruling party, the Pakistan Muslim League-Nawaz (PML-N), will at a minimum have its parliamentary majority at the national level substantially reduced and, in all likelihood, will find itself on the opposition benches. The Supreme Court disqualified Sharif from office in July 2017, and months later, ruled that Sharif could no longer be the head of a political party.

This was followed, in more recent weeks, by credible allegations of pressure on former members of the PML-N to either switch parties or contest as independents (many with the election symbol of a jeep). Many of these candidates are ‘electables’, those politicians who have independent sources of power and support bases through personal wealth and kinship connections and as such, control a large share of votes in individual constituencies. Recent pressure on the media—what Hameed Haroon, the publisher of Dawn, Pakistan’s largest English-language daily, calls “an unprecedented assault”—are also thought to be part and parcel of a wider campaign to influence the elections.

The nature and degree of intervention by the military is such that many analysts and journalists have likened the existing situation to a soft coup. Members of political parties have not remained quiet either. The secretary-general of the Pakistan People’s Party, Farahtullah Babar, for example, forcibly stated, “Polling is 10 days away but elections have almost already been rigged.” He added, “There has been a systematic, creeping coup.”

So, given all this, what can we expect from the elections? The PML-N is weakened, the leftist Pakistan People’s Party is still struggling, while the Muttahida Qaumi Movement (MQM) based in Karachi has faced even greater military pressure than the PML-N. In addition to anticipated gains by the right-of-center party, and current establishment-favourite, Pakistan Tehreek-e-Insaaf (PTI), there has also been an emergence of many new actors.

Some of these are newly-formed religious political parties, who are beginning to show their strength. For example, nearly 10,000 people showed up in Rawalpindi at an election rally for the Tehreek-e-Labbaik Pakistan (TLP) party, which is reportedly fielding a whopping 571 candidates in the upcoming elections. For a party that was formed only in late 2017, this is an impressive showing. It is also a disturbing sign of an encroaching form of vigilante sectarianism. The TLP was formed in large part to express support for Mumtaz Qadri, the individual who killed the governor of Punjab province in 2011 for defending the rights of a woman accused of blasphemy. The party has not shied away from violent rhetoric. Their election song includes the words “Hang them, hang them!” and their “election posters often carry images of those who have killed in the name of the prophet’s honour.”

Another new party is the Milli Muslim League (MML), the political front of the banned terrorist group, the Lashkar-e-Taiba, allegedly responsible for the 2008 Mumbai attacks. Both the TLP and the MML contested in by-elections in Lahore last year and received 11 percent of the total vote cast. The anti-Shia Ahle Sunnat Wal Jamaat (ASWJ) is also contesting elections in numerous constituencies, and appears likely to make inroads in Karachi where it has been campaigning on the basis of civic issues. While it remains unlikely these parties will win many seats, their presence is certainly strong enough to affect outcomes in particular constituencies. And perhaps most importantly, these are all overtly violent organizations with links to banned, militant outfits who have been responsible for much of the bloodshed in Pakistan over the last few years.

Ultimately, however, pre-election interference by the military and heated social media debates between PTI and PML-N supporters aside, the elections will be determined by who turns out to vote, and how they choose to cast their vote. What determines voting behaviour in Pakistan? A recent New York Times piece strongly argued that in much of the country, local-level considerations about the relative power of local strongmen continue to determine national political realities: “The rural people of Pakistan don’t have the luxury of weighing ideologies and campaign promises of political parties. Who they vote for is determined by a smile, by a disapproving look from the feudal lord.” My own work shows that, while this is no doubt true for large parts of the country, urbanization has weakened the hold of many local feudals, in some places giving greater influence to local religious clerics instead, and increasing the salience of party labels in others. With the old system under structural strain and intense military pressure, Pakistan’s politics are transforming in ways no single actor—not even Pakistan’s military—can fully control.

Dr. Niloufer Siddiqui will be an assistant professor of political science at the University at Albany-State University of New York starting in the fall of 2018. She tweets @NiloSiddiqui.
Image Credit: CC by Pakistan Election/ Flickr

Chinese Cosmopolitanism and the Risk to Queer Identity
Shadow Play: Elite Chinese State Influence Strategies and the Case of Renminbi Internationalisation – Part One