Academic Theory and Practice – The Queer Body in Online Discourse 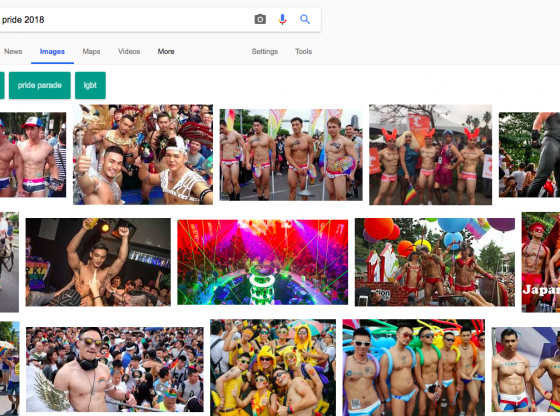 Taiwan LGBT Pride, held on the last Saturday in October in Taipei, has been growing rapidly in the past decade. Last year, the attendance once again broke records, reaching over a million people from around the world. If planning a trip to Taiwan, a quick search of “Taipei Pride 2018” will show a barrage of images of men sporting their muscular bodies. This, as often seen in the media portrayal of Pride in Taipei, has sparked some debates online in Taiwan, with people expressing their concerns or disapproval of these exposed bodies in the public sphere. In this article, I first see these bodies as a departure point for analysis that can inform us of the role that body plays in Pride. Then I discuss the importance of examining the online discourse around these bodies. Last, I introduce a theoretical framework in linguistics for understanding how these comments can shape the social reality.

… when people leave comments online, they are shaping the public discourse

The Speaking Body and Speaking about Body

Body is a site of power contestation and negotiation where privilege and marginalisation can be examined. By analysing body in such an approach, we can better understand how the body is mobilised in any given activity for a certain purpose. This applies to the bodies, or the exposed bodies to be more precise, that appear at Pride parade in Taipei. In fact, Butler has mentioned the body’s capacity of “speaking” politically not through language but through its performativity because action and gesture carry cultural meanings. When a degree of nudity is involved in the street, the bodies perform a subversion of cultural norms that breaks the boundary between public and private. This scene at Pride holds the implication of appropriating body as a symbol that challenges the public views on gender identity and sexuality. However, body as a symbol does not always bear the same meaning for everyone. Hence, it can become a site of contestation, and this phenomenon is particularly noticeable in online comment sections.

Given the anonymity in the context of computer-mediated communication (CMC) as compared to face-to-face interaction, online users usually feel less inhibited from expressing more radical ideas, which makes CMC an environment that is “conducive for public deliberation.” On the one hand, we have online comments that better reflect the nuanced opinions people have on certain issues. Elsewhere I discussed how online comments as data, albeit messier than results collected from carefully administered online surveys, can give us insights into the public discourse. On the other hand, some have argued that, for this reason, social media has become a breeding ground for extremisms. On the flip side, we can turn it into a place for online activism by participating in online discussions, crossing another border between activism on the internet and that in real life.

This is made possible because social reality as we know it is never a given; rather it is discursively constructed. Reality is often represented as different versions of accounts or descriptions, and can be shaped, as much as it shapes our interaction, as we talk, write, or argue about it. According to some linguists who study online discourse, written language such as online comments is the primary resource for creating social reality in CMC. Therefore, when we participate in online discussions over an issue, we are contributing to changing the public discourse and shaping the reality.

A useful theoretical framework for analysing these online comments is “the stance triangle” (image below) proposed by John Du Bois. It is based on the premise that stance-taking is a three-way process: when we evaluate something by characterising it as having a specific value, we position ourselves to that object and claiming responsibility for the stance we take. Finally, in doing so, we align with other stance-takers by gauging the relationship between two stances. When someone takes a similar stance toward an issue, the person and I make similar evaluations and share similar positioning, thereby creating a convergent alignment between us. Conversely, when I disagree with someone, there is a divergent alignment between us. Even if they are not addressing each other, the stance they share indicates that there is a convergent alignment between the two comments. On the contrary, others may respond to such viewpoints by saying, “By your logic, the male celebrities who bare their chests in commercials are filming slutty commercials?” using the same adjective as a rhetorical device to counter that argument. This comment, therefore, has a divergent alignment with the two shown previously.  We can observe that when online users share similar or differing stances, they’re establishing either convergent or divergent alignment that eventually leads to the creation of competing realities in which these bodies are framed differently.

The implication here is that when people leave comments online, they are shaping the public discourse because social reality is discursively constructed. The stance triangle is a theoretical model that illustrates this process by connecting the micro interaction to the macro ideologies. While the body can speak politically, we also need to address how people talk about the body to shift the public discourse so that online activism can go hand in hand with the Pride parade that takes place in the street. By taking this theory into practice, we can be more critical in our thinking.

Ping-Hsuan Wang received his M.A. in Language and Communication (MLC), Linguistics, from Georgetown University. His research interests include gay immigrants’ coming-out narratives, framing in family food talk, epistemic positioning in therapeutic discourse, and stance-taking in computer-mediated communication. You can reach him through email: pw433@georgetown.edu

This article forms part of the Asia Dialogue edition of Queer Asia, in collaboration with the conference and film festival held at the British Museum, SOAS University of London, University of Warwick and UCL from 25 to 29 June 2018, exploring LGBTQ+ issues in Asia on the theme of “Bodies X Borders”. Image Credit: Images provided by the author, with permission

Why the Centre wants Supreme Court to stick only to sexual rights of LGBTQ community
What will be the state of the federation in Pakistan after the elections?