Bangladesh elections will be defining for India and Bangladesh relations

Home /Bangladesh, Elections/Bangladesh elections will be defining for India and Bangladesh relations 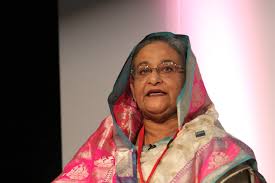 As Bangladesh gears up for the parliamentary elections in December this year, apprehensions about the future of India and Bangladesh relationship are in the spotlight. India and Bangladesh relations have improved steadily ever since Sheikh Hasina formed the government following the parliamentary election in 2008. The upward trajectory was sustained following the 2014 Indian election primarily due to Prime Minister Hasina winning a second consecutive term. The coming elections will be watched closely in India as its results will impact on the future of the relationship.  India’s relationship with Bangladesh remains warm when the Awami League is in power and it deteriorates when the Bangladesh Nationalist Party (BNP) is in power. The bilateral relationship hit rock bottom during the last rule of the BNP between 2001-06.

There has been a dimensional shift in the bilateral relationship over the last 10 years.  The two countries have been cooperating in several areas including security, leading to the peaceful resolution of the land boundary dispute in 2015.  These developments helped boost the confidence of the two countries for deepening their cooperation.  Presently, there are more than 50 bilateral institutional mechanisms between India and Bangladesh in areas of security, trade and commerce, power and energy, transport and connectivity, science and technology, defence, rivers and maritime affairs.

India’s concern in Bangladesh arises out of its internal compulsion of sustaining peace in India’s North-Eastern region.  Four out of the five Indian states sharing 4096 kilometres of border with Bangladesh are in India’s North-Eastern region.  The region has been prone to insurgency movements, many of whose members have enjoyed safe haven in Bangladesh.  Earlier, India repeatedly urged Bangladesh to react against the insurgent groups’ active on its soil.  Bangladesh has formerly been reluctant to do so, but after the election of Sheikh Hasina in 2008, many of the leaders of insurgent groups such as the United Liberation Front of Assam surrendered following Bangladesh’s change of heart

The security of India’s investment in Bangladesh is also a consideration. India has invested substantially in Bangladesh in areas such as infrastructure, including railways and power plants.  India provides an $8 billion line of credit to Bangladesh and a large chunk of it is being spent on developing infrastructure. Many Indian companies have established operations there. During Prime Minister Sheikh Hasina’s visit to India in 2017, the Indian private sector promised to invest around US$13 billion – primarily in the energy sector.

Maintaining a good relationship with Bangladesh stems from the necessity of enhancing the connectivity of NorthEast India with the rest of India.  The land route to ‘mainland’ India is through a narrow corridor at Siliguri in West Bengal, India, which is heavily congested. Bangladesh provides an alternative potential access point. Earlier, this issue of transit to India to reach its North-Eastern region was resisted in Bangladesh. Today, the issue of transit hardly stands as a barrier. Contrarily, the two countries are working towards enhancing connectivity both at the bilateral and regional level.  Bangladesh is an important partner of India in the sub-regional grouping of Bangladesh, Bhutan, Nepal, and India (BBIN), and the countries have signed a motor vehicle agreement to facilitate the seamless movement of vehicles in the sub-region.

Have there been any efforts by India to overcome its bias in dealing with governing parties in Bangladesh?  In 2012, Khaleda Zia, the BNP chairperson, visited India on an invitation from the government. The visit was considered to be India’s outreach to the BNP with an attempt of bringing a semblance to the party’s attitude towards India. In spite of a warm and cordial welcome to Begum Zia during her visit to India, the effort did not yield results.  During Indian President Pranab Mukherjee’s visit to Bangladesh in 2013, Begum Zia declined to meet him.  Recently, a high-level BNP delegation visited India in an effort to mend relations.

Will fortune shine for the Awami League for a third consecutive term?  The Awami League government have been credited for the country’s economic development. Recently, the status of the country will soon be elevated to a middle-income one. The party, however, faces allegations of decimating the opposition through various intimidation measures, which the opposition claims to be politically motivated; curtailing free-media; corruption in the banking institutions and violence by the youth wing of the Awami League.

However, the Awami League is banking on the low credibility of the opposition to attain success in the elections.  The BNP’s credibility has been dented due to the rise of militancy and corruption during its tenure (2001-2006). Additionally, its links with the Jamaat-e-Islami, the rightist political party famous for collaborating with the Pakistani army during the liberation war in 1971, has negatively impacted on the party’s reputation. Following the arrest of Begum Zia in February this year following her conviction in a case of the misappropriation of funds of an orphanage has dampened the morale of the party. The party is facing a leadership crisis since Tarique Rahman, party’s vice chairman and heir of Begum Zia, is convicted in the same case.  The party, however, expressed a desire to go ahead with the election.

It is too early to speculate about the course of politics which will emerge in the post-election Bangladesh. Political parties are yet to figure out their electoral dynamics.  India pursues a policy of non-interference in the domestic affairs of another country and must, therefore, be open to deal with any government that emerges in Bangladesh. However, in a democracy, people of the country will have the final say.