A ‘Dirty’ but Decisive Victory? Pakistan’s political landscape in the aftermath of the general elections 2018 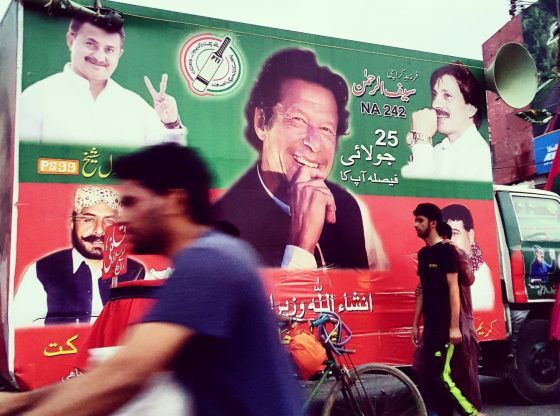 Pakistan’s third consecutive general elections have been called the ‘dirtiest elections ever’. Although such ‘dirtying’ implies political engineering by Pakistan’s security establishment, voters who came to the polls on 25 July came despite the fact the election month was ridden with violence and insecurity. Twenty-two years after forming the Pakistan Tehreek-e-Insaf (PTI), Imran Khan will be voted in as Prime Minister, although the legitimacy of these elections has been widely questioned following speculations of interferences by the military establishment (a symptom of Pakistan’s ‘controlled democracy’), in favour of the PTI. PTI secured 116 National Assembly seats out of 272; to form a federal government, PTI will garner support of smaller parties and independent candidates. The two parties that traditionally held a duopoly, Pakistan Muslim League-Noon (PML-N) and Pakistan People’s Party (PPP), will now sit in opposition. This article analyses some of the significant developments leading to and emerging out of the elections.

TLP’s emergence as an electoral force suggests that religious politics will continue to infuence political narratives in Pakistan.

PTI has emerged as a genuine national party, with victories across Pakistan’s four provinces. But the flip side of PTI’s triumph is the dramatic reversal in PML-N’s fortunes, as the latter fell from 166 seats in the previous National Assembly to 64 seats this time around. PML-N’s path to these elections was rocky; party leader Nawaz Sharif was dramatically ousted by the Supreme Court last year. The ensuing confrontation between Sharif and the judiciary and military escalated, as Sharif campaigned across Punjab, defying and criticising the two institutions. In response, both institutions ramped up pressure on Sharif and PML-N. Accountability courts expedited cases against PML-N members, disqualifying them from running for elections. Nawaz and his daughter, Maryam, were convicted and imprisoned on corruption charges. Many PML-N members, fearful of falling out with the military and judiciary, defected and joined PTI. Thus, the party faced a crisis of leadership, restrictions on campaign activities, and a dearth of candidates. The campaign against PML-N led many international and domestic observers to question the fairness and legitimacy of the elections. In this environment, PML-N was bound to face significant losses.

Karachi’s politics saw a major paradigm shift in these elections. Muttahida Qaumi Movement (MQM), the party that has dominated Karachi since the 1980s, was relegated to 6 National Assembly seats (out of 21 allocated to Karachi) while PTI secured 12, including several in former MQM and PPP strongholds. The MQM suffered setbacks due to multiple factors. Firstly, MQM has been fragmented into two groups contesting in these elections: MQM-Pakistan (MQM-P) and the Pak Sarzameen Party (PSP). Although PSP performed poorly, its campaign divided MQM-P’s vote-bank. These divisions and the subsequent in-fighting hurt MQM-P’s electoral prospects. Secondly, the security operation led by the paramilitary force, Sindh Rangers, resulted in the delegitimization of the party, a state-led clamp-down on its activities (including campaigning for elections), and the elimination of its militant wing. Thirdly, the new delimitation of electoral constituencies saw population increases in each constituency, which meant that respective candidates needed greater financial strength for their campaigns, and financially MQM-P lagged behind PTI and Tehreek-e-Labaik Pakistan (TLP) – a religious party that tapped into Karachi’s Muhajir community, appropriating MQM’s voters. These developments were supplemented by a genuine desire in Muhajir and middle-class voters to turn to alternative political parties, such as PTI.

The emergence of TLP is both significant and ominous. TLP consists of radical Barelvis (Sunni Muslims that form the majority in Pakistan) who support blasphemy laws and campaign against the persecuted Ahmadi community. TLP has emerged victorious in Karachi, Sindh, winning two provincial assembly seats. The party’s campaign targeted low-income voters and voters disillusioned by MQM. TLP was also seen challenging PTI and PMLN candidates in Punjab, coming third in several constituencies and claiming 8-10% share of voters. In constituencies where the TLP stood against PML-N and PTI, it dented PML-N’s vote-bank enabling PTI to perform better. TLP’s emergence as an electoral force suggests that religious politics will continue to infuence political narratives in Pakistan.

if the PML-N is able to leverage its continued popularity and form the Punjab government, this will weaken PTI’s central government.

PTI’s victory may herald a new phase in Pakistani politics, but a few fundamentals of Pakistan’s electoral landscape remain the same and will continue shaping domestic politics. PPP has comfortably secured its third consecutive term of government in Sindh. PPP’s consistent performance in Sindh, outside Karachi, in spite of widespread discontentment with its governance, speaks to the disinterest of other major national parties in meaningfully participating in Sindhi politics. The primary opposition to PPP continues to come from small individually-run parties (sometimes backed by major national parties) and Islamist parties.

While PML-N lost significant ground, particularly in the National Assembly, its presence and popularity in Punjab persists. Out of a total of 371 provincial assembly seats in Punjab, PMLN retained 129, with PTI securing 123 seats. Both PML-N and PTI will seek to form a government in Punjab, and both will court the support of independent candidates and other parties. Historically, any federal government that has ruled without control of Pakistan’s most populous province has been vulnerable and unstable. If PTI forms the Punjab government, it will be the first time since 1985 that Punjab has not been governed by a faction of the Muslim League. But if the PML-N is able to leverage its continued popularity and form the Punjab government, this will weaken PTI’s central government.

These elections also demonstrated that political parties continue to rely on ‘electables’ to ensure victories. Electables are local power brokers who maintain patronage machines in individual constituencies. They often act as ‘free agents’ moving in the direction of whichever party they believe can best secure their interests. In the run-up to the elections, many electables who had joined the winning PML-N ticket in 2013 realized that the military opposed PML-N and switched their oyalties to PTI, helping to secure PTI’s victory. Imran Khan himself emphasised the recruitment of electables as a cornerstone of his electoral strategy. Recruiting ‘electables’ remains the shortcut to electoral power, but is vulnerable to electables defecting in the future. The ‘electable’ strategy also ensures that parties pay little attention to building ideological programmes as an electoral strategy, and ideological cleavages remain largely irrelevant in explaining the direction of Pakistan’s national politics.

In all likelihood, Pakistan’s foreign and regional policies in the next government will be guided by the parameters set by the military establishment. Although Khan’s victory speech noted his intentions to strengthen relations with China and Afghanistan and improve working relationships with the United States and India, PTI’s foreign policy agenda has traditionally been unclear and Khan’s recent statement mirrored the stances taken by the military, especially on Kabul and Kashmir. Pakistan’s regional and foreign policies are intimately connected with Pakistan’s national and domestic security policies, which are traditionally the domains of the security establishment. Therefore, the incoming government will likely defer to the military on matters pertaining to relations with international partners and neighbours.

But differences may arise in respect to domestic policies. Khan’s rise to power benefited from interventions by Pakistan’s most powerful institutions: the military and the judiciary. During PML-N’s tenure, Imran cheered on these institutions to shrink the governing space occupied by elected institutions, denigrating and delegitimizing the very institutions he now controls. Now that he has taken power, will he accept the terms of authority outlined by the military and the judiciary, or will he seek to wrestle control from these guardian institutions? Today, both institutions have moved outside the barracks and the courts. The military dictates foreign and security policies, as well as centre-periphery relations. Activist Supreme Court judges now intervene in a range of policy matters. For Khan to execute any of his policy agendas, PTI will have to gain more governing space. The judiciary and the military have previously justified their interventions on the ostensible grounds of eliminating corruption. What happens the party in power also promises to combat corruption? As each institution seeks the independence and authority to carry out this agenda on its own terms, they will inevitably clash. Thus, the campaign that helped bring Imran to power could potentially lead to his downfall. The shadow of unelected institutions looms large over Pakistan’s political landscape. Khan can learn from the fate of arch-rival Nawaz’s short-lived governments in the 1990s, that emerging out of their shadow requires a different sort of politics than what Khan has practised so far.