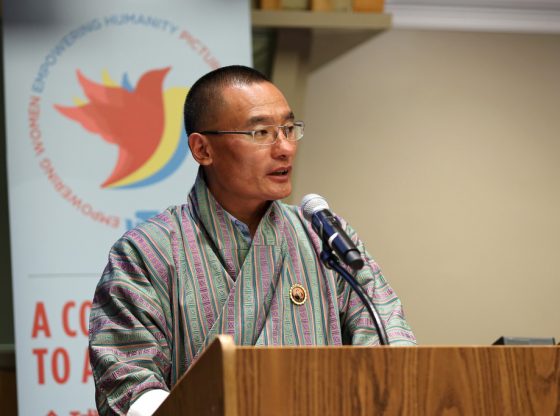 The incumbent government in Bhutan is completing its full-term on August 1. It is only the second government to be elected to power in the Himalayan kingdom after a new constitution was promulgated and general elections held in 2008. On a heretofore uncharted path of democracy, the fifth Druk Gyalpo, Jigme Khesar Namgyal Wangchuck, sustains his unique position at the helm of Tsa-Wa-Sum (translated as nation, people and the king) in Bhutan.

The most important task for the new government is to ensure a smooth transition from LDC.

The five years’ tenure of the government was successful. The government’s term coincided with the 11th Five Year Plan (2013-18) that prioritized making the economy self-reliant through focus on increasing the cover of plan expenditure from domestic revenue. The successful conduct of the second local government elections in 2016 was an additional feather in the cap of Tshering Tobgay’s led government. The first such elections held in 2011 were riddled with problems and a low-voter turnout. A triennial review of Least Developed Countries (LDC) by the United Nations (UN) recommended Bhutan’s graduation from the LDC’s by 2021. Bhutan is the only Asian country (the other three being Kiribati, Sao Tome and Principe and Solomon Islands) to have graduated from LDC status..

In the year 2016 Bhutan was applauded for setting the ‘most ambitious pledge’ during the climate talks in Paris or Conference of Parties (COP) 21. In the Intended Nationally Determined Contributions (INDC’s) submitted by the country, Bhutan revealed it emits 2.2 million tonnes of carbon dioxide equivalent CO2 against the sequestration by forests, which is about 6.3 million tonnes of CO2. Bhutan also pledged to maintain 60 percent of its forest cover.

Relations with China and India

Political relations with India were strengthened by the Prime Minister of India’s visit in 2014; Modi’s first foreign trip abroad as Prime Minister. During his visit, Modi had said: “Bharat should stand for Bhutan and Bhutan for India.” The thrust placed by the Indian Prime Minister on reciprocity signalled a new dimension in the importance of the Himalayan kingdom for New Delhi.  Modi’s visit followed the signing of a pact for construction of four hydropower projects. Also, under the stewardship of Tshering Tobgay, for the first time, a trilateral hydropower cooperation initiative was taken along with India and Bangladesh, the latter approving USD 1 billion for the 1,125 MW Drojilung hydropower project in Eastern Bhutan.

Land-locked, between two competing powers, Bhutan was mired in a military stand-of between her Northern neighbour, China and India at Doklam that is at the strategic tri-junction of the three countries. The building of a road by Bhutan’s northern neighbour in a disputed territory saw the kingdom, except one instance of rebuffing China’s claim; silent throughout the three-months’ long standoff. However, Bhutan’s backdoor efforts of putting pressure on both her neighbours was hailed as being a nouvelle diplomatic initiative in resolving the standoff between the second largest and third largest militaries of the world.  Owing to the Doklam standoff the boundary talks between Bhutan and China remained suspended. China is yet to have formal diplomatic relations with Bhutan although it has recently renewed its proposal for establishing the same.

The Bangladesh-Bhutan-India-Nepal (BBIN) Motor Vehicles Agreement (BBIN-MVA) that was aimed at achieving seamless movement of passenger and transport vehicles among the BBIN countries could not be ratified by the parliament of Bhutan in 2016. The parliament’s (the National Council’s) function as the house of review was highlighted by the verdict handed out on BBIN-MVA.  After the lower house of the parliament – National Assembly (NA) acceded to the BBIN-MVA, a National Council (NC) session in November of 2016 rejected Bhutan’s accession to the agreement citing costs to the country’s environment and culture as pitfalls to the agreement. The Tshering Tobgay government pushed hard for ratification arguing that BBIN is not restricted to road connectivity alone, but opens opportunities for cooperation in areas of energy, trade, information and communication technology and tourism.  However, the government’s optimism faded in the following months as concerns about the impact of the MVA on the environment, economy and security of the country began to ring alarm bells in Bhutanese official circles, especially among the opposition party leaders. Consequently, the Parliament decided to revoke the agreement after it was endorsed.

Tasks before a new Govt.

The most important task for the new government is to ensure a smooth transition from LDC. Implementation of the Nu 300 billion 12th Five Year Plan is crucial since the plan aims at economic growth through the Gross National Happiness principles of safeguarding environment and culture and ensuring a good governance system. Thimphu needs to work on increasing productive capacity to graduate from Least Developed Country status.

A new government will also have to decide upon whether it joins the BBIN-MVA. Presently, Bhutan is attending meetings of the inter-governmental taskforce only as an observer. Excepting the Motor Vehicles Agreement, Bhutan is participating in the energy, trade and ICT cooperation between the South Asia Socio-Economic Cooperation (SASEC) initiative of the Asian Development Bank. Cooperation in hydropower is already shaping up for Bhutan with the trilateral Dorjilung hydropower project involving Bhutan, Bangladesh and India.

Decades onto the self-charted path of democracy, the electorate, one-third of which are young, have high expectations from their government.

Mihir Bhonsale is a Junior Fellow at Kolkata Chapter of Observer Research Foundation, a leading public policy think-tank in India. He tweets @MBhonsale. He can be reached at mihirbhonsale@gmail.com. Image Credit: CC by Tshering Tobgay/ Flickr.

The 2018 Pakistan Elections: Status Quo over Change
Sino-Malaysian Relations: A Brand-New Engagement in a New Era