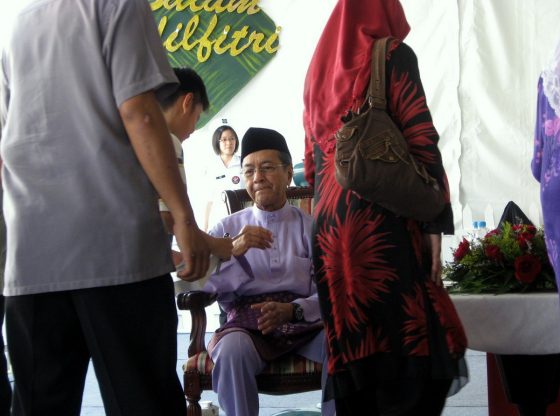 After the historic election in May 2018, some pundits predicted that the newly elected Pakatan Harapan coalition government of Malaysia, under the leadership of Mahathir Mohamad, would take a less China-friendly foreign policy. This point of view is often based on the fact that several of China’s mega infrastructure projects were alleged to have been vehicles for corruption of the previous Prime Minister Najib and that Mahathir and other Pakatan leaders have severely criticised these projects. However, this is a flawed interpretation. Mahathir himself dismissed the idea that he is “anti-China” and he has a very strong history to back it up, if we care to look into his views on international relations and on China during his first term in power.

On many international and developmental issues, Mahathir’s views and those of the Chinese leadership have converged remarkably.

Mahathir did have alarmist views of China in the 1980s, but by the 1990s he had come to hold a much more benign view of China. He visited China seven times during his first tenure as Prime Minister (1981-2003), and built a good rapport with Chinese leaders Jiang Zemin and Zhu Rongji. It was the Mahathir’s administration, in 1991, when Malaysia served as the ASEAN Chair, that invited China to begin a dialogue relationship with ASEAN (upgraded to dialogue partnership in 1996). Mahathir openly praised the role played by China in averting a greater meltdown of the Asian economies during the financial crisis in 1997-1998. And in 1999, he signed a comprehensive bilateral cooperative agreement with China.

On many international and developmental issues, Mahathir’s views and those of the Chinese leadership have converged remarkably. For instance, Mahathir has criticised the kind of neoliberalist version of globalisation preached by the Western powers that he argued was particularly harmful to the developing countries, a view reinforced by the bitter experience of the Asian Financial Crisis in 1997-1998. Yet developing countries should not reject the global capitalist economic system, instead they must develop their own independent judgement and formulate policies that are most suited to their conditions. This developmental philosophy is shared by China. Mahathir would have approved of the way China has managed its own economy through statist interventions and industrial policies.

As a developmentalist, Mahathir also saw the value in building major infrastructure connectivity linking different regions within a country and across countries. He was one of the first proponents of the idea of a Pan-Asian Railway, linking the Chinese city of Kunming all the way to Singapore. Although he rejected Malaysia’s High Speed Rail (HSR) project with Singapore, his Pan-Asian Railway could facilitate a new form of infrastructure cooperation between China and Malaysia especially under China’s Belt and Road Initiative (BRI).

As a Pan-Asianist, he advocate the primacy of Asian agency in the future of Asia and has not welcomed the meddling into Asian affairs by Western powers. He proposed the East Asia Economic Grouping (EAEG) in the early 1990s, hoping to forge an Asian version of the European Union, but the proposal was foiled by Japan and the United States. He has always bitterly complained how his idea of EAEG was not appreciated by other powers, despite his belief that such a regional organisation could integrate all East Asian countries and serve as a platform for lasting peace. China was the only major power that supported his idea. Xi Jinping once suggested the idea of Asian Security Concept in the Conference of Interactions and Confidence-Building Measures in Asia (CICA) in 2014, and EAEG seems to fit with Xi’s idea.

On the issues of South-South Cooperation, “Asian Values,” and what the Chinese call “the democratization of international relations,” Chinese leaders will find Mahathir’s views resonating with their own also.

In terms of China as a threat, Mahathir has since the 1990s always dismissed the so-called “China Threat Theory,” by pointing to the story of Zheng He (Cheng Ho) in the 1500s (in contrast to the colonial conquests from Europe), and the logic that if Southeast Asians treated China as an enemy and tried to gang up against it, China would respond as an enemy. In one of his books, Reflections on ASEAN, he wrote the following:

“Southeast Asia has the most to fear from China’s expansionism. Unless China is provoked that fear is misplaced. In today’s world military conquest is unnecessary, costly and counterproductive. We do not think China would indulge in military adventures. There is therefore no reason for Southeast Asia to fear China’s military might. But establishing a mechanism for defusing potentially dangerous disputes is necessary. The East Asian Economic Grouping can provide this mechanism.

China has assured Southeast Asia that the dispute over the Spratly islands can be resolved through negotiations. Southeast Asia should take China’s word for this and begin serious discussion on a common stand over China’s and each other’s claims.”

Hence, based on this past record, China actually should feel very comfortable with Mahathir leading Malaysia once more. Of course, Mahathir’s relatively benign assessment of China was undertaken when China was still the kind of power following Deng Xiaoping’s dictum of taoguang yanghui  (keeping a low profile) and its economic and military strengths not as strong and powerful as today. Today China is a formidable power, economically greater than Japan, and increasingly its military muscles are flexed in the South China Sea. Mahathir also seemed to have expressed some concerns that China poses a long-term threat to the region, especially under the current leaders who are “more ambitious” and therefore “worrisome,” according to an interview with Financial Times. It should be noted, however, that although the title of this interview purportedly was about how Mahathir saw the rise of China today, there was actually very little about China in that article, and Mahathir did not really explicate and articulate his views on China in the interview. It is safe to say that Mahathir has continued to hold the majority of his views on international relations and China when he was in power.

It should be clear to Beijing that Mahathir’s victory represents a historic and strategic opportunity. In Mahathir, China could not have found a better leader with such a strong nationalist credibility, senior statue, and strategic vision to forge a good and sustainable relationship and even to construct a regional order together. He is first and foremost a pro-Malaysia nationalist, and he would have the credibility to deal with China. Much will depend on China’s behaviour also. If China manages to work with the new government of Malaysia in investigating the alleged corruption or irregularities of those projects under Najib, renegotiating these projects in good faith to reduce the financial burden of Malaysia, and on the South China Sea issue, moderates its assertive behaviour, Beijing will find that Malaysia under Mahathir will continue to be a supportive country for China’s BRI, and a “Comprehensive Strategic Partner” of China.

Dr. Ngeow Chow Bing is the Acting Director of the Institute of China Studies, University of Malaya. Image Credit: CC by CLF/Flickr.