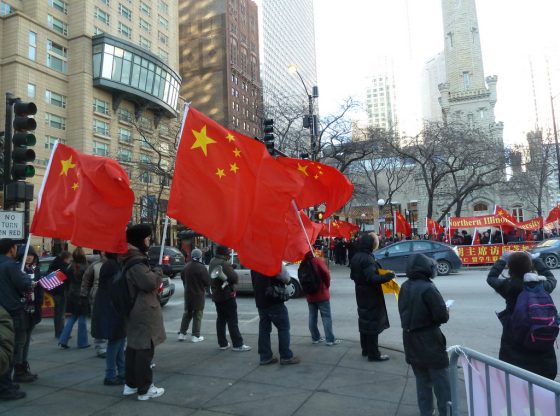 Scholars and media pundits have long examined the Chinese government’s efforts in encouraging nationalism among its people. A broad consensus emerged that such campaigns serve a crucial political purpose: to support the regime’s legitimacy. It is true that Beijing intensified nationalistic education since 1989 when the government violently put down a mass pro-democracy movement. It is also true that nationalism is about “we-they” feeling, and that in Chinese collective memory, Japan would be the easiest target for being constructed as the “bad guy.” As Deng Xiaoping once said, “on betraying and persecuting the people of China, Japan is No.1.”

Since then, however, hating Japan and, to a lesser degree, cursing America, has become an institution that acquired a life of its own. It is no longer purely a political process. Rather, it has earned its own economic logic and evolved into a billion-yuan patriotic propaganda industry. To borrow a famous Godfather quote – to many Chinese, there’s nothing personal about hating Japan or cursing America. It’s only business.

To find evidence of such commercial nationalism, one needs to look no further than at the virulent spread of the so-called Kangrishenju (farcical anti-Japanese TV series). In one notorious example, a Chinese woman visits her lover, who had been jailed and tortured by Japanese captors. After much fondling and kissing as a Japanese military officer and his Chinese interpreter stood by, the Chinese hero pulled a grenade from the woman’s crotch. He shouts: “Let’s have another great time!” and detonates the grenade, killing everyone in the cell. As outlandish as the plot is, it probably would not have attracted intensive public opinions had the female character not been played by Ge Tian – allegedly China’s most famous divorcee at the time as she was ending her marriage with celebrity athlete Liu Xiang. Without Ge’s association with her famous husband, the drama, titled Together We Fight the Devils, was simply one of the numerous war dramas that inundated TV channels.

From a more serious perspective, some military officers and intellectuals have become frequent guests of commentary programs, offering allegedly expert analysis of Chinese foreign policy. These publicity hunters, the media, and the masses together form a commercial ecosystem. Because their messages are uniformly pro-government, patriotic public intellectuals and military top brass have paradoxically gained a higher degree of safety from governmental monitoring. The media, domestic and international, love reaching out to them, particularly those in uniform, because they know there is a good chance they will say something scary and sensational. For example, Rear Admiral Zhang Zhaozhong once assured the Chinese audience on national TV they should have no fear of the American navy — “our fishermen in the Yellow Sea placed a lot of fishing nets to farm seaweeds. Those nets and the plants would entangle and trap the American submarines.” This comment has earned him a moniker — Admiral Seaweed (haidai jiangjun). Known for his self-deprecating persona, Admiral Zhang gladly embraced the title.

To media practitioners and people in the entertainment industry, to be patriotic simply means good business. In 2012, for instance, the government approved 303 new TV shows. More than half had a “revolutionary” theme, and of those, the vast majority were depicting the anti-Japanese war. For producers then, any show about fighting the Japanese would be bullet-proof when applying for a license. Production was also fast and cheap – the Japanese, after all, is an Asian race. Directors could simply hire an army of Chinese temporary actors to pretend to be Japanese, most of whom were from rural areas lured by a salary of $7 per day. To be fair though, there was at least one incident when viewers found a black actor playing the role of a Japanese soldier, which created a déjà vu of racial diversity meeting World War II.

Whether the Chinese peasant actors could deliver a convincing performance as Japanese soldiers would be of little importance. Many such shows are broadcast in the daytime. It is thus reasonable to assume that a key group of the audience they want to attract are retirees or those in rural areas. As a piece of corroborative evidence, such shows are often sponsored by companies selling herbal medicines or promoting alternative therapies. They can also serve as visual fast food: in one episode, viewers could see martial arts, weapons, explosions, high-speed chases, an astronomical amount of blood, and China’s success. With these many striking images and a guaranteed victory, who cares about the plot? Another reason, as China’s own national Xinhua News Agency, points out, is that many stories feature females that are sexually assaulted or, in the case of the Crotch Bomber, sexually seductive. They thus are using sex and violence to lure male viewers. To put it another way, even pornography can become patriotic.

Local governments are one more group benefiting from this booming patriotic propaganda industry. Hengdian, a small town in Zhejiang Province, has become a giant studio that generated 16.5 billion yuan of tourism revenue in 2016. The town advertises itself as the “Oriental Hollywood.” During the Chinese New Year break in 2013, staff were still working overtime in the town to produce 19 TV shows, ten of which were about fighting the Japanese. On an annual basis, studios in Hengdian alone would churn out close to 50 TV shows featuring the war against Japan. Shi Zhongpeng, one of the many temporary actors, told a reporter that on his busiest day, he reported to eight different shows featuring the war and – he died eight times that day as a ‘Japanese devil.’

In the past two years, a new trend has emerged: investment is now turning to big-budget, big-screen productions. In 2017, the Chinese action movie Wolf Warrior 2 broke numerous box office records – it yielded the biggest single-day gross for a Chinese movie. With a total gross of $ 874 million, the film became the second highest-grossing movie of all time in a single market behind only Star Wars: The Force Awakens. The movie tells the story of a ‘Chinese Rambo’ going around the world punishing those who offend China. It ends with a shot of the cover of a Chinese passport and an accompanying message: “Citizens of the People’s Republic of China – when you encounter danger in a foreign land, do not give up! Please remember: at your back stands a strong motherland.” The movie’s massive commercial success demonstrates the lucrative potential of consuming patriotism.

An unintended consequence is the result of the success of patriotic blockbusters. People have invited drama into reality. At airports and seaports in Tehran, Bangkok, Tokyo, Nagasaki, among other places, people witnessed odd scenes of angry Chinese tourists singing the Chinese national anthem and clashing with local police. They were not protesting against the violation of the One China policy or issues in the South China Seas. Rather, they were stranded tourists facing flight and cruise delays. Thanks to movies like the Wolf Warrior 2 and its heart-warming ending message, many Chinese tourists now see any experience of being inconvenienced as offending their national pride. With more patriotic movies coming to their towns, and more Chinese heading overseas, the Chinese national anthem may be more frequently heard in unlikely places.

Dr Jing Sun is an Associate Professor in the Department of Political Science at the University of Denver. Image Credit: CC by Fuzzy Gerdes/Flickr.

Why China might welcome a ‘Hard Brexit’
UK-China relations: the Hong Kong conundrum