Autopsy of a protest in Bangladesh

Home /Bangladesh, Law and Justice, Social movements, Youth/Autopsy of a protest in Bangladesh 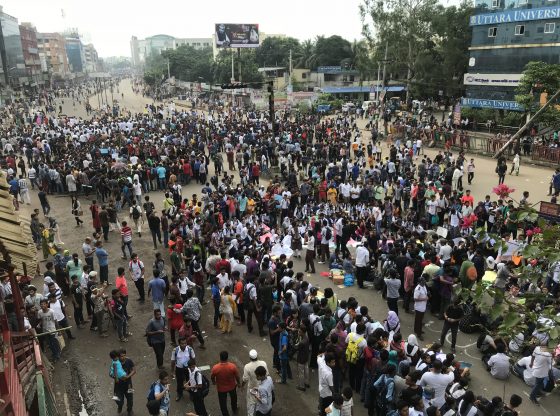 Two school students were killed by a bus in Dhaka. Thousands of students took to the streets to protest peacefully on 29 July 2018. They brought the capital to a standstill for over a week. They inspired fellow students in other towns and cities to follow their example and show solidarity. Their peaceful civil disobedience was tantamount to self-governance, in a country where those who are meant to govern and serve the people have been failing.

They are not politically motivated, and fiercely protected their nascent, spontaneous movement – which developed organically – from being infiltrated or appropriated by self-serving, opportunistic government and anti-government factions. They policed themselves by wearing uniforms and checking student identity cards for verification, and remained respectful, peaceful and sensible even in the face of provocation and intimidation.

Road safety is non-existent in Bangladesh, with successive governments indulging a system broken by corruption and the suspension of rule of law for petty financial and political gains. Deaths on roads occur every day, are reported without ceremony and forgotten without sensitivity. That this double vehicular manslaughter caused such a phenomenal collective action is indicative of the deep resentment felt towards an autocratic government.

Yet, the elite and ruling classes’ response suggests they are either oblivious to their rising unpopularity, or, ensconced in the invincibility of authoritarianism, simply do not care. Children were beaten bloody on the streets and at educational institutions of Bangladesh. The elites and the ruling classes laid the groundwork for this violence, justifying it by dismissing or discrediting the protests, obfuscating with false equivalences, and raising the spectre of the worse evils that are alternatives to this government – the unholy trinity of Bangladesh Nationalist Party and Jamaat-e-Islami, the civil society and the military.

Children were assaulted by Awami League cadres and the police with impunity, and the elite and ruling classes insist that this fact is, as per the rhetoric of the far right, rumour and “fake news” perpetrated by anti-state enemies of the people. Their efforts and narratives have been aided by the targeted disruption of the internet and telecommunications networks, and a crackdown on the media that has left several journalists, including an Associate Press photojournalist, injured, and their documentation destroyed.

If only members of these two classes paused for breath between outlandish proclamations for which no proof is ever offered, they would see that the people they pretend to serve, view them as the enemies. They are busying themselves with brazenly silencing and erasing the truth in every conceivable way, but their unjustifiable, deplorable, unforgivable violence only reaffirms this view.

A government that sees conspiracies at every corner while failing to convince the populace of its supposed accomplishments, is one that is severely weak and insecure. A government that brutalised university students when they protested peacefully for quota reform earlier in the year, and school and university students who demonstrated for road safety in the last few days, is one that is so lacking in compassion that it either has embraced extinction by disenfranchising the nation’s future, or believes firmly that authoritarianism will grant it immortality. A government that used draconian laws that make freedom of speech and expression criminal offences, so that mainstream and citizen journalists faithfully reporting the truth can be denounced, abducted or arrested, is one that invites questions about its legitimacy.

Awami League has shown itself to be all of this. The party is counting on people forgetting, to get on with the daily grind of surviving amidst dysfunction. There is merit to this line of thinking. The plight and voices of indigenous people, freethinkers, religious and ethnic minorities, workers, environmental activists and the poor all met violent opposition from law enforcement agencies and party loyalists, and have all seemingly been forgotten. Prime Minister Sheikh Hasina, who echoed her senior leaders and belittled the protesters and their movement, will reassure herself, assuming safety in India’s support, and the unquestioning allegiance of the elite class and law enforcement agencies.

Regrettably, her government is also normalising absolute rule. Some may argue that the Awami League will be able to extricate itself from this mess by, finally, providing good governance with justice and accountability, but it will need to break a decade-long habit to do so, and may not have yet another chance. Another strong reason for eschewing good sense is that the sycophantic loyalty that keeps the Awami League in government is very expensive, and regulations are an obstacle to accruing wealth. The party’s lust for power and its trappings has left the country in a desperately precarious position.

The first week of August 2018 will be remembered as the time when Bangladesh realised the dream of egalitarianism, however briefly, and caught a hopeful glimpse of how it can be a functioning state, free from corruption. The last few days of that week will be remembered for the country losing its innocence, shamelessly, mercilessly, incontrovertibly. These days will be remembered as the time when the cowardly, morally bankrupt, individualistic adults were taught the lessons of collectivism and positivism by defiant children who resisted long after the adults had submitted.

The Awami League government has reacted to dissent with violence in every instance of deviation from its narrative over the past few years, but in taking the same stance against children, it has committed a cardinal sin. People remained apathetic when the precedent was being set and reaffirmed through repetition. Now that the mask has fallen, and it is clear for all to see that no depth of depravity is repulsive or unattainable for this government, it has ensured that an everyday tragedy – deaths on the road – triggered a turning point in Bangladesh’s socio-political status quo.

Conscientious citizens and the students will hope that the populace will find courage where there is now fear, and work towards positive, sustainable change. However, the danger that the Awami League has ensured that a feudal, corrupt autocracy is the only way to rule Bangladesh is very real. On the other hand, this could all be moot, since it is possible that the government is telling the truth, making liars of everyone else.

Ikhtisad Ahmed is a human rights lawyer turned writer from Bangladesh and a University of Nottingham alumnus. He tweets @ikhtisad. His website is http://www.ikhtisadahmed.com. Image credit: CC by Asivechowdhury/Wikimedia Commons.