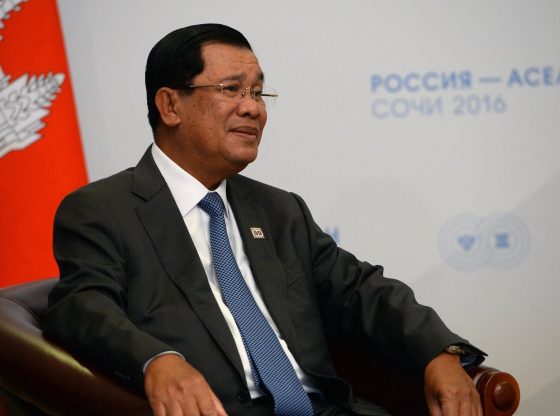 The Marxian observation that historical events repeat “first as tragedy, then as farce” identifies a particular type of spiral repetition which can be observed in the 2018 General Election in Cambodia. This election may be paired with the country’s tragic General Election two decades earlier.

The 1998 General Election in Cambodia was held in the aftermath of a violent coup d’état. Hun Sen’s 1997 coup included the killings of over 70 Funcinpec members and left him as the sole Prime Minister. The 1998 General Election, which was organised at the urging of ASEAN, resolved the international crisis caused by the 1997 coup but left Hun Sen and the CPP in power.

Cambodia is once again functioning as the location for a new proxy war, this time with China leading the alternative to the US-led liberal world order

In 2017, the CPP-dominated National Assembly pushed through legislation that allowed for the dissolution of any political party that was found to have ‘conspired with traitors’. This allowed the CPP-led government to file a complaint against the CNRP after its president Kem Sokha was arrested and charged with treason. In November 2017 the Cambodian Supreme Court ruled in favour of the dissolution of the CNRP and banned over a hundred of its senior leaders from politics. With the CNRP gone, the opposition field comprised a motley collection of minor parties which had little hope of electoral success.

The need to dissolve the CNRP can be traced back to the 2013 General Election, when the CNRP made major gains against the CPP, which lost the two-thirds parliamentary majority it needed to amend the Constitution. The CNRP’s striking ability to mobilise mass support—as demonstrated in its organisation of mass anti-government protests in Phnom Penh in December 2013—would fuel the government’s later accusation that the CNRP had been plotting with the US to stage a “color revolution” in Cambodia.

The government’s dissolution of the CNRP was supplemented by its suppression of the country’s independent media, including the closures of the The Cambodia Daily, and the radio stations Voice of America Cambodia, Voice of Democracy, and Radio Free Asia Khmer. This limited the spread of opposition viewpoints among the Cambodian electorate, and two days before the election the government also blocked access to independent media websites.

The dissolution of the CNRP and the suppression of the independent media gave the CPP an easy victory in the 2018 General Election. While exiled leaders of the CNRP such as Sam Rainsy had issued appeals from overseas for their supporters to stage a mass election boycott, the government pressured the electorate to come out to vote. The National Election Commission declared voter turnout to stand at 82.7 percent, a significant increase from the 69.6 percent turnout in the 2013 General Election. In his final election campaign speech, Hun Sen firmly denounced the exiled CNRP leaders’ calls for an election boycott:

“People who listen to the words of the country’s betrayers, and don’t vote, are the ones who destroy democracy in Cambodia. You will regret it. So I suggest all Khmer citizens think about that, because the majority of people will vote but the ones who don’t vote, how will they live with those who do? [sic]”

Dissatisfied CNRP supporters who were pressured into voting were able to register their unhappiness at the ballot box by spoiling their votes, and “8.4 percent, of the 7.64 million votes cast, were invalid and spoiled … By comparison, spoiled ballots in the last election, in 2013, comprised just 1.6 percent of the total.”

The farcical nature of the 2018 General Election raises the question of the inspiration behind the CPP’s comparatively gentler method of legally ousting the CNRP from the electoral contest as compared with its violent crushing of Funcinpec in 1997. As it turns out, the dissolution of the CNRP mirrors similar measures taken against a major political party in neighbouring Thailand.

Another factor that accounts for the depth of the civil society and media outrage over the CNRP’s absence from the 2018 General Election is China’s growing influence in Cambodia, which the CNRP leaders had long denounced. The Nikkei Asian Review was representative of the recent international media coverage of Cambodia with its July 19, 2018 print edition which had the blunt cover headline “Cambodia’s Chinafication.” Its cover story warned: “Cambodians wary as Chinese investment transforms their country.”

In recent years China has become Cambodia’s most important international partner. In return for geopolitical support—such as Cambodia’s advocacy in ASEAN for China’s position on the South China Sea dispute—China has provided significant amounts of aid and investment for Cambodia. China has also supplied much-needed support at times when the Cambodian government faced US and European sanctions for various human rights violations. Despite the withdrawal of US and European funding prompted by the Cambodian government’s repression of the CNRP, China provided US$20 million worth of support for the 2018 election, “including polling booths, laptops and computers.”

In this sense, the intensity of the negative coverage of Cambodia’s 2018 General Election in US- and European-aligned media outlets—and the pushback from Chinese-aligned media outlets like the Global Times—shows that the battle in civil society and the media over the election is actually a spiral repetition of an older global conflict. Just as various countries in the developing world—including Cambodia—served as locations for proxy wars between the US and the Soviet Union and their respective allies during the Cold War, Cambodia is once again functioning as the location for a new proxy war, this time with China leading the alternative to the US-led liberal world order.

Looking even further back, this new proxy war in Cambodia may be seen as one of the battlegrounds of the latest iteration of the deep spiral repetition of history which Graham Allison has identified as the Thucydides Trap—the pattern of conflict that periodically emerges throughout history between a hegemonic power and its rising challenger. Should the tension between the US and China eventually escalate into a hot war, Cambodia, with its close geopolitical and economic ties with China, could have a small but important role to play in how this conflict will be resolved. In view of this, the contest over the legitimation of the 2018 Cambodian General Election assumes deeper significance.

Alvin Cheng-Hin Lim is a research fellow with International Public Policy Pte. Ltd. (IPP) and is the author of Cambodia and the Politics of Aesthetics (Routledge 2013). A longer version of this article originally appeared on IPP Review and can be found here. Image credit: CC by President of Russia.

UK-China relations: the Hong Kong conundrum
Autopsy of a protest in Bangladesh