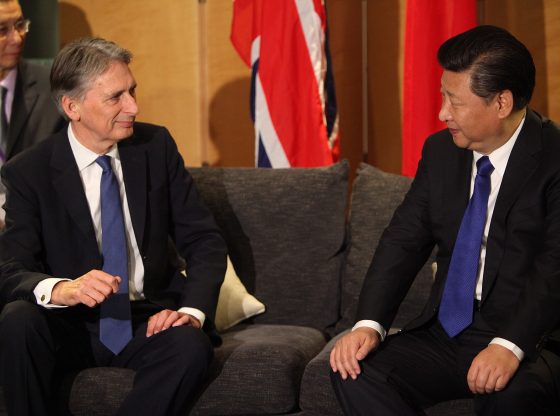 As international concern increases over the threat of ‘influence activities’ associated with the Chinese Communist Party’s United Front Work Department (UFWD) and its affiliated organisations, how will Britain respond? Congressional hearings in the United States have heard testimony on the UFWD and its activities while warnings about China’s influence operations have appeared in a number of other countries, including Germany, Canada and New Zealand. In Australia, revelations of political donations linked to the UFWD have led to heated public debate, the resignation of an opposition party senator and the passing of new laws aimed at limiting foreign interference. But there has been surprisingly little public discussion of these issues in the UK, despite the fact that the country faces similar challenges from United Front activities and has been actively seeking to deepen and broaden its relationship with China in the lead-up to Brexit.

At its core, United Front work is about exploiting rifts among adversaries to break up threatening alliances and extend the CCP’s network of supporters.

United Front work involves building links between the CCP and various social groups and influential individuals both inside and outside China. It ranges from relatively open and benign efforts at public diplomacy and cultural exchange to illicit activities such as espionage and kidnapping. Much of it lies in the grey area between these two extremes, where a mix of persuasion, incentives and coercion are used in order to control public discussion of China so that support for the Party and its policies are amplified and dissent or criticism is silenced. As documented by Anne-Marie Brady in her important 2017 report that examined United Front work in New Zealand, the UFWD and its affiliated CCP and state organisations engage in four main areas of influence activities: managing overseas Chinese communities, co-opting foreign individuals to advance the CCP’s agenda, a global communication campaign and the establishment of a geopolitical bloc centred on China.

There are a number of indications that organisations involved in United Front work are currently active in the UK. The CCP’s International Department has used the UK China Leadership Forum to engage with prominent political figures such as Lord Mandelson, Cabinet Office Minister David Lidington and Chairman of the China-Britain Business Council, Lord Sassoon. The Chinese People’s Association for Friendship with Foreign Countries (CPAFFC) has worked to promote regional links, including a UK-China Regional Leaders Summit. Nicola Sturgeon has traveled to China and met with CPAFFC leaders in 2015 and 2018. The organisation’s president Li Xiaolin has made official trips to Sheffield in 2016 and Scotland in 2017.

In February 2017 the Times reported that Labour MP and former shadow energy secretary Barry Gardiner had received more than £180,000 in staffing costs from a law firm with links to a number of United Front organisations. While the newspaper noted that there had been no suggestion of impropriety it also quoted sources who were troubled by the perceptions of influence that such links might generate.

The Chinese Students and Scholars Association, which is used by the CCP to monitor, control and at times mobilise overseas students, is present on campuses around the country, while the UK’s Chinese language news media have felt the effects of the CCP’s efforts to promote the international syndication of Chinese state news content through a combination of incentives and coercion.

Not all so-called influence activities are inherently problematic and it is important to distinguish the CCP’s use of threats or material incentives to shut down criticism and stifle free speech from normal public diplomacy or the legitimate attempts by Britain’s ethnic Chinese community to seek greater representation both in politics and the media.

But United Front methods that involve the use of coercion or manipulation to shut down undesirable views and shape public discussion of China in this country should be a serious concern. What is needed now is an open and robust discussion of how British institutions, organisations and individuals engaged in political, economic and social interaction with China should manage the risk of being coerced or manipulated into acting in ways that run counter to their values. There are some signs this discussion is beginning—the Conservative Party’s Human Rights Commission held an inquiry in early 2018 into the Confucius Institute and its impact on academic freedom and freedom of expression—but a broader debate is needed. Politicians, businesses, universities and other social organisations need to understand how the United Front operates if they are to develop appropriate strategies that can foster positive engagement while upholding their core principles.

We should also recognise that Brexit represents a significant strategic opportunity for the CCP to advance its United Front work in a major Western nation. At its core, United Front work is about exploiting rifts among adversaries to break up threatening alliances and extend the CCP’s network of supporters. If the Party’s United Front work is successful then closer UK-China relations will lead to the UK slowly drifting away from its commitment to support a ‘rules-based international order’ and the liberal democratic values it claims to share with the EU.

The UK government needs to find a way to cooperate with its counterparts in the EU, as well as in other liberal democracies such as Australia and the United States if it is to successfully craft a unified and principled response to the challenges posed by the CCP’s United Front. This will require looking beyond just the national security implications of dealing with China, although national security will at times be relevant in certain sectors. Britain, along with the rest of the liberal democratic world, needs to tackle the more fundamental—and more vexing—question of what principled engagement with an authoritarian yet globalized great power should look like in the 21st century.

Autopsy of a protest in Bangladesh
Mainstreaming youth in development planning in Pakistan: realistic or not?