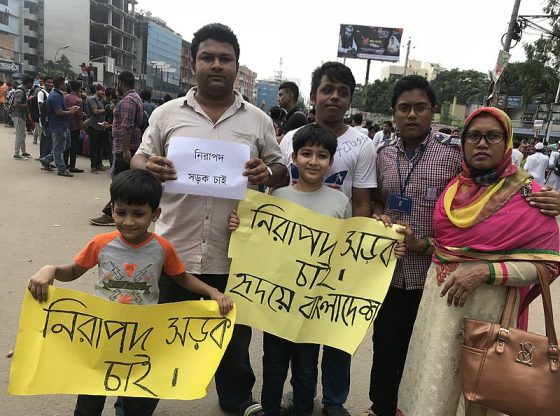 The author requested to remain anonymous.

Warning: linked images and videos may include distressing content

Scrolling through social media on 28 July 2018, I came across amateur footage of an influx of agitated students from Shaheed Ramiz Uddin Cantonment School & College into the airport road of capital Dhaka just hours after two of their cohort were killed and several others injured by a speeding bus, long before the incident could be broadcast by the country’s news channels.

At the time, it seemed like only a temporary outburst of anger in response to the frequent road accidents in Bangladesh. A silent observer like myself, living in a different city, could only make an inference with no first-hand experience of the protest itself. It was difficult to imagine that this was just the beginning of a remarkable movement that would irrevocably affect the turn of history in Bangladesh.

The movement gained momentum the day after, when the protest was met with violence by Bangladesh Police, ensuing students from colleges across Dhaka and other cities such as Chittagong, Narayanganj, Tangail, Natore, Bogra, Rajshahi, Barisal, and Sylhet, to stage demonstrations for safe roads and for authorities to fulfil their nine-point demands. Several live videos of the police attacking students, including a video of a student getting run over by a truck while wanting to check for its license, became viral on social media, again long before these incidents could be broadcast by news channels who were prevented from covering the movement live. These videos, especially the uncensored live videos, helped ripple the movement across Bangladesh, showing how effective social media can be in stimulating collective action.

Over the next few days, my compatriots and I were daily witnesses to history. I came across videos and pictures of these young students, unaffiliated with any political agenda, ensuring all vehicles follow the law by painstakingly stopping each and every vehicle to check for their licenses. Most public buses in Dhaka are driven by drivers without licenses and shielded by law enforcement agents. The students implemented remarkable change, stopping underage driving; catching a policeman driving a motorbike without any license; making the Minister of Commerce and Industries Tofail Ahmed follow route regulations by having his car turn back when his driver was driving on the wrong side of the road; making separate lanes for vehicles including an emergency lane for ambulances; escorting patients in ambulances unhindered through the crowd; and cleaning up the roads following their protests, setting an example of how peaceful civil disobedience can truly function.

Cultural groups came forward to support this movement in their own unique ways. A song titled “Ar koto?”  (“How much more?”), composed by local band Kureghor to fuel the movement, circulated on Facebook with captions full of optimism. Coming across this video, I was reminded of “Swadhin Bangla Betar Kendra” (“Independent Bengali Broadcast Centre”), the radio broadcasting centre of Bengali nationalist forces during the Liberation War in 1971. Just as the station played a vital role during the liberation struggle by strengthening the morale of Bengalis using songs and cultural programmes, these initiatives rallied support for the students. Teens also took individual initiatives to document the movement to raise awareness worldwide when the international media was yet to react. This reminded me of Ravi Shankar – an Indian musician – who, along with George Harrison, organised “The Concert for Bangladesh” in New York’s Madison Square Garden to raise international awareness about the genocide in Bangladesh in 1971. In fact, it was arguably more impressive given the lack of financial and big-name support the youngsters had.

The local media was prohibited by the government from covering anything significant. People had to turn to the footage filmed by people on the ground and shared on Facebook numerous times.

A key support group were adults, normally reticent in allowing the youth to get too involved in social change due to the dangers that may result. Parents allowed their children to participate in the movement despite knowing they would be suspended from school if found associated with the movement. Videos of several mothers feeding the students en masse also became viral on social media, a powerful image in a society where motherhood is often revered.

The Police along with the student wing of the ruling party Awami League – the Chhatra League – cracked down on protesters multiple times during the movement. The local media was prohibited by the government from covering anything significant. Thus, people had to turn to the footage filmed by people on the ground and shared on Facebook numerous times. A lot of these images were discredited as fake. It was impossible to differentiate between fake and authentic news when it came to verifying allegations of death and sexual assault. (Violence and assault have since been verified.) When people started expressing fears that worst things could happen in the near future, I felt as apprehensive as never before with the media in complete blackout and the internet speed being tampered with. Following the second attack that left up to 115 people injured, this trepidation grew.

As an observer whose participation in this movement was limited to Facebook posts, sharing videos and writing to international media outlets, I do not think it would be an exaggeration to say that the movement was “shared” with the rest of Bangladesh through social media. From being the only source of news to sharing emotionally uplifting videos and pictures, Facebook served a purpose. However, when authenticity with regards to rapes, murders and hostages cannot be verified, it provided ammunition to the deniers and opponents of the movement. The key thing to take away from this is how people risked their safety to provide news in the midst of extreme censorship. While details may be sketchy, we owe it to the movement to support its ethos and demands still.

At the author’s request, Asia Dialogue is publishing this contribution anonymously. The author, an activist and student, is at risk of backlash under Section 57 of the ICT Act, which has previously been used to censor reporters and students. Image credit: CC by Asivechowdhury/Wikimedia Commons.