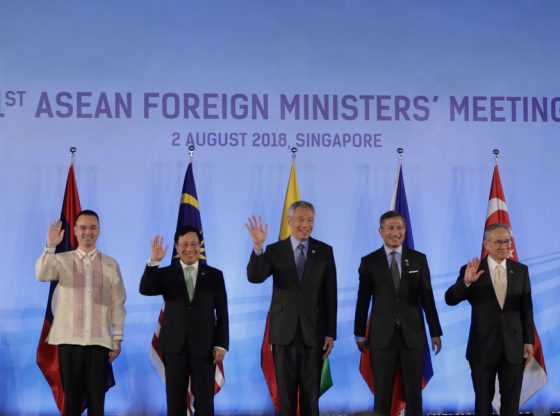 At the recently concluded 51st ASEAN Foreign Ministers’ Meeting in Singapore, the ‘Indo-Pacific’ concept featured as the key theme in discussions. According to a Joint Communique released, the regional grouping looks forward to ‘further discussion on the Indo-Pacific concept, which embraces key principles such as ASEAN Centrality, openness, transparency, inclusivity, and rules-based approach, while contributing to mutual trust, mutual respect and mutual benefit’.

At the ASEAN-US Ministerial Meeting held the next day, US Secretary of State Mike Pompeo announced a US$300 million pledge in funding for security co-operation for the Indo-Pacific region. This follows an earlier pledge of US$113 million of regional investment in technology, energy, tourism, and infrastructure, presumably part of a three-way partnership with Australia and Japan.

So with all this talk of ‘Indo-Pacific’, what exactly does the nebulous phrase ‘Free and Open Indo-Pacific’ mean and can the Indo-Pacific concept come to fruition?

What exactly is the Indo-Pacific?

Linking the Indian and the Pacific Oceans is not a new geostrategic concept. In fact, the idea of an Indo-Pacific region may be traced back more than a decade to 2007, when Japanese Prime Minister Shinzo Abe, addressing the Indian Parliament, spoke of ‘The Confluence of the Two Seas’. In 2012, he elaborated his Indo-Pacific views in an article, highlighting his concerns over China’s assertions in the South China Sea, as well as his vision of ‘a strategy whereby Australia, India, Japan, and the US state of Hawaii form a diamond to safeguard the maritime commons stretching from the Indian Ocean region to the Western Pacific.’

The idea of an Indo-Pacific region regained traction in November 2017 when the quadrilateral security dialogue – comprising the USA, Australia, Japan and India – reconvened around the theme of a ‘Free and Open Indo-Pacific’ region. According to then-U.S. National Security Adviser H.R. McMaster, the current US administration’s vision of the ‘Free and Open Indo-Pacific’ includes ‘freedom of navigation, the rule of law, freedom from coercion, respect for sovereignty, private enterprise, and open markets, and the freedom and independence of all nations.’ This was followed by the renaming of the US Pacific Command to the US Indo-Pacific Command in May 2018.

Nevertheless, the idea of an Indo-Pacific region currently exists more on paper than in reality, due to the lack of clarity in definition, scope, and structure, limiting it from moving beyond catchphrases and vague vision statements.

When it comes to practical implementation, it is unclear whether the four ‘Quad’ countries themselves have the same aspirations or designs for the Indo-Pacific. Australia was again excluded from the annual Malabar exercises in 2018. Even when it comes to non-military forms of co-operation in the Indo-Pacific, it looks like there is no consensus. Talks have been under way for months between Australian, US and Japanese officials on a joint scheme to counter China’s Belt and Road Initiative (BRI). Despite efforts to include India in the infrastructure scheme, New Delhi is not involved. India’s reluctance has been attributed to Indian Prime Minister Narendra Modi’s desire to seek better ties with China and a reluctance to provoke Beijing, especially after a military stand-off like Doklam last year. Moreover, India still faces its own development challenges.

Who should be included?

According to the joint statement of the Australia-US Ministerial Consultations 2018, the US and Australia seek deepening co-operation with ‘like-minded Indo-Pacific nations’. Like-mindedness could refer to other democracies around the region, suggesting that New Zealand, South Korea or even Taiwan may become potential partners or drivers of the Indo-Pacific concept.

South Korea is not involved in the Quad despite existing security co-operation with other Quad members. Engaging with North Korea remains a strategic priority for Seoul, and lingering historical issues have prevented South Korea becoming closer to Japan. South Korea also faces substantial pressure from China and the current Moon Jae-in administration has sought to improve bilateral ties following the THAAD crisis. Seoul is likely to respond cautiously about the Indo-Pacific concept that China is sceptical about. Furthermore, China would likely oppose Taiwan becoming actively involved in any Indo-Pacific security arrangements.

At the Shangri-La Dialogue in June this year, Modi presented a case for inclusivity and declared that the core of the Indo-Pacific region would be ASEAN, even as the Indian Ocean held the ‘key to India’s future’. US Defence Secretary James Mattis too took the Dialogue as an opportunity to unambiguously state US support for ASEAN centrality in the Indo-Pacific region.

It is unclear whether the four ‘Quad’ countries themselves have the same aspirations or designs for the Indo-Pacific…There is a need to clarify that Quad and Indo-Pacific are not synonymous, making the idea of Indo-Pacific more palatable to countries in the region.

Nevertheless, the reactions of ASEAN states to the idea of a ‘Free and Open Indo-Pacific’ have been cautious, varying from agnostic to silent scepticism. ASEAN fears that shifting the focus from Asia-Pacific to Indo-Pacific may diminish its role and centrality in the regional security architecture. ASEAN has had to walk a tightrope with Beijing and member states have often been at odds with each other over China. Therefore, ASEAN will remain cautious before endorsing Indo-Pacific, considering China is its largest trading partner and ASEAN states are recipients of China’s BRI investments.

From the perspective of inclusivity and geographical relevance, linking the Pacific and Indian Oceans suggests the involvement of South Asia, Africa, the Middle East, and the Pacific Islands. This means the Indo-Pacific concept could involve even more countries than the ASEAN-driven East Asia Summit (EAS) with 18 members, and the ASEAN Regional Forum (ARF) with 27 members. If an inclusive Indo-Pacific concept were to be institutionalised, a potentially huge grouping means it will face more structural limitations and a much slower decision-making process.

Realistically, then, the Indo-Pacific can only remain a loose and flexible concept, involving different groups of countries to address different politically insensitive concerns, such as humanitarian aid and disaster relief, and anti-piracy exercises. This would make it easier for other countries to gradually warm up to the concept.

ASEAN in the Driver’s Seat

Overall, the idea of Indo-Pacific is still in its early stages, and more discussion is needed to clarify its scope and vision before it could evolve into something concrete and realistic. There is also a need to clarify that Quad and Indo-Pacific are not synonymous, making the idea of Indo-Pacific more palatable to countries in the region.  This can only happen if Quad takes a backseat and ASEAN countries take charge of defining the Indo-Pacific concept. Furthermore, US commitment to the region is uncertain due to President Trump’s unpredictability, and the Indo-Pacific concept may benefit from a more stable leadership such as ASEAN.

To this end, Indonesian Foreign Minister Retno Marsudi presented Indonesia’s interpretation of Indo-Pacific cooperation to ASEAN member states at the recent ASEAN ministerial meetings. According to her, ‘Indonesia does not intend to introduce new regional architecture, but wants to optimize the existing structures’ and ‘ASEAN’s centrality principle is behind Indonesia’s promotion of the Indo-Pacific cooperation concept.’ The minister added that Indonesia believes the region’s architecture should be based on ASEAN mechanisms such as those implemented for the East Asia Summit (EAS).

So if countries want to invest in the Indo-Pacific region, it does not mean they are supporting the Quad or seeking membership. Once the concept is clarified, more countries might be willing to actively participate in defining and implementing co-operative mechanisms in the Indo-Pacific.