The BJP’s election machine powers towards 2019 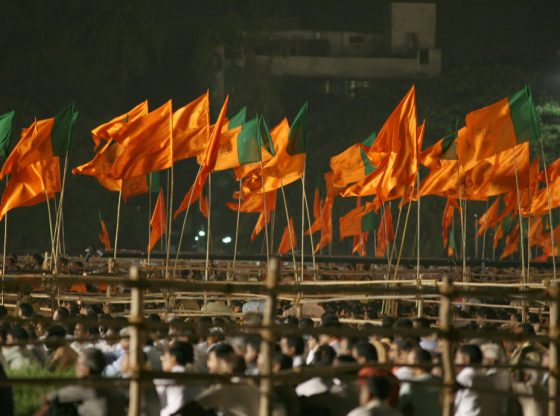 India is the world’s largest democracy. It scores well on international democracy ranking measures, voter turnout rates have risen, and the electorate has become savvier at using the political system. This political empowerment has resulted in the proliferation of parties at the centre and the state level. But since the election of the Bharatiya Janata Party’s Narendra Modi as head of a single-party government in 2014 (the first since 1984), many academics and activists have raised concerns about Hindu ‘majoritarianism’ and its challenge to democracy and the rule of law.

Local alliances of parties will pose a strong challenge to the BJP. But will these diverse alliances be able to agree to a coordinated front against the BJP?

After India’s independence in 1947, the Indian National Congress dominated the political sphere. In the late 1960s, it came under pressure from regional and regionalist political parties and in an attempt to increase its electoral chances after a damaging split, then-prime minister Indira Gandhi adopted a more populist narrative and centralised power.

She achieved short-term gains but further undermined the organisational strength of the Congress. This provided room for other parties, including the Bharatiya Janata Party (BJP), to mobilise. In the 1990s, the BJP — exploiting anti-Muslim sentiment surrounding the Babri Masjid issue — rose to state power. It controlled the national government between 1998 and 2004. It was then defeated in the 2004 election, having been unable to live up to its ‘India Shining’ rhetoric. Congress governed as the head of the United Progressive Alliance between 2004 and 2014.

The election of 2014 saw the BJP revived. Narendra Modi portrayed himself as a dynamic leader who could deliver economic prosperity for India’s aspirational young voters. The Hindu nationalist rhetoric was played down (at least by Modi) in favour of a development narrative. He put himself forward as a normal man, contrasting his humble origins with the ‘little princeling’ Rahul Gandhi, presumed to be prime minister-designate of the Congress though never officially named as such.

Modi played up the economic success he had achieved as Chief Minister of Gujarat and promised to replicate the model in the rest of India (despite other states having achieved greater economic development). Modi’s energetic campaign resonated with many, particularly first-time voters, and the BJP confounded all expectations by winning a single party majority in the Lok Sabha lower house of parliament.

Commentators at the time rightly suggested that the BJP was only able to win this overall majority as a result of its pre-election agreements as part of the National Democratic Alliance (NDA) (where alliance partners agree to stand aside in particular constituencies in return for parties returning the favour in others). Talk of the decline of coalition politics in India would therefore be premature. The BJP also benefitted from India’s first-past-the-post electoral system — it won over 50 per cent of the Lok Sabha seats with only 31 per cent of the votes.

Events since 2014 have raised the question of whether the BJP is the new dominant party of Indian politics. The BJP has been remarkably successful at the state level, winning elections in Maharashtra, Uttar Pradesh, Gujarat and even in the northeast of India. There are now few states not in the BJP’s hands. It managed to win the 2017 elections in Uttar Pradesh despite the chaos surrounding its demonetisation initiative five months before by spinning the initiative as an anti-corruption effort. And, although the BJP did not manage to win a majority in the recent state election in Karnataka, it did win the largest number of seats.

The BJP has secured these electoral successes for three reasons.

The first is that the discourse of Indian politics has changed. The National Election Survey revealed a huge rise from 35 per cent in 2009 to over 50 per cent in 2014 of those who agree that the will of the majority community should prevail in a democracy (‘community’ being understood in religious terms). Although institutions such as the Supreme Court have been a bulwark against some of the (de facto) anti-minority legislation, journalists have been forcibly silenced as Reporters Without Borders has shown.

Second, the BJP’s election machine is powerful. It micromanages the politicisation of caste and identity politics at a local level to deliver the majorities that it needs. Although there are parties that can challenge it at the local level, there is currently no national alternative that can do so.

Third, Modi has been a powerful figure — he is prominent in election campaigns even at the state level to the extent that chief ministers are often named only after the election result. The lack of viable alternatives to Modi is also a feature of the BJP’s success.

What does this herald for 2019? The Congress remains weak and is unlikely to be a plausible national alternative. Local alliances of parties will pose a strong challenge to the BJP. But will these diverse alliances be able to agree to a coordinated front against the BJP? This strategy worked in Bihar in 2015, but can it be replicated in a general election?

Although support for the BJP and Modi in particular appears to be slipping — and discontent over the lack of jobs is rising — the BJP’s election machine remains powerful (and has powerful financial backers). While a single-party majority may not be on the cards for Modi and the BJP in 2019, the party has successfully rewritten India’s political handbook. The lack of a viable alternative despite the failure to deliver on the economic front may well see the BJP and its NDA alliance return to power.

Katharine Adeney is a Professor and Director of the University of Nottingham Asia Research Institute and editor of Asia Dialogue. This article was first published on East Asia Forum and can be found here. Image credit: CC by Al Jazeera English/Flickr.

How Islamists are trying to exploit the 2018 Bangladesh protests
Local Governance in Nepal: An Overview