Sino-Indian Relations: Rapprochement in the Indo-Pacific? 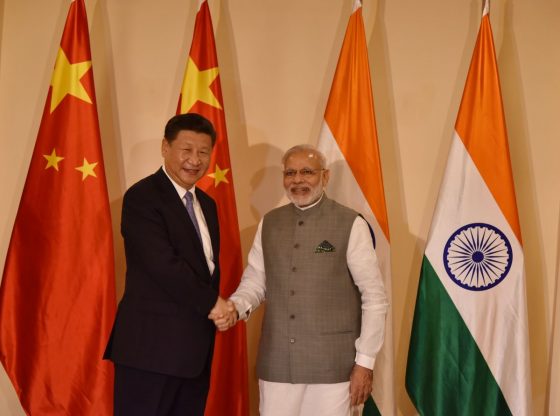 Sino-Indian relations provide a glimpse of the intricate interaction between geopolitics and economy. Paradoxically, China is India’s current top trading partner but also, along with Beijing’s once all-season ally Pakistan, its greatest perceived strategic threat. For its part, China doesn’t consider India a core threat even if it believes India’s recent policies (such as Look East and Act East) and increasing cooperation with the US and its regional allies are an attempt to contain China’s global rise. Importantly, Beijing and New Delhi view each other relative to their relations with Washington.

Since the Sino-Indian war of 1962, and despite occasional friction, China and India have managed to avoid major conflict and have progressively adopted similar stances on global issues such as free trade, anti-terrorism efforts, and climate change, while generally supporting the quest towards a multi-polar global order, often through international coordination bodies, such as the BRICS and the Shanghai Cooperation Organisation (SCO).

It is in India’s strategic and economic interests to assume a balancing role between the US and China.

Throughout the 2000s, China started to focus on the security of major sea lanes of communication (SLOC) stretching from the Arabian Sea to the Malacca Strait, one of the global maritime choke-points crucial to world trade and therefore to the Chinese economy. They did so by prompting infrastructural investments in countries that lie in or surround the Indian Ocean Region (IOR), enhancing the PLA’s naval power projection capabilities, bolstering alternative trade routes. This strategy sublimated into the dual (land and sea) Belt and Road Initiative (BRI), announced in 2013, and to which most South Asian countries traditionally in the Indian sphere of influence have adhered. Beijing has fostered its geo-economic (and military) reach in India’s strategic periphery, from Pakistan, Nepal, and Bhutan, to Bangladesh, Sri Lanka, and the Maldives.

New Delhi interprets this move as footprints to encircle India with military installations or de facto naval bases (such as the Gwadar port in Pakistan within the China-Pakistan economic corridor) whilst gaining economic influence in the region. After deepening defence (and nuclear) cooperation with the US, despite its longstanding military ties with Russia, New Delhi has begun reinforcing bilateral links in economic and military realms to countries of strategic relevance to China like Vietnam, the Philippines, Singapore, ASEAN as a whole, and external countries active in the Indo-Pacific like France. With Japan and Australia, it has also joined the US-led Quad military framework and dissuasive exercises such as Malabar. Finally, India has reached deals with local governments to build deep-sea facilities in strategic spots like the Seychelles and it is developing Iran’s oceanic port of Chabahar.

This has inflated a narrative against the BRI in terms of sovereignty (the so-called ‘debt trap’). Relatedly, President Trump’s neo-mercantilist strategy, consisting of an economic protectionist approach, a global ‘trade war’ first directed at China but also at longstanding allies as South Korea and the European Union and relatively new ones like India, has taken root. With its ‘free and open Indo-Pacific’ strategy with New Delhi at its core, and strongly opposed by Beijing, the policy is aimed at countering Chinese naval assertiveness and expanding deep-sea presence. India is described by the US National Security Strategy 2017 as a ‘leading global power and major defence partner of the United States’, and yet was harshly criticised by Washington over its trade policies, hit by Trump’s tariffs, and thus reluctantly imposed its own tariffs on US products. In fact, Prime Minister Modi’s plan to make India a manufacturing superpower (‘Make in India’) depends on the openness of global markets and the inflow of capital, while balancing against China is the real foundation of the India-US strategic partnership.

Therefore, it is in India’s strategic and economic interests to assume a balancing role between the US and China. Sino-Indian strife over border disputes – the Doklam/Donglang region in Bhutan – and China’s increasing presence in New Delhi’s strategic backyard – the Indian Ocean and South Asia – have been mounting. But so has Sino-Indian trade which reached 84,4 billion in the same year, a new historic high with a growth of almost 20 percent year-on-year.

Trump’s policies, Modi’s global diplomacy, and Xi’s willingness to counterbalance the US anti-Chinese offensive, in military and economic dimensions, are pushing the two most populous countries in the world to defuse tension and more closely coordinate their priorities.

During the last few months Chinese President Xi Jinping and Indian Prime Minister Narendra Modi have been described as in the midst of a rapprochement, signalled by high-level visits, and by accommodations by both sides. For example, China addressed Indian complaints about its trade deficit by lowering barriers on some Indian goods while Chinese imports from India rose by almost 40 percent in 2017, and has also pulled support for Pakistan regarding the Financial Action Task Force. Modi’s government cancelled a pro-Tibet conference by the Dalai Lama, criticised Trump’s withdrawal from the Iran nuclear deal (JCPOA) and the new sanctions concerning trading with Tehran, and sided with China against Washington’s steel tariffs at the WTO, in spite of its enduring opposition to the Chinese BRI. Furthermore, by mid-August, a dispute resolution was announced regarding ‘large segments’ of the Sino-Indian 3,488 km-long Line of Actual Control, after the second round of China-India Dialogue on Maritime Cooperation had taken place in Beijing. The inaugural India-US Strategic 2+2 Dialogue was postponed, while new bilateral Sino-Indian economic agreements are being negotiated.

In sum, despite a common interest in preserving global free trade and growing economic and financial bilateral interaction, the fundamentals of Sino-Indian relations are unlikely to undergo substantial transformations. The natural strategical rivalry, stemming from disputed borders and the gradual expansion of Chinese presence into an area traditionally under Indian influence, will remain, as will a mutual misperception. But the two border rivals do not pose a fundamental threat to each other given the geographic landscape, nor do they currently have the ability to dominate the Indian Ocean Region due to their actual naval military capabilities. Still, their growing power projection, hence the collision of their strategic theatres, are a source of friction. Nonetheless, Trump’s policies, Modi’s global diplomacy, and Xi’s willingness to counterbalance the US anti-Chinese offensive, in military and economic dimensions, are pushing the two most populous countries in the world to defuse tension and more closely coordinate their priorities.

Lorenzo Di Muro is a contributing editor at Limes – Italian Review of Geopolitics, and a contributor to Aspenia and La Voce d’Italia. His research focuses on global geopolitics, Sino–US relations and Latin America. Find him on Twitter @lorenzdimuro. Image Credit: CC/ Wikimedia Commons.

Local Governance in Nepal: An Overview
Central and Eastern Europe as a part of China’s Global South narrative