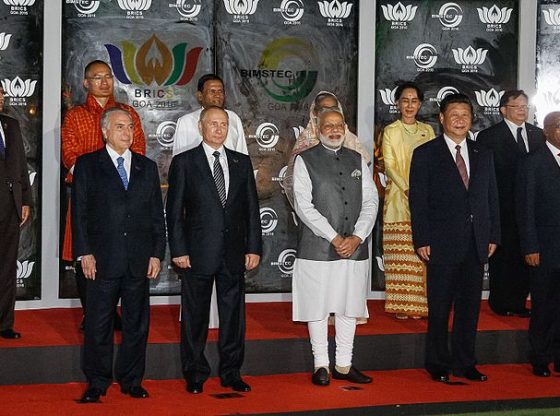 The 4th Bay of Bengal Initiative for Multi-Sectoral, Technical and Economic Cooperation (BIMSTEC) Summit is being held on August 30-31 in Kathmandu, Nepal. This summit comes at a time when global and regional politics is in flux. BIMSTEC as an organisation appears very promising. But many believe that BIMSTEC is yet to achieve its maximum level of potential.

The BIMSTEC has seven members – Bangladesh, Bhutan, India, Myanmar, Nepal, Sri Lanka and Thailand. The organisation was formed on 6 June 1997 with four members; Bangladesh, India, Sri Lanka and Thailand. It was known as BISTEC (Bangladesh India Myanmar Sri Lanka Thailand Economic Cooperation). Later in December 1997, Myanmar became a member of the organisation, with Bhutan and Nepal joining in 2004. BIMSTEC was formed with the intention of promoting economic and technical cooperation between members. But this has expanded to cover 14 areas, including areas in diverse sectors such as trade, tourism, agriculture, counter-terrorism, and climate change. However, the members are now considering revising the number of focus areas in order to function more efficiently.

India’s increased activism in the strategic sphere is in part driven by China’s strategic assertion in the Indian Ocean Region.

As an organisation, multilateralism remains the underlying theme for BIMSTEC. Yet, it is also important globally, regionally, and in terms of India’s foreign policy.

At the global level, BIMSTEC has the potential to be a formidable entity IF members invest in the growth of the organisation. Since the focus of the world is shifting to Asia in general, and South and Southeast Asia in particular, BIMSTEC could emerge as an important collective power in the region. The sharp polarisation in recent years threatens the existence and functioning of multilateral organizations. The rise in tensions between the United States (US) and China is affecting institutional mechanisms across the world. Regional and multilateral organisations are increasingly becoming instruments of major powers for modifying and replacing the existing order to suit their own interests. China’s strategic assertion and the US’ protectionist policies are two major factors that are creating a challenge for such institutions. Donald Trump’s stand towards the European Union (EU), the North Atlantic Treaty Organization (NATO) and the Group of 7 (G7) indicate the US’ leaning towards protectionism as well as an attempt to create a bi-polar order. Although there are signs of resolution of the US-EU dispute, there is still uncertainty as to what shape American policy will take. On the other hand, China with its Belt and Road Initiative (BRI) is attempting a uni-polar order.  China’s strategic ambitions have led to it rejecting the verdict on the South China Sea by the international tribunal in the Hague. BIMSTEC has an opportunity to establish itself as an organisation that would function without any power plays. But this will require significant trust building among the members and a convergence of interests.

Despite South Asia assuming economic and strategic importance, a multilateral organisation is yet to successfully function in the region. The South Asian Association for Regional Cooperation (SAARC) was founded in 1985 to promote economic cooperation and regional integration. But the disputes between India and Pakistan have dominated its agenda and economic and regional integration have remained issues of secondary importance. India’s stand-off with Pakistan on the issue of terrorism led India to boycott the 19th SAARC Summit in 2016, leadings to its subsequent cancellation. The 20th summit is scheduled to be held later this year. But India is most likely to skip the summit again because of Pakistan’s failure to take action against terrorism. BIMSTEC should benefit from absence of a major dispute among its members. The current BIMSTEC summit presents an alternative and opportunity to its members to revive efforts towards regional integration.

BIMSTEC is important from India’s point of view since it would allow India to forward its economic and strategic interests in the region as well as to promote a multi-polar order. BIMSTEC could play an important role in India’s Act East Policy. BIMSTEC could gain from India’s connectivity drive with Southeast Asia. Recently a land route was started between Moreh in India and Tamu in Myanmar. This route is a part of the India-Myanmar-Thailand Trilateral Highway. Other BIMSTEC members could also consider being a part of India’s Act East Policy.

India’s increased activism in the strategic sphere is in part driven by China’s strategic assertion in the Indian Ocean Region. But India has also been balancing its policies with respect to China. India’s balancing stand is that while protecting individual interests, polarisation should be avoided. India participates in several regional and multilateral organisations such as ASEAN, EAS, Shangri-La Dialogue, BRICS and more recently in the Shanghai Cooperation Organisation (SCO). India engages with China at bilateral as well as multilateral levels. But most of the multilateral forums reflect the polarisation witnessed at bilateral levels between member countries, i.e. US-China, US-Russia etc. BIMSTEC could be an opportunity for India to give shape to its proposition of multi-polar order. The absence of China and Pakistan is an opportunity for India to protect its own interests and also to create a deterrent order so that the interests of members are not compromised by China’s overbearing activities.

The 4th BIMSTEC Summit is starting with a lot of expectations. Despite being in existence for two decades, BIMSTEC still punches way below its weight. This summit should start pushing the organisation towards its maximum potential.

Niranjan Marjani is an Independent Researcher and Columnist based in Vadodara, India. He tweets @NiranjanMarjani. Image credit: CC Wikimedia Commons.