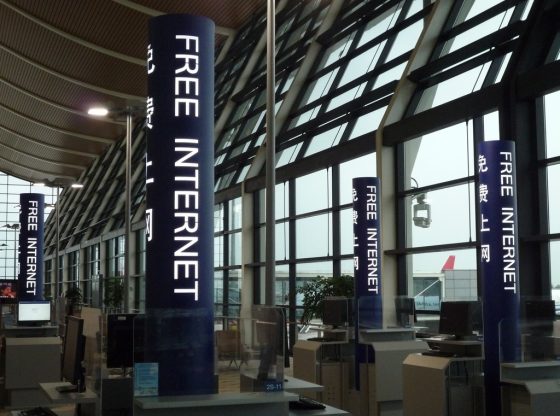 The year is 2024. You just got off a long flight from Heathrow to Hong Kong. It’s quite late—or is it early—at any rate, you remember that there’s an important email you were expecting, so you open your inbox (QQ, powered by Tencent) on the newest Huawei smartphone, which you chose in part since it was half the price of the iPhone 16. But for some reason, the connection isn’t working. That’s right, you remember that just last year, bowing to pressure from President Xi, Hong Kong began requiring a self-censorship pledge to sign on to public wi-fi as part of a rollback of free speech protections. There doesn’t seem to be any way around it, none of your VPNs are working, so you take the pledge, and your data is routed through Chinese servers.

The Chinese Belt and Road initiative is a primary avenue whereby the influence of Chinese telecom firms, and Chinese Internet policy, is already being spread throughout Eurasia.

This scenario may seem a bit troubling to some. But it’s already the norm for more than 750 million Chinese citizens, some of who use the Internet every day without ever touching a Western tech product, website, or accessing American software. For a generation, since the early days of the Internet back when grad students with fantastic beards such as John Postel were helping to create Internet governance structures like the Domain Name System (DNS) on the fly, we’ve gotten used to thinking of the Internet as a big tent – one that many of us have grown accustomed to accessing using Western, often American, hardware and software. But that’s changing. In lieu of a “global networked commons” in which core freedoms, such as freedom of speech, are protected around the world, which is how former Secretary of State Hillary Clinton viewed the Internet, we are heading into a vision of cyberspace that is much more Chinese, as Adam Segal argued in a recent Foreign Affairs piece.

The Chinese government has long pursued the goal of spreading its view that the state – not the private sector, civil society, or academia – should be the focal point for Internet governance. This is part and parcel of the multilateral ‘Internet sovereignty’ approach to cyberspace. It stands in contrast to the big tent multi-stakeholder‘Internet freedom’ approach, which is the foundation on which modern cyberspace was built.

This does not mean that we will all need to learn Mandarin to access the BBC, New York Times, or Facebook. English is still by far the most popular language on the Internet in terms of the top 10-million websites, and likely will be for some time to come. But it does mean that we in the West need to start asking the big questions about our vision for cyberspace in the twenty-first century and to do a better job at convincing emerging markets around the world as to the benefits of a multi-stakeholder approach to cyberspace that prizes innovation and openness.

Step one is filling the vacuum left by the U.S. government disengaging from global Internet forums. It has never been more important for other aligned cyber powers—including the UK, European Union, Australia, India, and Japan—to help lead the fight for a global, interoperable, and secure cyberspace. Step two is not letting any particular nation have an outsized role in standards-setting, such as with regards to 5G infrastructure. Step three is enlisting like-minded private sector and civil society organizations to help fight for an open cyberspace in the vein of the Cybersecurity Tech Accord, though Google’s recent moves to offer a censored search product in mainland China is a troubling sign of Beijing’s growing clout and underscores the difficulties involved.

For now, the Chinese Government seems content to quietly push its arguments on cyber sovereignty to receptive leaders, though there is some evidence that such lobbying is becoming more active in the face of a general U.S. retreat internationally. Moreover, growing concerns over ‘fake news’ online, and the popularity of the term among despots worldwide, are breathing new life into this more state-centric model. If more nations embrace it, ever so gradually the Internet freedoms many of us have come to appreciate—to access the sites you want online, to say what you think, use your preferred social networks, and socialize with who you want when you want—could be threatened. The Chinese Belt and Road initiative is a primary avenue whereby the influence of Chinese telecom firms, and Chinese Internet policy, is already being spread throughout Eurasia.

Cyberspace will continue to evolve. It’s as inevitable as the next billion people coming online. And that’s as it should be, the dynamism of this unique space has been integral to its growth and power over our personal and professional lives. Yet we can do more to ensure a vision of cyberspace in 2024 and beyond that is consistent with Western ideals while also being responsive to an increasingly multipolar world. To paraphrase Dr Martin Luther King, Jr., the moral arch of the universe is long, and it’s up to all of us to help ensure that it bends toward cyber peace.

Scott J. Shackelford is an associate professor at the Indiana University Kelley School of Business, where he teaches cybersecurity law and policy, sustainability, and international business law. He is a research fellow at the Harvard Kennedy School’s Belfer Program on Science and International Affairs, and director of the Ostrom Workshop Program on Cybersecurity and Internet Governance at Indiana University. He is also an affiliate scholar with Stanford’s Center for Internet and Society, a senior fellow at the Center for Applied Cybersecurity Research, and a term member at the Council on Foreign Relations. Image Credit: CC by Thomas Galvez/Flickr.

Modern country, persistent smallholder: Explaining the puzzle of Thailand’s truncated agrarian transition
From MDGs to SDGs: where next for Bangladesh?