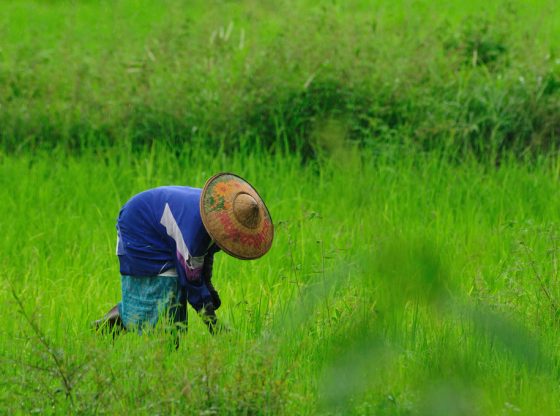 Why are there so many smallholder farming households in Thailand?

That might seem obvious: because Thailand is a kingdom of farmers and, more particularly, rice farmers. But it is a surprise when we view it against the wider story of Thailand’s social and economic transformation.

Over the course of the last half a century or so, economic crises notwithstanding, the Kingdom has made the transition from low income to upper-middle income status, absolute poverty has been eradicated, and compulsory education extended from four to six, to nine years. The country attracts billions of dollars in foreign investment and there has been deep structural change in the economy. Agriculture contributes less than 10% of GDP, and highways connect virtually every corner of the country. Thais are richer, better educated, and more mobile than ever before.

The ‘law’ of the farm-size transition has it that with changes such as these, smallholders should be modernised out of existence. People exit agriculture, leave the countryside to engage in non-farm work, permitting holdings to be amalgamated into larger and tacitly more efficient units of production. Agriculture is mechanised, and a modern farm sector emerges.

That, after all, was the experience in the global North.

Instead of farms getting larger and less numerous, the reverse is happening: they are getting smaller and more numerous.

This ‘stubborn’ persistence of the smallholder is not only a theoretical and historical surprise. It is also viewed as a policy challenge – a ‘problem’ to be addressed. For it is regarded as retarding agricultural modernisation, threatening Thailand’s vibrant farm commodity export sector, while preventing the narrowing of the country’s enduring rural-urban inequalities.

In 2013, 14% of rural households were counted as poor; in urban areas it was less than 8%. Median incomes in the countryside were one third of those in the Thailand’s cities and towns. Enrolment rates in tertiary education were 18% in rural areas in contrast to 40% in urban areas. And so on. In some quarters these spatial inequalities are seen to explain the country’s political impasse, with the ‘Red Shirts’ characterised as ‘the wretched of the Thai earth’.

Why haven’t Thailand’s smallholders been modernised out of existence? What does this say about the country’s experience of late capitalism? And what does it mean for rural livelihoods and, more academically, for how we think about such categories as rural and urban? Why haven’t Thai farmers – and for that matter, farmers across South, Southeast and East Asia (this is not peculiar to Thailand) – not sold up, moved out and also, implicitly, moved up?

In 2016 we interviewed an elderly farmer in Thailand’s Northeast – long the poorest part of the country – who was working a holding so small that it could not provide a reasonable livelihood. Mae Suk explained:

If I sold my rice land, where would we get our food from? At least if we farm rice we still have rice to eat. I see people here who have sold their farm land but none of them can get their farmland back. No matter how many rai we have now, it’s our parents’ land and I won’t sell it…

Another farmer, Mae Thong, echoed these sentiments when she told us:

We are rice farmers, and it’s the only job we can do now. I don’t know what else I could do! Just to have some rice [to eat], no matter whether it is profit-making or not, at least we still have our own food stock. If we turn it to money alone, it could all be spent, and there would be no food [rice] when we need it.

Mae Thong and Mae Suk were highlighting the security that land provides in the context of the precarity of much non-farm work.

It is worth noting that the share of the workforce defined as informal seems to have stopped declining. Between 1980 and 2000, the share of Thailand’s labour force defined as informal declined from 77% to 58%, as one would expect as the economy modernised. Since then it has levelled off. In 2013, 64% of the labour force was employed informally. This reflects not the resurgence of the informal sector but, rather, the informalisation of the formal economy. With jobs casualised, a thinly woven social safety net, and the real risk of redundancy in short order during an economic downturn, no wonder farmers keep tight hold of their land, a source of security in an uncertain world.

Not only has the formalisation of the Thai economy stalled, but so too has its industrialisation, at least when measured in terms of the share of the labour force in industry. In 1980, 8% of Thailand’s labour force was employed in the industrial sector; ten years later in 1990 it was 14% and in 1996, the year before the Thai economic crisis, the share had grown to 20%. Just like the gradual decline of the informal sector, this is what we expected to see. But, and again like the informal sector, this expected transition appears to have stalled. In 2017, the share of the labour force employed in industry stood only marginally higher than the figure in 1996, at 23%. This might be termed modernisation without industrialisation. Back in the villages, it is a case of deagrarianisation without depeasantisation.

Part of the problem with these data is the expectation that people make full and neat transitions from one way of living and working to another, and that households are spatially situated. In other words, that people stop being peasants or smallholder farmers and become workers, and at the same time migrate from rural areas to become ‘urban’. In fact, many keep a metaphorical – for much farming is now micro-mechanised – foot in the paddy field and another on the factory floor or construction site. This is especially true when we view livelihoods at a household level. Households pursue occupational multiplicity, and livelihood bricolage is normal. It also means that households stop being co-residential (spatially situated) and become multi-sited or trans-local with some household members residing – but perhaps not ‘living’ – in an urban location, while others remain in the natal village.

We need to see, then, the persistence of the smallholder in Thailand not in isolation – where it does not make much ‘sense’ – but as part of a livelihood strategy that crosses sectors and spaces, and where the risks and vulnerabilities of farming are set against the precariousness of non-farm work. Viewed in the round in this way, and maintaining a sub-livelihood plot of rice land, often farmed for own consumption rather than sale, is not as problematic or as out-of-place as it might, at first glance, seem. Indeed, it reflects and is produced by the very conditions that late capitalism bestows on households like those of Mae Suk and Mae Thong.

Jonathan Rigg is Director of the Asia Research Institute and Professor in the Department of Geography at the National University of Singapore. His latest book, More than rural: textures of Thailand’s agrarian transformation will be published by Hawaii University Press in early 2019. Image Credit: CC by Enea Pestelacci/Flickr