Gender equality, climate change and the myth of participation: The case of the Maldives

Home /Gender, Maldives/Gender equality, climate change and the myth of participation: The case of the Maldives 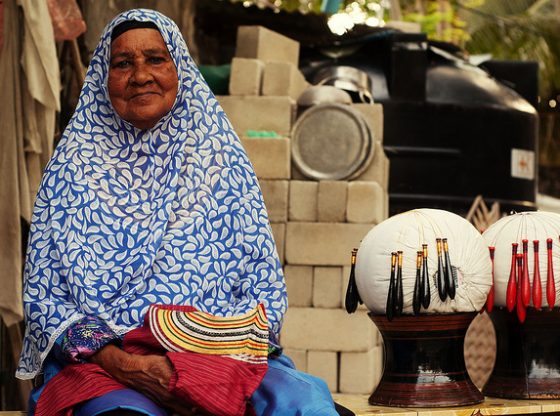 Gender issues have increased in importance among climate change policies in recent years. The celebratory tone at the COP 23 in Bonn, and the strides it has made in achieving gender equality through increasing female participation, may indeed sound like a step forward.

The above becomes even more pertinent when seen with regards to the case of Small Island Developing States (SIDS) like the Maldives. The gender action plan adopted in 2017 is considered the first of its kind in calling for gender mainstreaming. In particular, it is targeted at increasing participation of women from the Least Developed Countries (LDCs) and SIDS.

Most females are engaged in low paying jobs such as cooking, washing clothes or making thatched roofs for resorts, restricting their physical mobility within the confines of their homes. In other words, employment for women in the tourism industry limits their mobility to the confinement of households.

Yet, increasing participation of women belonging to LDCs and SIDS is not new and goes as far back as the late 90’s. It is built on the discourse of women being left out of the decision making processes and treated as a homogenous group facing increased vulnerability to climate change. Gender and development literature is rife with such examples. As local realities unfold, the myth of participation is brought to light, showing that even by increasing numbers of women engaging in certain fields, the issues surrounding power structures remain unchanged.

The Maldives, considered the most vulnerable among all SIDS, also has its hurdles to overcome when incorporating gender into climate change adaptation. To date, gender has not been prioritised, and has been mentioned only twice in the whole National Adaptation Program of Action document (2006) with both the NAPA and MINDC.

This should, however, not come as a surprise, due to two notable reasons. First, the discourse surrounding climate vulnerability in the Maldives is dominated by the alarming concern of rising sea levels and the need for significant investments in coastal defense systems in order to tackle it. Such discourses are rooted in the assumption that vulnerabilities arise due to the biophysical impacts of climate change alone.

Secondly, gender issues have become homogenized in relation to climate change, and are dominated by vulnerabilities stemming from poverty, or are concerned with the concept of women having to walk miles to fetch water. They do not resound with the lived realities of the Maldivian women. What is left out of this conversation is the ways the impacts of climate change will translate at the local level.

This brings into question the formulae of increased participation, relentlessly pushed with the hope that more women will become the harbingers of progressive change in their respective countries. In many respects this might hold true, but it would be a naïve and simplistic assumption to make considering the local reality in the Maldives.

Despite improvements presented in the Human Development Index, gender issues persist in the Maldives. Although female labour (now at 57.3%) has improved over the years, the gap is still substantial when compared to the male labour force (currently 78.8%). The picture becomes bleaker when considering political offices; only five out of the 85 parliamentarians in the Maldives Parliament are women. Only recently, in 2018, has the first female secretary general been appointed, and the 2008 ban on women holding presidential office removed.

Furthermore, most jobs in the Maldives are centered in the capital city of Male where it becomes indispensable for both men and women to work to fund the soaring costs of living. Women are often the ones picking up the odd jobs with lower paychecks. Job opportunities and choices for women are severely limited with the restriction imposed by discouraging familial division of labour and religious norms. According to the Maldivian Population and Housing census 2014, domestic chores were identified as one of the primary reasons for the high unemployment rate among women. This speaks volumes about the gendered division of labour and the unwillingness to transform the status quo.

Research conducted in 2016 reveals a reduction in the occupational mobility of women in the Maldives compared to the past, despite such booms in Maldives as the guest house tourism industry. Most females are engaged in low paying jobs such as cooking, washing clothes or making thatched roofs for resorts, restricting their physical mobility within the confines of their homes. In other words, employment for women in the tourism industry limits their mobility to the confinement of households.

These examples show that there is a danger of repeating the formulae of participation that are at the centre of many gender mainstreaming efforts in climate change adaptation programmes, including those in the Maldives. An example of this is a tourism adaptation programme supported by UNDP that mostly had conservation and mitigation efforts involving women. According to one of the representatives closely working with the plan, the barometer of female participation and empowerment was determined by reporting their attendance in meetings and activities.

The concept that gender equality and empowerment can be achieved through numbers must be revisited. At the heart of the discussion on gender equality there should be a focus on understanding who has the power to participate? What creates differences in vulnerability, meaning that some are less able to deal with the impacts of climate change?

Without such understandings, generic formulas for achieving gender equality, devoid of contextual realities, will continue to resurface.

China and Cyber Sovereignty
China and the Internet: Great Firewall or Panopticon?