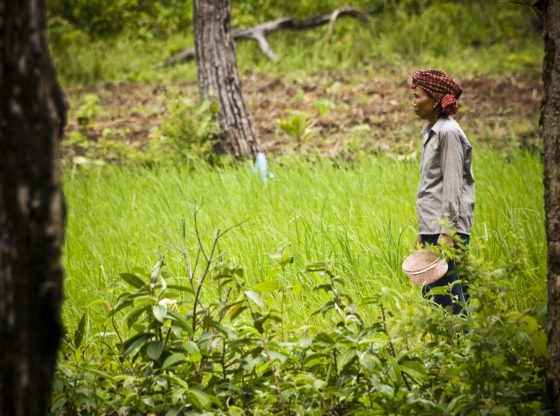 Cambodia’s growing population (14.7 million in 2013) is steadily becoming more urbanized, standing at 19.5% in 2008 to 21.4% in 2013, whilst still remaining overwhelmingly rural. Despite this, between 2010 and 2015, its economy grew rapidly, outstripping neighbouring countries, with an annual GDP growth averaging more than 7%. Such growth has contributed significantly to poverty reduction; the rate has been reduced from 53.2% in 2007 to 13.5% in 2014 (Figure 1). As a result, Cambodia has been re-classified as a lower-middle-income economy by the World Bank Group in 2015; its Gross Net Income (GNI) per capita was then $1,070. 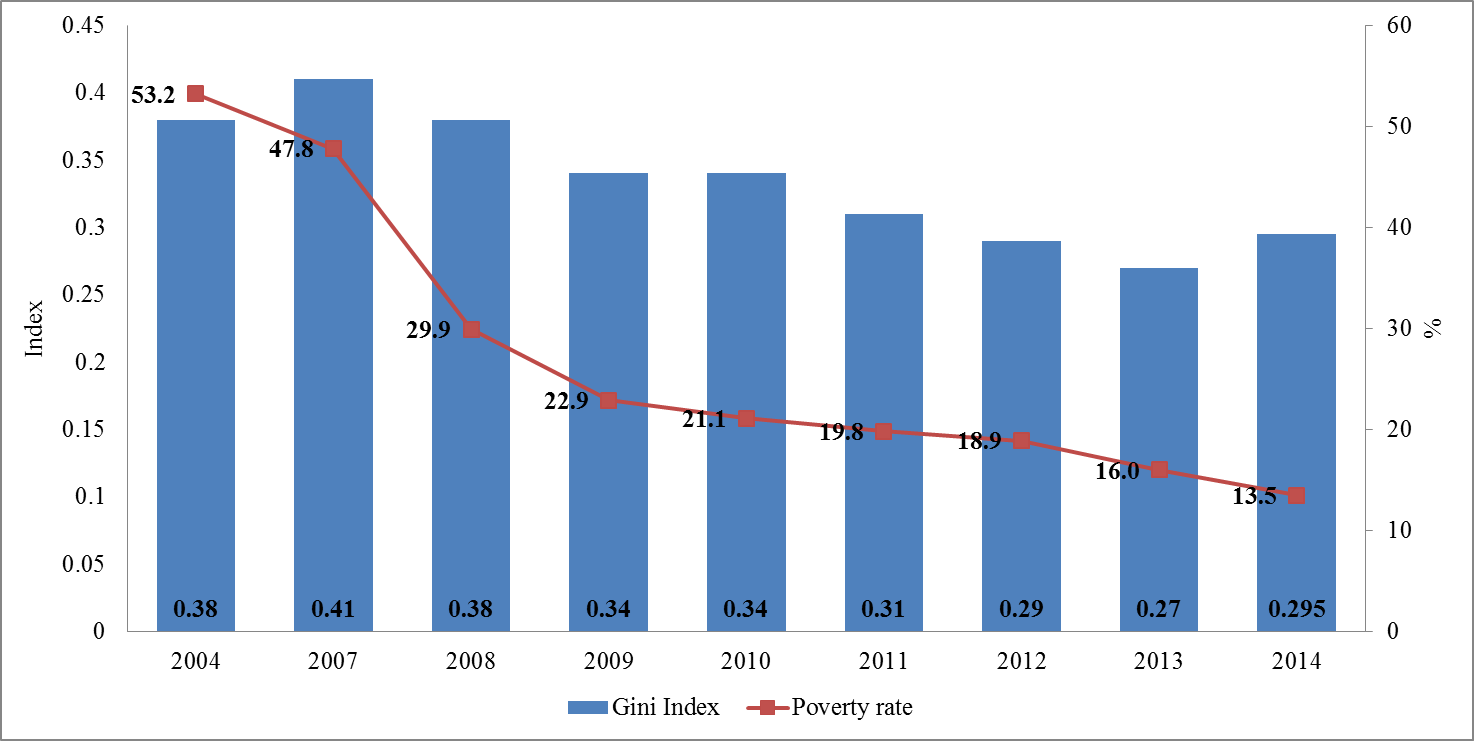 As levels of poverty reduce, so does, in theory, inequality. Yet, three quarters of the national population are still classified as poor or nearly poor, below or slightly above the poverty line. Between 2004 and 2007, inequality started to rise, but has steadily declined since 2007. A very great proportion of the population is concentrated toward the bottom of the income distribution, and the poverty rate is highly sensitive to where the line is drawn. According to the Cambodia Socio-Economic Survey (2016), disposable income per capita in Phnom Penh is twice as high as those in rural areas and higher than in other urban areas. Since 2006, the Ministry of Planning has established the IDPoor Programme, to regularly update and guide governmental agencies and NGOs through providing target services and assistance to the poorest and most vulnerable households (Table 1). 90% of Cambodians have been covered by the IDPoor Programme, having assisted 13 million people as of December 2017.

There’s a strong correlation between growth inequality and poverty reduction. Aghion et al. (1999) reveal why and how high inequality can affect growth; inequality can increase or decrease economic growth. In Cambodia, rapid economic growth witnessed between 2004 and 2007 was associated not only with the fall of the national poverty rate, but also with rising levels of inequality. In practice, economic growth does not always result in social development. The human development approach, developed by the economist Mahbub Ul Haq, is anchored in Amartya Sen’s work on human capabilities, often framed in terms of whether people are able to “be” and “do” desirable things in life. In 1990, the first Human Development Report was launched as an index to measure average achievement in certain key dimensions of human development in terms of life expectancy, education, and per capita income indicators.

Cambodia’s GDP has gradually increased from US$6.813 trillion in 1994 to US$41.968 trillion in 2008. In 2008, the GDP more than doubled to $ 89.754 trillion in 2017. From 2012 onward, foreign aid has decreased and instead been substituted with FDI.  Under the Generalised System of Preferences (GSPs), the EU is the largest destination for Cambodia’s exports, overtaking the US in 2012 and accounting for USD 4.1 billion (35%) in 2015. The US and Japan account for 30% of Cambodia’s exports, meaning that two thirds of Cambodia’s exports go to just three countries. Based on its strong record of economic growth, poverty reduction and Rectangular Strategy implementation, Cambodia has now surpassed the Human Assets Index threshold for LDC graduation and is fast entering the Economic Vulnerability Index lower bound. Furthermore, Cambodia now ranks fifth amongst all countries in achieving the Millennium Development Goals (MDGs) including halving the poverty rate (CMDG 1). Finally, Cambodia has also committed to accomplishing the Sustainable Development Goals (SDG) between 2015 and 2030; two of the 17 goals are already taken cared of; “No poverty” and “Zero hunger” for all Cambodian people.

In the short-run, Cambodia must reduce growth at the expense of natural resources and allocate those resources for the rural poor households. In the medium-term, Cambodia must re-invest into natural capital such as reforestation to maintain the ecological balance so that the natural environment canbe restored. Meanwhile, more public investment on education, health and social welfare will help to reduce poverty in a sustainable manner. It should be re-stated that Cambodians are still heavily relying on the natural environment to sustain their livelihood, from fisheries to non-timber forest products. Any environmental degradation would spell disaster for the poor.

Growth with Equity: The Case of Vietnam
Pakistan elections; one step forward two steps back?