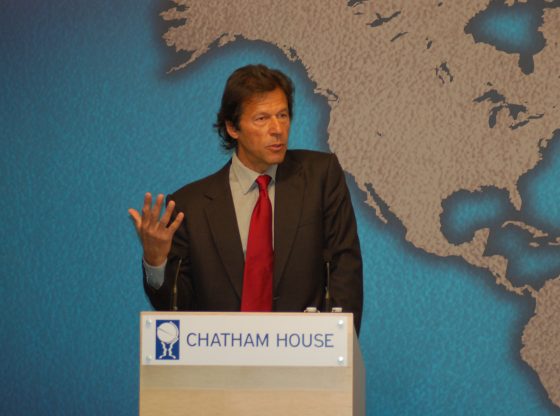 Pakistan’s third consecutive democratic transition was marred by charges of rigging and manipulation; a recurring familiarity in the 71 years old political history of the country. Competing parties have frequently alleged foul play by incumbent governments in previous general elections. As recently as the 2013 elections, Pakistan Tehreek-e-Insaf (PTI) itself challenged the results based on the role of the returning officers and unfair handling at the polls. However, two things stand out about the 2018 elections. One, the dubiety of these elections goes beyond the technicalities of polling day manipulation. Two, while the foreign press, a handful of domestic journalists, human rights organizations, and numerous international organizations have sounded the alarm, the mood of the general public within Pakistan remains optimistic. These elections may not be the epitome of democratic rights, but they can also not be dismissed as a sham.

A nationalist-conservative narrative not very different from that in India is already unfolding in Pakistan.

The European Union Election Observation Mission (EU-EOM) called the results “credible” in its preliminary statement. In the same statement, it concluded that despite legal provisions in place to ensure “a level playing field, there was a lack of equality and opportunity” provided to the contesting parties. The Free and Fair Election Network (FAFEN) also recently revealed that 1.67 million votes were excluded countrywide, including constituencies where the number was more than the victory margin. We can expect similar observations to follow in the next few months as more detailed reports come out, but it is unlikely that this will have any significant effect on PTI’s triumphant account.

The reality of the rigging behind the 2018 election is not in the polls, but in the narrative constructed to portray major political parties as corrupt, inefficient and degenerate. In contrast, PTI has a clean slate and an anti-corruption agenda. Corruption cases against politicians are not new in the country’s political history, yet the current legal action against former Prime Minister Nawaz Sharif is portrayed as revolutionary and “new.” Imran Khan is portrayed as the savior of the righteous middle class and the youth whose political memory only goes as back as 2008.

Several strategies were used to create an uneven playing field by allowing PTI to campaign freely while other parties suffered intimidation. Media outlets covering the Pakistan Muslim League Nawaz’s (PML-N) campaigns were threatened and journalists were intimidated. For example, GEO news channel was taken off the air and the distribution of DAWN newspaper was disrupted. Some mainstream newspapers even reported the EU EOM post-election statements with headlines such as “EU poll observers satisfied with poll conduct” completely ignoring the concerns. In some cases, political candidates were outright threatened (for example PML-N candidate Rana Iqbal Siraj from Southern Punjab Multan claimed that he was tortured by intelligence agencies and his fertilizer store was also raided). Meanwhile, the role of legal institutions in legitimizing such action continues to be questioned. A blatant example is the conviction of Hanif Abbasi, a prominent PML-N candidate at a time when it was not possible for PLM-N to find a replacement close to the elections. Other cases of candidates being held for contempt of court and statements against the judiciary were also reported.

Despite the shadow that lurks over the 2018 elections, perhaps there are some gains to be made for democracy. Pakistan is still in a democratic transition, and one thing that is certain about transitions is that rulebooks are not followed. PTI’s campaign has created a sense of political ownership. The premise of participatory democracy is civic action and political activism – on all sides of the political spectrum – which is considerably high. There is hope for increased accountability as Imran Khan and his party may be held to higher standards than preceding governments. Within the parliament, the opposition parties have taken a responsible united stance. Even the choice of Imran Khan as its blue-eyed candidate may prove to be detrimental to Establishment interests as he is seen as more unpredictable than his predecessors. He has the legitimacy of the popular vote and perhaps an optimistic version of the future would have him stand united with other democratic parties if circumstances demand it.

Considering the country’s complicated history with democracy, carving out a Robin Hood image for Imran Khan has not been difficult. We have seen similar populist tactics in Trump’s campaign in the United States and Modi’s in India. A nationalist-conservative narrative not very different from that in India is already unfolding in Pakistan. The judiciary has also been given the ‘holier than thou status’ the military has always enjoyed. Any criticism of these institutions can have dire consequences. This is Pakistan’s biggest challenge. If political parties can continue their resistance against all the odds, the future for Pakistani democracy may not be bleak – not just yet.

Bimal Adhikari is an assistant professor of political science and international relations at Nazarbayev University, Kazakhstan. Laila Farooq is an independent researcher. She holds a PhD from the University of Missouri, USA. Image credit: CC by Chatham House/Flickr