The complex state of women’s suffrage in Pakistan 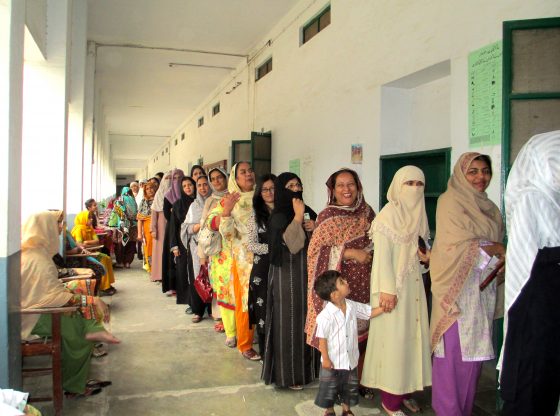 Women in Pakistan were granted voting rights in 1947 – later reaffirmed in 1956 – with provision of reserved seats in the Parliament. However, they face ignominy and objectification and are viewed as ineffectual. Despite this social stigma, the registration of female voters for the 2018 elections increased by 24 percent compared to the 2013 elections; in the latter over 95 percent of registered women did not even vote in at least 17 National Assembly constituencies. This showcases a clear change in the political atmosphere of the country.

Out of the 153 countries categorised on the basis of women’s inclusion, justice and security, Pakistan stood at number 150, with the highest level of bigotry against women coupled with the lowest financial inclusion.

Pakistan’s National Assembly has 60 seats reserved for women in addition to the 272 general seats for which direct elections are held. The reserved seats are distributed on the basis of party positions in the polls. Due to a provision in the Elections Act 2017 which demands that political parties allocate at least five percent tickets to women in the general seats of both the national and provincial assemblies, more women contested general seats in 2018 than in any election in the past. Last year, the ECP introduced a rule where 10 percent of women had to vote in a constituency for the vote to be valid. In the run up to the 2018 general election, the ECP also started a zealous registration drive.  As a result, an extra three million women voted. The impact of the Representation of the People Act (ROPA) amendment was evident: only 3 constituencies had a female turn-out below 10%, compared to 2013 where it was below 5% in 17 constituencies.  22 constituencies had a higher women turn out than male turnout.

On election day 2018, women turned out in force, pushing aside a solid period of patriarchy and taboo to make their voices heard at the ballot box. There was already some precedent for this. In October 2017, for the first time in 40 years, women turned out in significant numbers to vote in one of Pakistan’s districts – Upper Dir. This was required because the prior election, held earlier in 2017, was invalidated by the ECP because no women had participated.  In the 2018 General Elections, in Balochistan, Pakistan’s restive southwestern province, long queues of female voters lined up next to similarly snaking queues of men. Women in Dir, Kohistan, and North and South Waziristan made history when they cast their votes for the first time.In places such as Swabi, police and army officials ensured women were brought out of their homes to vote, despite a local ban on women voting. In other areas however they were not allowed to exercise their suffrage in many war-torn and rural areas.

Although a constitutional right, millions of women have been banned from voting through agreements among political parties, local elders, and powerful figures, citing customs and traditions as an excuse. Often, women’s lifestyles, especially in rural areas, are completely detached from politics. So even if they may not be prevented from voting by their male relatives, they are raised to not pay attention to elections. And then of course there are hardliners who state that female participation in elections is haram (forbidden). This makes it hard for women to leave their homes, especially those who are not from liberal or urban backgrounds. In villages such as Dhaular, Balwal, Mogla and Dhoke Dhall not a single woman voted in the 17 polling stations set up in these villages during the 2013 election.

According to a report by the Women, Peace and Security Index, Pakistan is the fourth worst country for women. Out of the 153 countries categorised on the basis of women’s inclusion, justice and security, Pakistan stood at number 150, with the highest level of bigotry against women coupled with the lowest financial inclusion. The National Commission on the Status of Women (NCSW) approximates that it will take 18 years to fix the present gap between men and women voters if 5,000 new CNICs are issued to women on a daily basis. An analysis of NADRA’s registration capacity however shows that it cannot achieve even that target since on average it can only issue 6,966 CNICs to men and women combined per day, suggesting that it may actually take close to 27 years to fix the gap between men and women voters.

So all in all, while a lot has been achieved in terms of women suffrage in Pakistan, especially the rural areas, there is still a long way to go. There has been a definite change in Pakistan’s political atmosphere but women need to be encouraged to fight on general seats. Those who enter the assembly on reserved seats have performed well but are still discredited by male colleagues because the women do not directly represent constituents. Parties have also been accused of partisanship when allocating reserved seats. The demand for more direct representation of women has grown due to these concerns. The Government needs to raise awareness among women, among their families, encourage them and ensure they are provided security. A day after claiming victory in a hard-fought election race, Imran Khan said that his policies will be geared towards minorities, women, all the oppressed.” Let us hope he stands by what he has promised.

Arhama Siddiqa is a Research Fellow at the Institute of Strategic Studies, Islamabad, Pakistan. She tweets at @arhama_siddiqa. Image Credit: CC by Flickr/DFID