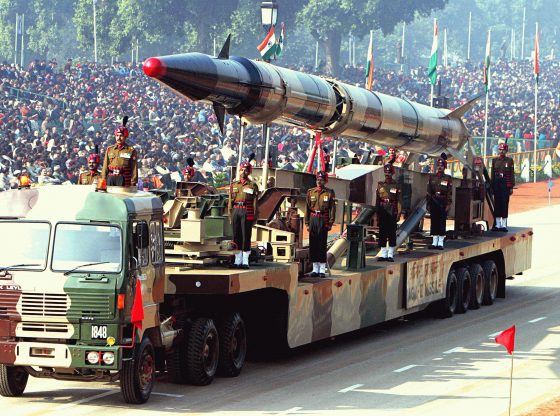 Historically, India followed a military doctrine defined as “a non-aggressive, non-provocative defence policy based on the philosophy of defensive defence.” According to Robert Ladwig, between 1981 and 2004 India followed the so-called “Sundarji doctrine.” Under this doctrine, “seven defensive holding corps of the Indian Army were deployed near the border region with Pakistan. The units consisted of infantry divisions for static defence, mobile mechanised divisions that could respond to enemy penetrations, and a small number of armoured units.” The aim of these holding corps was to halt the enemy advance. In case of a war with Pakistan, the three-strike corps were to attack “in the Rajasthan sector and penetrate deep into Pakistani territory to destroy the Pakistan Army’s two strike corps (known as Army Reserve North and Army Reserve South) through ‘deep sledgehammer blows’ in a high-intensity battle of attrition.”

The first-time limited war was discussed in Indian strategic circles was after the Kargil war in 1999. The Kargil conflict, which took place only one year after the overt nuclearization of the two countries in 1998, falsifies the assumption that with the introduction of nuclear weapons in South Asia war is no more an option between India and Pakistan. The conflict clearly indicated that despite nuclearization, both can still have armed conflict.

Although many Indian strategic thinkers would like to believe that they are aware of Pakistani redlines, the fact remains that they are not.

The then Indian defence minister, George Fernandes, was the first Indian leader to articulate the concept of limited war as an option. In January 2000, he stated:

“India’s success [in Kargil] was due to the ability of our defence forces to fight and win such a limited war at a time, ground and means of fighting chosen by the aggressor. If India can beat a professional military force equipped with modern firepower, at the ground (with Pakistani forces on dominating heights) and time of Pakistani choice with the initiatives also in their hands, then India can beat Pakistan anytime, anywhere.”

This view provided the Indian defence establishment a justification to keep a large conventional force, and also signalled to Islamabad that India can still use force against it if required to achieve its policy objectives.

The cold start doctrine of the Indian military: Too cold to start or a real concern?

The Indian strategic and defence community realised the flaws in the military doctrine the Indian army was following and concluded that it was no longer useful. Therefore, in April 2004 the Indian army created the idea of a “cold start” doctrine. The aim of this limited-war doctrine was to initiate a conventional strike against Pakistan that would cause significant harm to the Pakistan army before the international community could intervene to resolve the dispute.

Under the cold start doctrine, the Indian army will be divided into eight smaller division-sized “integrated battle groups” (IBGs). To provide highly mobile fire support, the IAF and naval aviation will be helping IBGs operations through close air support. The major element of the doctrine will be speed: rapid mobilisation of forces to achieve a quick victory before outside powers like the US and China could intervene on behalf of Pakistan. An Indian attack against Pakistan under this doctrine will use maximum firepower and will continue day and night until the military objectives are achieved. In the next war, the Indian army will not aim at cutting Pakistan into two as was the case in its previous military engagements with Pakistan. In fact, this time it will, according to Walter Ladwig, aim “to make shallow territorial gains, 50–80 kilometres deep that could be used in post-conflict negotiations to extract concessions from Islamabad.”

The advocates of this doctrine point out several advantages: because of the smaller size of the battle groups, speed and mobilisation will increase. At the same time, the duration and the cost of mobilisation and logistic requirements will decrease. It is also assumed that the cold start doctrine will keep the war well under the nuclear threshold of Pakistan; hence Pakistan will not have the justification to use nuclear weapons. According to proponents of the doctrine, Pakistan, when faced by eight thrusts into its territory instead of three, would be hard pressed for options as to where to concentrate its response and is likely to commit mistakes. This will also create problems for its intelligence organisations. In case as a desperate measure, Pakistan decides to use nuclear weapons against the invading forces, the marching Indian divisions will provide Pakistan with much smaller targets than corps.

India’s cold start doctrine is offensive in nature. Preemptive attack is one of the important elements of this policy. To counter any Indian preemptive attack, Pakistan may have to retaliate with nuclear weapons. The offensive posture and rapid deployment strategy leaves little time for intervening and mediating and increases the chances of the conventional war turning into a nuclear war. Its military badly harmed and some of its territory captured in the swift multi -pronged strike, it is assumed Pakistan would opt for first use but on its own territory to dislodge the enemy. Contemplation of such a possibility makes the doctrine dangerous for the stability of South Asia.

Can India be sure of the fact that it can undertake a limited conventional operation against Pakistan without crossing Pakistan’s nuclear redlines? Although many Indian strategic thinkers would like to believe that they are aware of Pakistani redlines, the fact remains that they are not.

The most important question that needs to be asked is what objectives will be set for any strikes under the “cold start doctrine” on Pakistan? And in which geographic area? As Pakistan lacks strategic depth, any strike is likely to threaten Pakistan and prompt it to respond in a way the Indian planners might not be able to contemplate. The cold start war doctrine is a risky proposition because the Indian army, which increasingly regards its political leadership to be spineless, could initiate such a situation to prove their point. One has already witnessed this tendency during the 2002 stand-off. Although New Delhi failed to operationalize this doctrine post Mumbai attack crisis, Islamabad considers this a real possibility and a serious threat and has revised its strategy and included tactical nuclear weapons to counter it.

In sum, the vast set of literature on deterrence informs us that its main purpose is to avoid a major war. If so is the case than nuclear deterrence can be taken as working between India and Pakistan. The first twenty years of nuclear South Asia is a testament to this fact.

In twenty years, Pakistan has made steady progress in the nuclear field. Apart from what has been highlighted above, Islamabad has also acquired ballistic and cruise missiles as well as developed tactical or low yield battlefield nuclear weapons. The recent test of Babur-III submarine launched cruise missiles is a testament to its second-strike capability.

The geostrategic trends in the Asia-Pacific in general and in South Asia in particular are changing. New Delhi getting closer to Washington, further solidification of Sino-Pakistan relations, Indian leadership’s confidence that they can engage Pakistan below its nuclear threshold, and Islamabad’s confidence that it can deter the Indian threat through its full spectrum deterrence capability makes the emerging scenario in the region uncertain and complicated to say the least.