Luo Dayou: A Cultural Icon and Inspiration in Taiwan, Hong Kong, and China 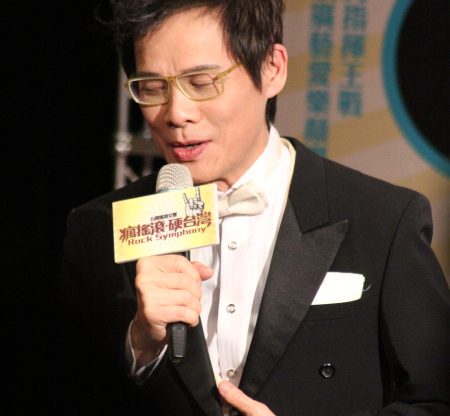 Whenever Taiwanese popular music of the 1980s, Taiwanese singer-songwriters or indeed the history of Mandopop in Taiwan in general is being discussed, one name that’s almost sure to come up is Luo Dayou (羅大佑). Often taking a critical look at society, his songs resonated with many from the 1980s to the 21st century. Though the political views he has expressed in recent years have upset some of his old fans in Taiwan, Luo Dayou remains very popular in China and is still viewed with nostalgia by many in Taiwan. His albums from the 1980s have been frequently cited by many later songwriters as a big source of inspiration. Not only are his songs still heard on the radio, his influence is also heard in the songs of many talented Taiwanese artists of today.

In late 1977, Luo got his first job as a songwriter, composing songs for the movie Golden Days (閃亮的日子) starring the popular singer Liu Wenzheng (劉文正) and actress/singer Zhang Aijia (張艾嘉), also known as Sylvia Chang. Luo also wrote other songs for Zhang Aijia, who eventually became his lover. The best known of his songs for her was “Childhood” (童年), a hugely popular track which appeared on Zhang’s 1981 album of the same name, and which Luo also produced. Almost as popular was another track from the same album, “The Story of Time” (光陰的故事).

Even before Zhang Aijia’s Childhood album had been released, Luo had essentially completed work on his own solo album, but he was having trouble finding a record company that would agree to release it. However, having had great success with Childhood, Rock Records finally agreed to take a chance on Luo’s music. Therefore, in 1982, the album Pedantry (之乎者也) was released. Musically, the album was a mix of styles like rock, folk and reggae, and lyrically many of the songs took a critical look at Taiwanese society. The lead track, “Little Town of Lugang” (鹿港小鎮), spoke for the many Taiwanese who had migrated to the big city of Taipei with its expressions of nostalgia for small town life and a sense of disillusionment with the modern urban environment. The ironic “Love Song 1980” (戀曲1980) was also a big hit. The title track employed language reminiscent of the Confucian classics in taking a sarcastic look at modern life, though it did not become as well known to the general public since it was banned from the radio. The album sold over a hundred thousand copies, a substantial amount for that time, and is rated by many as one of the most influential Taiwanese albums of all time.

Luo Dayou followed up his debut with 1983’s Masters of the Future (未來的主人翁). Both the title track and another key track, “Phenonmena 72” (現象七十二變), were more rock-influenced songs which took a critical look at Taiwanese society, the former looking at a damaged world through the eyes of the children who will inherit it, and the second featuring an irony-filled recitation of various features of contemporary Taiwan. Perhaps the best known track from the album, however, was “The Orphan of Asia” (亞細亞的孤兒). The song featured a dedication to Chinese refugees in Southeast Asia, but this was added to mislead the censors, as the song actually concerned Taiwan’s political isolation. Luo’s arrangement for the song was based on his folk rock-style acoustic guitar, but also included a children’s choir and most notably a suona, a traditional trumpet-like instrument. In this same period several of Luo’s compositions were hits for other artists, including “Is It True” (是否), sung by Su Rui (蘇芮), and “Springtime for the Wild Lily” (野白合也有春天) and “Maxims of Love” (愛的箴言), both performed by Pan Yueyun (潘越雲); “Maxims of Love” was also performed by Deng Lijun (鄧麗君; Teresa Teng).

Luo closed what many fans still regard as his classic period with 1984’s Home (家) and one of Taiwan’s first live albums, 1985’s Youth Dance (青春舞曲), which commemorated his successive New Year’s Eve concerts in 1983 and 1984. Though the more nostalgic and subdued Home album contained fan favorites such as the opening track “Impressions of My Hometown” (吾鄉印象), featuring Asian instruments such as guzheng, erhu and yueqin, the gentle title track and the banned “Super Citizens” (超級市民), did not sell as well as his previous two studio albums. Luo had also finally broken up with his long-time lover Zhang Aijia. Exhausted by the constant media attention, Luo used his live album to announce that he was taking a sabbatical from music. He went to the US, where most of his family had already immigrated, and eventually settled in Hong Kong. He had little involvement with music in this period, though he did write the music for “Tomorrow Will Be Better” (明天會更好), Taiwan’s answer to “Do They Know It’s Christmas” and “We Are the World”, as well as writing a few hits for individual artists, such as “A Flower on the Ocean” (海上花) for Zhenni (甄妮).

In 1988, Luo Dayou returned to the music scene with the album Comrade Lover (愛人同志). A departure from his earlier work, this album featured drum machines, more oblique lyrics and less social commentary. Though the changes displeased some of his fans, the album was a big success, selling over half a million copies and spawning hits such as the massively popular “Love Song 1990” (戀曲1990). Luo showed that he had not completely abandoned sociopolitical commentary with “The Song of the Dwarf” (侏儒之歌), a track on his 1989 Hong Kong re-release of the album attacking Chinese leader Deng Xiaoping for the massacre in Tiananmen Square.

In 1991, under his new Hong Kong-based music label Music Factory, he released a Cantonese album entitled Queen’s Road East (皇后大道東), featuring a variety of singers from Hong Kong performing his songs (Luo himself only sang on the title track and the album’s sole Mandarin song, “Pearl of the East” [東方之珠]). The album was a huge hit in Hong Kong. In Taiwan later that same year, he released Homeland (原鄉), his first album to mainly feature songs in Hoklo (also known as Taiwanese), though it also included several songs in Mandarin. The last of this trio of albums was the Cantonese album Capital (首都), featuring Hong Kong singers and a title track recorded in Beijing.

In 1994, Luo released what proved to be his last solo album for a lengthy period, Love Song 2000 (戀曲2000). The album featured ambitious production and arrangements on tracks but proved less popular with a public tuned to karaoke-friendly Mandopop. Though he wrote a few songs for other artists in this period, he basically stopped writing for the following few years, spending most of his time in Hong Kong and New York. He performed in a very successful series of concerts in China beginning in 2000, and in 2004 he released his first album in many years, Beautiful Island (美麗島), as well as performing his first concert in Taiwan in decades.

In 2009 and 2010 he collaborated with fellow Mandopop singer-songwriters Li Zongsheng (李宗盛; also known Jonathan Lee), Zhou Huajian (周華健; also known as Wakin Chau) and Zhang Zhenyue (張震嶽; also known as Chang Chen-yue and Ayal Komod) in a group called Superband (縱貫線), and in 2017 he released another new album, Home 3 (家III), the “3” a reference to the fact that he had included two songs called “Home” on his first Home album. Both his work with Superband and the latest album Home 3 gained critical acclaim with their win at the Golden Melody Awards. He has inspired many other musicians with the variety of musical styles and his political awareness. He will continue to encourage songwriters and musicians of the younger generation.

Eric Scheihagen (徐睿楷) is a pop music historian. He has collected a wide variety of Taiwanese popular music over the past two decades, including Mandarin, Hoklo, Hakka, and Aboriginal music. He currently hosts a radio show on Alian 96.3 Indigenous Radio. Image credit: CC by Sophia Chang /Flickr.