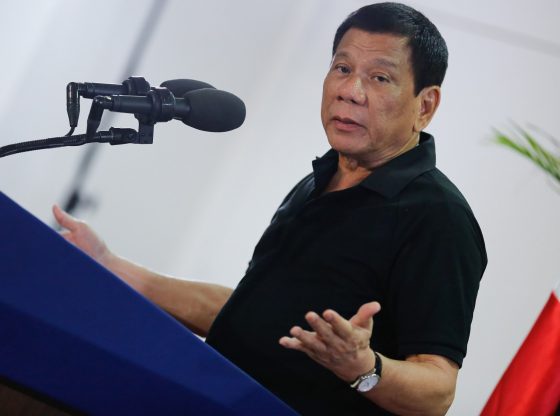 A country’s National Security Strategy (NSS) contains guidelines and action-plans to promote national interests and protect the nation from threats in a vulnerable and uncertain world. It outlines the right mix of ways and means—i.e. internal political consolidation, economic capacity-building, diplomacy, and/or military—in order for the state to survive and succeed at both domestic and strategic levels. When published as an unclassified document, the NSS serves various, at times ambiguous, purposes for a state actor’s performativity before diverse audiences at the two-level theatre of national security.

The perceived threats that directly impact the safety and welfare of the Filipino people are terrorism, insurgency, subversion, transnational crimes, illegal drugs, and graft and corruption.

On the home front, the NSS draws the people to the national leader’s strategic vision amid emerging and pressing security problems. It creates national consensus on security issues and concerns that the leadership desires to address with utmost priority. It lays down strategic lines of action for the executive branch and informs congress of the budgetary requirements for a whole-of-government approach to national security. As a management tool, the NSS provides national direction and coordination, institutional oversight, measures for effectiveness, and mechanisms for accountability in national security administration.

Outside the homeland, the NSS communicates to the world the unity and resiliency of the state and its people to counter threats against their safety and security, and carve a strategic position in the region. It projects power, pride, and even pretenses to influence others in the security community. It aims to deter aggression and defeat the enemy if needed. As a strategic communication, the NSS shows off the strengths and will of the nation-state under a strong leader, and shrouds any weakness and indecisiveness in challenging times.

To be able to perform all those purposes for different audiences, the arguments that under-gird the NSS must constitute a powerful political discourse. Since policy and strategy are about making choices under conditions of risks, uncertainty, and disagreement, the NSS must convincingly argue for or against particular preferences and possibilities that ground decisions and ways of acting. In this case, we can view and analyse the NSS as a form of argumentation and high-level political action, which the national leader uses to move selected security issues above normal politics and justify securitization with compelling reason.

In the Philippines, the first ever NSS to be released in the public domain was launched by the National Security Council in July 2018. The document contains the national ambition and strategic direction of the country under the bold leadership of President Rodrigo R Duterte. In analysing the discursive content of his NSS, we need to ask some key questions on the substantive elements of the policy arguments in the document. For instance, how did President Duterte, with his well-known rhetorical fierceness and revolutionary foreign policy, shape the security discourse in the country’s first NSS publication in 2018?  How were the focal subjects (i.e. referents that need to be protected against existential threats) predicated and positioned in relation to one another in the discursive practice in the NSS? What were the explicit or implicit presuppositions, which make possible the policy preferences and strategic direction pursued by President Duterte in his NSS? The answers can help us understand how the NSS articulates his policy decisions and actions on domestic and strategic challenges that impact national security. Through deconstruction, as a method of critiquing language and semantics, we can unravel some conceptual instability and strategic ambiguity in the substance and structure of the NSS argumentation.

Despite President Duterte’s staunch realism, the 2018 Philippine NSS—with its cover title of “Security and Development for Transformational Change and Well-Being of the Filipino People”—is surprisingly a model of idealism and constructivism. Even his political slogan of change is tempered with continuity and conservatism, when placed side by side with people’s well-being as the referent and receiving end of security and development. The overall subject of the security discourse, which we can see in the NSS title, reflects the nature and reservations of a small state that struggles from within.

The President’s Message in the NSS opened up with a thought that shapes the country’s security policy. As it was written in the Message: “In the past decades, the concept of national security has dramatically evolved from its traditional focus on territorial defence and governmental survival to the promotion of economic development and preservation of natural resources. Guided by this shift, (the Administration) crafted the National Security Strategy that articulates (the) road-map in building a stronger nation.” Note that the opening paragraph positions two sets of referents (i.e. territorial defence and government survival on the one hand, and economic development and preservation of national resources on the other) in a manner that privileges the latter over the former because of the terms “evolved” and “shift” as policy presupposition.  This was followed by an assertion to protect the country’s most cherished democratic institutions and way of life, which we can identify as another referent of security.

How the positioning of subjects in Duterte’s Message translate to a hierarchy of interests and to strategic priorities in the NSS is the issue at hand. Continuous reading of the texts will show that the given focal referents in the beginning are diffused in three hierarchical sets of national interests [i.e. nine core/survival interests, eight important interests, and four other interests], each of which contains a crowded list of comprehensive and complex national security goals.

While it aims to be all-inclusive, the very wide scope of national interests in the NSS begs more questions than gives direction. For example, how do the broad items listed under core/survival interests [i.e. freedom, safety, and welfare of people; internal security; national sovereignty and territorial integrity; independent foreign policy; sustainable economic development; law-enforcement and criminal justice; freedom from nuclear weapons; ecological balance; and national unity] differ from lower order interests at the second and third levels? What is the rationale for placing important interests [i.e. military modernisation, security sector reform, criminal justice reform, inclusive economic growth, welfare of overseas Filipino workers, homeland security, agrarian reform, and quality education and safe employment] at the second level and not as parts of the first? Would it also be possible to de-prioritise the other interests [i.e. adherence to international commitments on counter-terrorism, climate change, and non-proliferation of weapons of mass destruction] without impacting on core/survival interests of ensuring public safety, fighting terrorism, protecting the environment, and ensuring a nuclear free country?

The foregoing questions, along with other discursive issues, can reveal the inherent instability and contradiction of signifiers and their semantics. The characteristic attributes of what actually needs to be prioritised over peripheral concerns is ambiguous. Concepts and categories must thus be clarified in order for these to have weight and value in the strategic calculus of decision-making, especially on real matters of national security and survival.

Aside from the national interests that ideally guide the NSS, it is the existential threats that drive the strategic lines of action in the Philippine NSS. The perceived threats that directly impact the safety and welfare of the Filipino people are terrorism, insurgency, subversion, transnational crimes, illegal drugs, and graft and corruption. Given this presupposition, foremost in the strategic agenda in the NSS is to guarantee public safety and good governance—a course of action that includes a plan to modernise, professionalise, and synergise the military and police. Here, we can see that the core interest of public safety in the Philippines necessitates the use of the armed forces to address internal problems of government. The continuous preoccupation with constabulary and police functions of an internally oriented and developing military is a policy preference and strategic imperative in the Philippine NSS.

In the Chapter on Strategic Environment, the NSS explicitly noted “a sad fact that despite the lessons of the past, (the Philippine) armed forces remain one of the weakest in Asia, putting in doubt our ability to protect and defend (the country’s) national sovereignty and territorial integrity.” It also presupposed that the lack of national and sectoral-specific strategies limits the government’s ability to effectively address complex security challenges. Considering these premises, the synergy of the military and law enforcement is being built up as an instrument of national power in the NSS, along with political-legal, diplomatic, informational, intelligence, and economic and technological instruments.

This preliminary analysis of the discursive practice in the NSS leads us to reflect on the logic of its arguments through critical reading of the relations between text and meaning. Deconstruction draws our attention to conceptual nuances and incongruences, which reveal disorder in a discourse. The lack of clarity and consistency in policy is undesirable, unless the ambiguity is deliberate to confuse the enemy and/or create space for political manoeuvres. While strategic ambiguity could be beneficial in cases of hedging, deterrence, and negotiations, exposing one’s weakness and ambivalence may not be a good idea in a publicised NSS. Knowing for a fact that the fidelity and specifics of a real NSS are classified, there is no reason why it cannot construct a well-argued security theatre for public view. After all, this document is essentially for show.

Ananda Devi Domingo-Almase, DPA is a Professor III at the National Defense College of the Philippines (NDCP) and the Course Director for National Security Policy and Strategy in the Master in National Security Administration (MNSA) Program of NDCP. The views expressed in this article are hers alone and do not reflect the opinion and position of the College. Image Credit: Wikimedia Commons.

Luo Dayou: A Cultural Icon and Inspiration in Taiwan, Hong Kong, and China
A tale of two cities: Relocating U.S. embassies in Israel and Taiwan