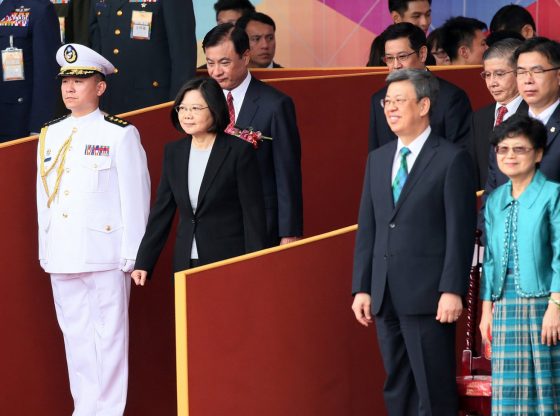 Tsai’s recent visit to the U.S. marked a warming of the U.S.-Taiwan relations since 2016. Though the U.S. was only the transit stop of Tsai’s formal visits to Republic of China (ROC)’s diplomatic allies in Latin America, Tsai had open speeches, tours, meetings in the U.S., which actually overshadowed the trip’s original purposes. The success of the visit ultimately forced Beijing to counter it anxiously by removing another ROC’s important diplomatic allay, Salvador.

Strengthened of the U.S.-Taiwan relations this time is supported by both the U.S. government and Congress. Trump accepted Tsai’s historic phone call in 2016 after he won the election. Taiwan Travel Act, National Defense Authorization Acts of 2018 and 2019 further requested for more exchanges of high ranking officials, port-calls of US Warships, joining military exercises, more arms transfers, and other important security cooperation, which can all be said as unprecedented since 2001.

Nevertheless, all of them have yet come true and can simply be done without these legislations. This “strong support” from the U.S. is largely lip service, nothing substantial. Trump administration finally notified the Congress of 1.42 billion arms sales to Taiwan on June 29, 2017. No further sales up to date. All major items Taiwan wants, including F-35s and M-1 tanks, are still waiting for the green light. Trump did approve the marketing licenses for the U.S. firms to join Taiwan’s indigenous submarine programme, but how could the U.S. sale something that it does not produce?

There is no progress in the Trade and Investment Framework Agreement (TIFA) between the U.S. and Taiwan either. Washington still emphasizes the “fairness” and “reciprocity” rather than providing generous terms to allure Taipei away from the Mainland’s course. Taiwan is even not listed on the targeted relief of the U.S. 25% tariff on steel and aluminium products that some other trade partners like South Korea and Australia already enjoy.

Sadly, there is actually more to be blamed on the Taiwanese side than on the U.S. side. American beef and pork, for instance, are still obstructed by Taiwan for unjustifiable reasons. There is no scientific evidence to prove that they are a hazard to human bodies. Arguably, the U.S. could fight for Taiwan in Cross-Strait military conflict under the Taiwan Relations Act, and yet the Taiwanese people do not allow the import of U.S. beef and pork!

Taiwanese commitment of retiring all nuclear power plants before 2025 is neither in the interest of both the Taiwanese and the U.S. people. Taiwanese will lose the cleanest and the most efficient power supply while the U.S. workers producing nuclear reactors and fuel for Taiwan will lose their jobs. At the same time, Taiwan is preparing to spend billions of dollars to develop the so-called “green energy” like wind turbines and solar photovoltaic panels, which are low-efficiency, high-pollution industries, and are largely in the benefit of European companies who provide no defence services to Taiwan for more than two decades.

Taiwan also failed to increase its defence spending and still wants to concentrate its limited resources on a small number of expensive weapon platforms that will be easily defeated by the People’s Liberation Army. One may argue that submarines are ideal for commerce raiding. However, given the interdependence of Cross-Strait economy and global supply chains, it is either unfeasible or unnecessary to consider such a strategy. Submarines are also highly lethal in the littoral water setting up ambushes, but for Taiwan, this mission can be done by sea mines and anti-ship missiles, which are much cheaper.

Even if there is a rationale to acquire submarines, Taiwan has to come out with a workable plan itself rather than just asking the U.S. for help. The U.S. has already suggested that Taiwan’s indigenous submarine building is not cost-efficient, and most of the sub-systems depend on European countries with little or no resistance to Beijing’s pressure. Procuring second-handed submarines from Japan through the U.S. in the name of scrap and updating them in Taiwan would be much more achievable and affordable. Taiwan’s existing boats also need overhauls and Taiwan is already capable of that. Other options can also be studied and tried. The bottom line is, Taiwan must do more and take the U.S. advises seriously.

Who should be responsible for the stagnation of U.S.-Taiwan relations? Tsai and her Democratic Progressive Party (DPP) regime. DPP sized its power at the expense of the people. In order to defeat the former President Ma, DPP demonized the U.S. livestock, and this, in turn, ruled out the chance to lift the ban after DPP itself was elected. DPP also subsidized the non-competitive green energy sectors which are heavily invested by DPP’s own sponsors. Worse of all, DPP promotes racism against those with cultural Chinese identity by pampering its supporters to use discriminatory and dirty words throughout the public discourse.

Taiwanese society is thus seriously damaged and deeply divided, making any major policy correction extremely difficult. Taiwan right now has a golden timing to improve U.S.-Taiwan relations, but the time is running out. Although Tsai’s recent visit to the U.S. is indeed a success of its own, it cannot resonate the overall Taiwan-U.S. relations.

Shih-Yueh Yang is a Professor at the Department of International Affairs and Business, Nanhua University, Taiwan. Image credit: CC by Office of the President, Republic of China (Taiwan)/Flickr