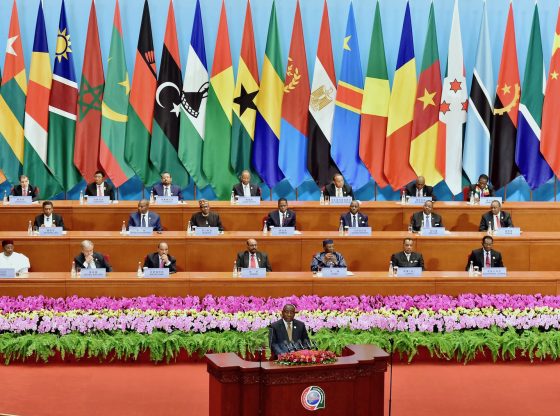 As the 7thForum on China-Africa Cooperation (FOCAC) took place in Beijing in early September, it became clear that China’s engagement with African countries has significantly broadened and deepened in scope. After President Xi Jinping pledged $60 billion for new projects in the continent, the economic and strategic interests that inform China-Africa relations have once again been at the centre of many commentaries. However, there is another important aspect of such relations that has surprisingly been given little attention, namely China’s official discourse. As much as material interests explain the PRC’s involvement in Africa, the discursive dimension is equally constitutive of the China-Africa story.

Despite China-Africa ties evolving and going through periods of disengagement as well as engagement, the discourse has not changed much internally: It consistently articulates China and Africa as long-term friends united in an anti-hegemonic struggle against the domination of the ‘West’. In constructing the discourse, Chinese leaders have mobilised a series of historical and political narratives that have contributed to socialise African actors into China’s worldview. For instance, China and Africa are described as friends, brothers, and partners. They are said to be both affected by, and need to take advantage of, globalization and economic cooperation. They also share a commitment to multilateralism and equal participation in international organisations, especially the UN. Both China and African countries are described as conducting foreign relations based on the 5 Principles of Peaceful Coexistence, in particular, respect for state sovereignty and non-interference in others’ internal affairs, and as believing in the centrality of the security-development nexus to achieving both development and peace.

Thanks to the stability and coherence of such discourse, coupled with economic investments, a sense of belonging to the same Global South community was created. China is thus recognised by African elites as a trustworthy friend, one that delivers on its promises and commitments and that acts in pursuit of win-win cooperation. It is such recognition that is allowing China to act as a norms-shaper in the continent: By presenting itself as a reliable partner and by being recognised as such across Africa, the Chinese model represents an attractive alternative to Western modes of engagement. Indeed, its involvement in Africa would not have been so successful if they had failed at portraying China as an ally and a friend. Similarly, should China fall short of the international community’s expectations, its credibility will be affected and with it, its normative power potential.

The FOCAC has proven essential to China’s normative efforts and to the promotion of its worldview. Indeed, as the Forum is increasingly being integrated into China’s broader foreign policy goals and the Belt and Road Initiative (BRI), these normative attempts are now being pursued globally and elements of Chinese official language can be found elsewhere too. It is not a coincidence that the 7thForum was exceptionally inaugurated by the Chairperson of the AUC Moussa Faki Mahamat and the UN Secretary-General António Guterres. Their presence confirmed China’s aspiration to connect the FOCAC and the BRI with both the AU Agenda 2063 and the UN 2030 Agenda for sustainable development. Their speeches also showed that notions that are typical of China’s Africa discourse, such as “win-win” and “a community with a shared future”, are becoming part of broader, global conversations.

The AU Chairperson Moussa Faki Mahamat joined 37 African countries in signing a memorandum of understanding with China expressing the intention to jointly develop the BRI and align it with the development strategies of African countries in light of a win-win approach. Similarly, in his speech at the opening ceremony, the UN Secretary-General António Guterres endorsed the FOCAC as an organisation that pursues fair globalisation and promotes development, and described the China-Africa partnership as one that contributes to “peace, security and to building a community of shared future for mankind”. This convergence is further reflected in the FOCAC action plan, which explicitly sets the aim to create a “strong synergy between the BRI and the 2030 Agenda for Sustainable Development of the United Nations, Agenda 2063 of the AU, as well as the development strategies of African countries.”

Therefore, China’s discourse is as important as economic incentives when it comes to its Africa policies and it is now the case that others outside of the country are starting to adopt Chinese-crafted phrases—a practice that has encountered criticism, especially from the US. Some have even argued that China’s influence at the UN was obtained through less legitimate means. Nonetheless, the (soft) power of its official discourse has played a fundamental role in cementing China-Africa relations and is now being promoted at the global level. It thus deserves attention and should be researched in the future in order to explore the extent to which China’s normative power is expanding and to monitor whether the UN and other international organisations will increasingly bear “Chinese characteristics”.

Ilaria Carrozza (@ilaria_carrozza)is a PhD candidate in International Relations at the LSE, working on Sino-African security relations and China’s foreign policy. She holds a BA from the University of Pisa and an MA from the School of Oriental and African Studies in London. She was the editor of Millennium: Journal of International Studies, Vol. 45, and she had previously worked as a consultant for the United Nations Economic and Social Commission for Asia and the Pacific (UNESCAP). Image Credit: CC by GovernmentZA/Flickr.