Golden Melody Awards and Festival: Musical Exchange Between Taiwan and the World 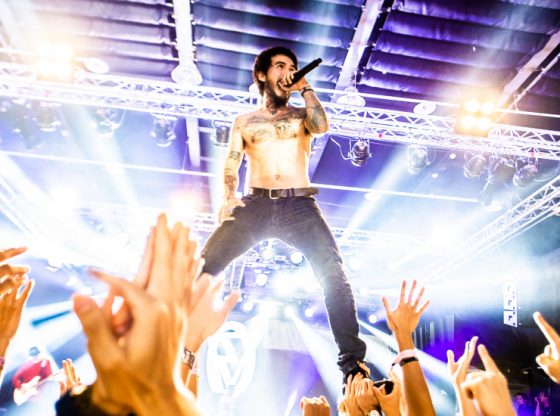 The night of 20th June 2018 was one of the most significant nights of my life when I finally managed to see No Party for Cao Dong  playing live at the showcase of Golden Melody Festival (金曲音樂節). Hailing from Taipei, they released their first album The Servile in 2016 to great acclaim. Ever since I became a researcher in popular music, I was fortunate enough to travel to many places, attend concerts and events, all in the name of research (not for my own pleasure).

Unfortunately for all my luck, and not for want of trying, I have never had the opportunity to see No Party for Cao Dong  play live. This may be because I have lived abroad for the past couple of years, but the most likely reason is the difficulty in trying to purchase tickets to their shows. After all, the band is known by their fans as ‘No Tickets for Cao Dong.’

What makes a showcase different from a concert is the audience and the goal. Often in a showcase, there will be a specific type of audience in attendance, this includes various delegates- international buyers, bookers, producers, and promoters – who may be attending in order to seek new business opportunities and contacts. As a researcher, of course, I took advantage of the opportunity to ask what the delegates thought of the show. While various promoters expressed their interest in make bookings with the band, the audience, who were predominantly young, sang along loudly in unison and swayed to the music. One delegate said that the atmosphere reminded him of chanting at football grounds. This was in reference to ecstatic moments in the show when band members ceased playing their instruments, leaving the audience to sing the chorus of their hit, Simon Says:

Go, run to school and make some friends, my boy

Look at the thing in your hand

Don’t you know it is already outdated? Huh.

While the rest of the performers of the night, including Sangpuy, DJ Didilong, and Kowen Ko staged a feast of music with a striking diversity of genres, Cao Dong did indeed leave a strong impression on all those in attendance of the showcase.

To understand where Golden Melody Festival (GMF) came from and where it may lead us in the future, it is essential to have a glimpse at Golden Melody Awards (GMA), which was established a lot earlier than its sister festival. Regarded as the Grammys for the Sinophone world, the GMA is one of the most credible awards in the industry. Established in 1990 by the Government Information Office, the Awards were created in post-martial law Taiwan and subsequently nurtured various talents from Taiwan, Hong Kong, China, Singapore, and China.

To take the category of ‘Best New Artist’ as an example, the winners who have become key figures in Mandopop include the Taiwanese-American singer-songwriter David Tao (1998), Stefanie Sun (2000) from Singapore and Li Ronghao (2014) from China. No Party for Cao Dong was also a major winner of the Golden Melody Awards in 2017, taking away three prizes including the ‘Best New Artist,’ ‘Best Band,’ and ‘Song of the Year.’

During the past 29 years, the award categories have gone through various changes which correspond to the flux of shifting music genres and the socio-political situation. Currently, the Awards are set to acknowledge the outstanding achievement of the singers, producers, albums, as well as songwriters across various lingual categories, such as Mandarin, Taiwanese, Hakka, and Formosan-languages, in popular and traditional music. Even though assigning some of the award categories according to languages rather than music genres has been strongly criticised by some artists and the public, it is also clear that the Awards carefully seek to encourage musicians who exhibit the richness of their linguistic and cultural heritage in music, outside of Mandarin popular music (Mandopop).

The renown of the Awards over the years has strongly reflected the significance of Taiwan’s role in the production of Mandopop. Moskowitz, a scholar of Taiwan’s Mandopop, emphasised both the cultural and economic importance of how Taiwan’s Mandopop has influenced China. He argues that it ‘exports a transnational musical ethos that is radical in comparison with the state-controlled music industry in the PRC.’ He also highlights that the total sales of Taiwan’s popular music also accounted for approximately 80% of Chinese-language music sales in the PRC from 2002 to 2010. Moskowitz also identifies the phenomenon that Taiwan – an island in the shadow of the PRC’s political and economic might – dominates the musical tastes of a huge nation, thus acting as a cultural ‘counter-invasion.’

However, as digitalization and the rise of Chinese music industries have challenged these advantages, it might make sense for Taiwanese musicians and labels to widen their focus to encompass not just the Chinese market but also look to other international markets.

With the shifting political and historical situation and its impact on music, the GMA has also changed. Indeed, since 2014, a series of events have often take place before the GMA Ceremony, including international conferences, networking sessions, business matching centers, and showcases.

Alongside the GMA ceremony, the GMF has brought key figures in Asian, European, American music industries, as well as international buyers and musicians. The aims of these events are, firstly, to facilitate business exchange between Taiwan and the world and secondly, to provide a vital business platform in Asia. The topics of international conferences always cover the latest trends and issues in the industry. This year, the topics include Opening Up Business Opportunities with Blockchain, Expanding Business Opportunities of Hip-Hop Music and Frenemy of the Music Industry: AI, to name a few.

In June 2018, there were three showcase nights. Apart from the artists previously mentioned, R&B singers Diana Wang and J. Sheon, Eric Chou, and Joanna Wang performed at Taiwan Night this year, while Lomosonic from Thailand, Bentham from Japan, and the Magnettes from Sweden played at the International Night. Tuan Chen, the director of GMF, says, ‘during the rehearsal, when I heard Sangpuy sing, I felt that the showcase this year represented the diversity of music and the musicians were ready to face the international market’. She further added that the GMF team had relentlessly communicated with performers and their managers, to ensure the musical arrangement and their performances were of high quality in order to capture the attention of an international audience. By collaborating in such a way with both the performers and managers, the language barrier could be transcended and thus the music could directly reach an audience who do not understand the lyrics.

Note for the Coming Showcases

The GMF showcase 2018, according to many delegates, was a great success. Ed Hayes, a speaker for the conference session on Hip-Hop music, has performed in various showcases internationally with his band Yuck as a guitarist.

He sings their praises by saying how well produced the showcase was and how welcomed he felt as a first-time delegate. For Ed, the act that caught his attention the most was No Party for Cao Dong, whose ‘great and clever guitar parts tickled my fancy, and they put in a good performance.’ Similarly, Philipp Grefer, the co-founder of Beijing based FakeMusicMedia, also finds No Party for Can Dong to be his personal highlight of the showcase. He also appreciates that the event covers a variety of acts and genres not only from Taiwan but also from the region, ‘I hope the showcase part of the festival will grow with more Asian and International acts participating,’ he adds.

Along with all the wonderful performances, No Party for Cao Dong has undoubtedly rocked the showcase this year. GMA and GMF will, indeed, continue to make more creative attempts to play a role in promoting musical exchange. A question we may pose is how the the up-and-coming musicians could be supported through this event in the future? How can they make the most of an opportunity like this? Regarding this, David Pichillingi, the CEO of Liverpool Sound City and Modern Sky UK, who runs a music business conference along with the festival each year in the UK, encouraged the musicians to be clear and realistic about what they want out of a showcase. He says ‘Do you want a record deal? Publishing deals or tours abroad? Make sure that you are connecting to the right people for the right reasons. ’ He also adds, ‘Always be true to yourself. Do not try to sound like bands from the UK or the USA’.

As we all look forward to hearing music’s next big thing, the GMA and GMF provide a platform for musicians who seek to engage with and reach out to new markets internationally. The long-term impact of these events in terms of bringing music to an international audience is worth researching and observing. That said, from my experience at the 2018 GMF showcase, it is fair to say that with a great performance, high-quality production, and the right audience, anything can happen.

Chen-Yu Lin is a research associate and adjunct lecturer in the Institute of Popular Music (IPM), Department of Music at the University of Liverpool. She also produces documentaries alongside her research and fieldwork. Image credit:金曲GMA/台視

Indie is the new mainstream? The conception of independent music in Taiwan
Quality Assurance System in Taiwan Higher Education: Challenges and Prospects