Why China and Taiwan agree on the South China Sea 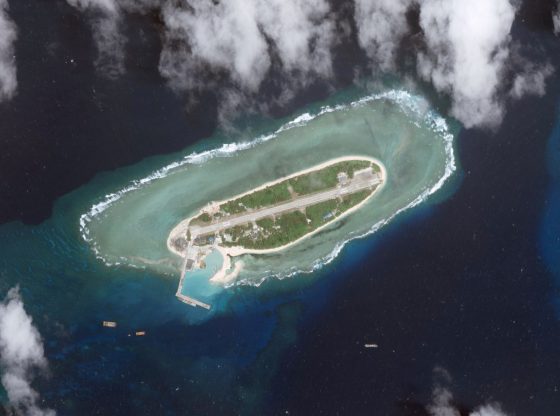 If there’s anything China and Taiwan can agree on, it’s that the contested scattered islands in the South China Sea are Chinese territory. But while China flexes its muscles to assert authority over the islands, making the maritime region into a geo-strategic hotspot, Taiwan has no such ambitions.

When the Permanent Court of Arbitration in The Hague ruled in July 2016 in favor of the Philippines against China’s claims, the Office of Taiwan’s president rejected the verdict in terms similar to Beijing.

The court found that China has no “historical right” based on its so-called nine-dash line map that encompasses nearly 90% of the South China Sea, including most of the maritime region’s islands.

China responded by saying it would not abide by the ruling, which it hasn’t judging by its recent moves to militarize the various features it claims in the area.

Among the facilities on Itu Aba are a 1,200-meter airstrip which caters to C-130 transport planes and smaller aircraft from Taiwan’s air force.

There is also a hospital, meteorological station, a shelter for fishermen, satellite telecommunications facilities, radar surveillance equipment, and a temple dedicated to Guanyin, the Goddess of Mercy in Mahayana Buddhism.

Chinese fishermen are known in ancient times to have visited the island — the only actual island in the Spratlys, as many would argue the others are little more than rocks, shoals and reefs. The island’s various histories vary as much as today’s claims.

Some have argued that France recognized the Spratlys as well as the Paracel Islands to the north as sovereign Chinese territory after the 1884-1885 Sino-French war. That is disputed by some historians, who argue that the maritime boundary applied only to Tonkin, today’s northern Vietnam.

In 1932, France did claim both island groups and the following year included them in French Indochina, which led to protests from a then weak China and a powerful Japan. But France did little to develop the islands beyond building a couple of weather stations.

In 1938, during World War II, Japan took the islands from France and established a garrison as well as a submarine base on Itu Aba. Administratively, the island fell under Taiwan, then a Japanese territory.

After the end of World War II, Taiwan was reunited with China and the islands in the South China Sea became part of southern Guangdong province. Chinese warships were dispatched to Itu Aba in 1946, and since then it has been controlled by the Republic of China.

In 1947, China’s leader at the time, Chiang Kai-shek, drew a U-shaped “eleven-dash line” map around the territory in the South China Sea that he claimed was all Chinese territory.

The problem with that claim, of course, is that since the communist victory in 1949 the republic he led has presided over only the island of Taiwan and a few small islets off the coast of Fujian, while the mainland became the People’s Republic of China.

Itu Aba has remained firmly under control of the government in Taiwan for decades, while the other countries now claiming the Spratlys paid little attention to the islands in the South China Sea before the 1970s.

The Philippines was the first to take action in laying claims. It sent troops to the islands in 1970 and 1971 and by 1975 occupied at least six of the islands, the largest being Pagasa, or Thitu, island, where a runway was built and soldiers were stationed.

The regional race to claim islands intensified in the 1980s, with Vietnam taking possession of 20 features based on earlier French colonial claims. In the early 1980s Malaysia took five reefs, while Brunei laid claim to but did not occupy a chunk of the disputed sea after gaining independence from Britain in 1984.

China sent navy ships to some of the islands for the first time in 1977, but did not begin to occupy any of them until 1987. China bases its claims on “historical rights” because its fishermen and seafarers are said to have visited them in the past.

When Qiao Shi, then chairman of China’s Standing Committee of the National People’s Congress visited Indonesia in 1993, he said: “There was no other claim to sovereignty over the Spratlys before. It’s only recently that some countries have different thoughts about sovereignty over the islands.”

In other words, China believed then that it was other regional claimants who started snatching up islands in the 1970s at China’s expense — and Taiwan agrees with that assessment.

While Taiwan seems content with controlling Itu Aba and has not aroused much complaint from other claimants, China’s reclamation of land, construction of air fields and establishment of military bases in the maritime area has turned it into a potential conflict zone, where great powers like the United States are concerned about freedom of navigation in the area.

China may have removed two dashes from Chiang Kai-shek’s original 11-dash map in the Gulf of Tonkin, making its claims now demarcated by a nine-dash line, but those claims are also based on rather dubious interpretations of historical records.

Beijing now frequently references Zheng He, the legendary 15th century Muslim eunuch who led seven large-scale voyages from China to South and Southeast Asia, the Arabian peninsula and the east coast of Africa. Beijing now claims that his voyage past the Spratly Islands means those islands historically belong to China.

But the detailed accounts and maps compiled by his aide Ma Huan list more than 700 place names along their voyages in those parts of the world while the Spratlys are hardly mentioned.

The reason is simple: apart from Itu Aba, the Spratlys are not islands but treacherous shoals and underwater reefs which the ancient navies sailed around to avoid being shipwrecked. Zheng He’s massive wooden junks would have been at particular risk.

Taiwan may have a less propaganda-driven and politically motivated approach to its historical accounts, but its President’s Office nonetheless reiterated its “stance that it holds sovereignty over the South China Sea islands and their surrounding waters” in response to the The Hague tribunal decision against China’s wide-reaching claims.

Not surprisingly, China’s state media at the time praised Taiwan’s stance. But the question still remains which China the Spratlys should belong to — the PRC on the mainland or the ROC on Taiwan — and for how much longer Taipei will maintain the historical notion of being part of a country from which it was separated from in 1949.

Bertil Lintner is a former correspondent with the Far Eastern Economic Review. He tweets at @gardlunden. This article was first published by Asia Times and has been republished with the permission of the editors. Image credit: CC by Asia Maritime Transparency Initiative/Flickr.