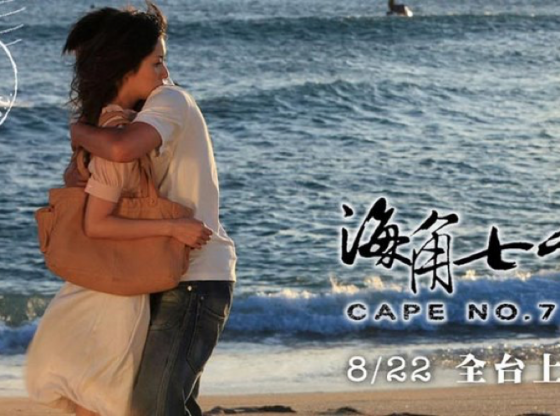 Taiwan New Cinema (TNC) is a cinematic movement that emerged in the 1980s just as democracy was introduced to the island. Its impact cannot be overstated: TNC not only expanded cultural frontiers, but also made possible multiple and alternative onscreen representations of Taiwanese identities and historiographies. Today, the work of cinematic auteurs associated with the first and second waves of TNC continues to attract accolades at prestigious film festivals.

On the other hand, Taiwan’s film industry experienced serious setback when the domestic commercial film market became completely dominated by Hollywood in the 1990s. The long-term decline continued into the twenty-first century until the appearance of Wei Te-sheng’s debut feature film, Cape No.7 (2008), which became the most profitable locally made movie in Taiwan’s history.

Prior to Cape No.7, there were several local productions which caught the popular imagination. Yet the popularity of these films did not stimulate a revival, and the struggle for screenings in movie theatres continued. In contrast, the box-office performance of Cape No.7 gathered momentum in 2008 and encouraged positive signs of improvement. For researchers of Taiwan cinema and cinephilia, this new period of movie-making and consumption raises several questions: Did Cape No.7 usher in a new dawn of filmmaking on the island? What are the characteristics of the so-called ‘post-New Cinema’, and who are its representatives? What is the relationship between the younger generations of Taiwanese filmmakers and the renowned TNC masters? Can we claim that post-New Cinema embodies the legacies of TNC, or does it demonstrate their complete rupture? Moreover, how do these new Taiwan-based filmmakers maintain their presence on the international film festival circuit, and are their films reaching global audiences?

Researchers suggest that the foremost characteristics of ‘post-New Cinema’ are a penchant for a ‘post-sadness’ approach to traumatic historical subjects, and an emphasis on a more ambivalent interpretation of events through well-designed audio-visual strategies. They consider Wei’s Cape No.7 one of the most important examples of the post-New Cinema. Therefore, Chiu Kuei-fen, Gary Rawnsley and myself decided to use filmmaker Wei Te-sheng as a gateway to analyse and answer the above questions. The result is an edited volume published by Routledge in 2017, Taiwan Cinema: International Reception and Social Change. Part I of this collection discusses Wei’s films through lens of cinephilia and by addressing discourses of international film festivals. The contributors in Part II unpack the multiple layers of emotional and intellectual investment of Taiwanese audiences in Wei’s works through film analysis, studies of genres and styles of history films, and historiographical approaches to Taiwan cinema. While each contributor offers an exciting new perspective from their own backgrounds and interests, collectively their work announces a common theme: An international/global versus national/local paradigm can trigger quite varied expectations of, and responses to movies.

Wei Te-sheng rejects the arthouse film mode of aesthetics that has advanced TNC and its auteurs to the global stage. Instead he chooses to work within a commercial framework and adopts Hollywood formats and melodramatic performances. One may argue that Wei prefers to entertain local viewers rather than privilege international cinephilia, and this above everything sets him apart from TNC auteurs and their followers. However, close examination of Wei’s movies and filmmaking practices reveals undeniable similarities with his TNC predecessors.

Like many TNC filmmakers, Wei Te-sheng demonstrates a deep interest in suppressed Taiwanese collective historical memories. Cape No.7, Warriors of the Rainbow: Seediq Bale (dir. We Te-sheng, 2011), as well as a film he produced, Kano (dir. Umin Boya, 2014), are all based on real historical events. As the chapters in the volume of Taiwan Cinema testify, these films generate critical debates about the past, present, and future of Taiwan and its film industry. Wei’s films provoke a rich reflection on modern Taiwan—just as the first wave of TNC did in the 1980s—and generate a wide spectrum of political readings.

The Japanese colonial legacy, absent from discussion in the martial law period, appears prominently in both TNC and in Wei’s films. Chiu Kuei-fen has observed that most pre-TNC films tend to cast Japanese characters in a very negative light, while many TNC outputs offer less negative and non-judgemental portrayals. Wei’s post-millennium films push beyond the TNC and construct an ambivalent rapport between the Taiwanese characters and their Japanese colonisers. It is not surprising that Wei’s portraits of Taiwan’s colonial relationship with Japan are controversial. One may argue that the resurrection of suppressed colonial memories and the recasting of Japanese figures in a positive light demonstrates Wei’s active participation in the revision of Taiwanese historiography.

Another noteworthy feature of Wei’s films is the weight of indigenous culture and history. Both Seediq Bale and Kano cast indigenous people as the main characters. From the outset Wei was determined to involve Taiwan’s indigenous communities in the making of Seediq Bale, and made sure they were taught how to speak their lines in the almost extinct Seediq languages (mainly Tgdaya and Toda). At all stages of production, Wei consulted with experts in the Seediq culture. Moreover, the whole story is told mainly from the perspective of the Seediq warriors, and the focus of the story is their leader, Mona Rudao. Wei was the producer of Kano, which is directed by Umin Boya, the indigenous actor cast in Seediq Bale as Mona Rudao’s rival from another tribe. Four out of the nine baseball players in Kano are from various indigenous communities. Therefore, these two films make an extremely positive contribution to the representation of Taiwan’s indigenous people, in terms of story and production, as well as their part in Taiwan’s history. Finally, the multicultural band in Cape No.7 featured guitarist Lao-ma. Although not a central character, his inclusion is an important demonstration of the declining divisions in Taiwan society. The attention to indigenous culture and history in Wei’s films is rarely found in TNC.

Without doubt, Wei Te-sheng is one of the most interesting and innovative post-New Cinema film directors working in Taiwan today. His films offer specific and localised interpretations of Taiwan’s history and identity, but they also voice universal concerns such as love, heroism, family, friendship, life and death. The diversity of audience reception and interpretation of post-New Cinema represented by Wei—in cinemas and in the more formal space of film festivals—lies at the heart of our edited book which not only brings together the local and the global, but also chronicles the development of Taiwan’s film industry. This narrative is set against the background of another, equally exciting story of social and political liberalisation and democratisation that has impacted on how people in Taiwan see themselves and their history. These forces, external to the movie industry, have shaped and in some instances have been shaped by the power of cinema.