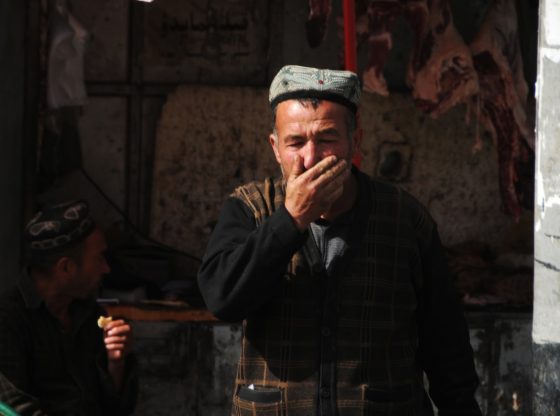 Five years ago the then Deputy Governor of Xinjiang Shi Dagang 史大刚 said that the local minorities were “too busy dancing and singing to make trouble”. Shi Dagang claimed that “every time we are guests in ethnic minority homes, we are treated with good meat and wine. They sing and dance. Ethnic minorities are very simple and kind in such matters, generous and passionately hospitable”. Well, who could say no to entertaining a visiting governor?

For a number of years a stereotypical image of Uyghurs as “good at dancing and singing” (能歌善舞) has been promoted by the Chinese authorities, and this fits well with the increasingly unified image being created of non-Han ethnic groups in the PRC: colourful dresses, women with plaited hair, and dancing and singing. Even male Uyghur military officers are portrayed in this way, although the expression “good at singing and dancing” (能歌善舞) has been mostly used to describe women. In 2013, members of the September 3rd Society (九三学社) in Xinjiang – one of the so-called “democratic parties” which support the CPC (Communist Party of China) – proposed making Nasreddin Ependi (“Ependi”/Afanti 阿凡提) “an image ambassador” (形象大使) for Xinjiang. However, they were not interested in the content of the many stories about Ependi or his role as a cultural symbol in Central Asia and the Middle East. Instead, he was to be “packaged” as an image ambassador to “promote party policy, promote outstanding Xinjiang, and introduce Xinjiang development”.

Alongside the “singing and dancing”, the official narrative of Xinjiang and the Uyghurs has often had a pedagogic tone, of telling “truths” in the manner of “seeking truth from facts” (实事求是). One large-scale project started in November 2011, which aimed to publish a series of ten books over a five-year-period (two per year) under the title: “The Xinjiang Ethnicity Religion History Book Series” (新疆民族宗教历史系列丛书). These books were to have a “succinct length and simple language”, and were aimed at “answering the issues that the masses care for most, and to help the masses of all ethnicities have a deeper understanding of the history of Xinjiang, of its religious and ethnic transformations, as well as of the state laws and policies”. The books were given for free to religious leaders from all over the province. Since 11 September 2001, ever harsher measures have been employed against supposed “splittism” and terrorism in the region, while still maintaining an air of “singing and dancing”. The book series from 2011 is an interesting example of the paternalistic and hegemonic rhetoric that prevails, showing how the Chinese party-state claims the right of interpretation over everything: the history of Xinjiang, “religious and ethnic transformations”, and any “issues that the masses care for most”.

But are the conflicts and tensions the things that we hear and know about Xinjiang? Or is it perhaps only “singing and dancing”? Those who control or claim the narrative narrow the spectrum of images we see. Xinjiang may seem utterly far way, both in time and space, landlocked and far from the ocean, almost at “the end of the Earth”, to use a Biblical phrase. However, according to the Book of Han (《汉书》《西域传》上), 2000 years ago the population of the Kashgar area had already reached nearly 20,000. Have we heard of the Buddhist kingdom in Kucha, Eastern Christian churches around Taklamakan (including paintings of Palm Sunday processions from the eighth century in Qocho (Gaochang), Sufism, Mazar pilgrimages or the lexicographer Mahmud al-Kashgari (1005–1102)? And what about Uyghur Jadidism in the early twentieth century or the 1920s debate around using the name Uyghur for the people now called so? What history and which narratives are we accepting? What historical links are missed?

Kaschgar, Kabul, Lhassa! – the triumvirate of darkness in innermost Asia. The names should be pronounced with a dark accent since there is heavy darkness in their depths.

The Swedish missionary John Törnquist (1876-1937) wrote the words above in 1926 in the foreword of his book Kaschgar, more than 20 years after arriving for the first time in Kashgar. He was one of 60 Swedish missionaries working in southern Xinjiang from 1892 to 1938, establishing churches, hospitals and schools, as well as the only printing press in the area. Perhaps this is an anomaly in Xinjiang history, but it is an important one, as the missionaries’ photographs and other material collected in Swedish archives represent an important part of Uyghur cultural history.

Törnquist further writes that “…Kaschgar is first among the triumvirate to subject to illumination”; “illumination” in his view being modernisation and reception of the Christian message. Törnquist continues his optical and photographic imagery throughout his foreword, and adds that “the bright images appear bigger and the shadows smaller through diffraction”, but that he will constrain himself so as not to increase this distortion in his writing. He finally adds that “in this illusion lies also the comfort that light is stronger than darkness”.

We need such a reflection today in regard to Xinjiang too. What is distorted through the diffraction of official narratives and propaganda? Do the brighter images appear bigger and the shadows smaller? We already hear about happily “singing and dancing” Uyghurs emerging from so-called “vocational and educational training programmes” – programmes which are also called “re-education camps”. This is an obvious distortion, but what happens in parallel? We need to study Xinjiang from many perspectives, through many methods and from different academic fields to see as clearly as possible.