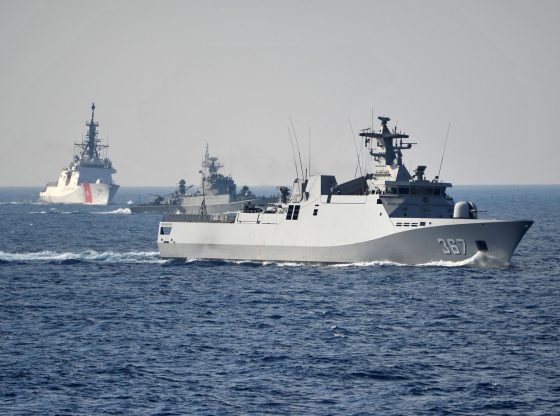 Since the early 2010s, Taiwan has significantly strengthened its coast guard fleet with larger capacity by acquiring seven 1000-ton, two 2000-ton, and two 3000-ton OPVs, as well as four 4000-ton cutters under construction.

Taipei first deployed coast guard vessels to replace its marine garrisons in Itu Aba and Pratas in 1999. At that time however, the Taiwanese coast guard did not have an adequate fleet to deploy in the South China Sea however these large vessels were commissioned. Before the four large OPVs, Taiwan’s coast guard fleet was only second to China’s among the South China Sea claimant states, but the distance makes such an advantage meaningless due to the limited operation period and number of deployed vessels Taipei could maintain on site. With the four 4000-ton ships, Taipei will be able to send each month three large OPVs to the South China Sea, and each can stay onsite at least 12 days, thus achieving a continued at sea presence.

Taiwan’s new Offshore Patrol Vessels, equipped with a medical capacity equivalent to a field hospital and a helicopter deck and hanger for operating a UH-60 Black Hawk, will have potential for carrying out humanitarian aids and disaster relief (HADR) operations. An increasingly important issue in the regional security of East Asia. In parallel, the onshore coast guard units on Taiwan’s South China Sea holdings will upgrade their firepower with M-114A1 155mm howitzers. Weapons with a far longer range than the existing 120mm mortars and other weapon systems.

Taiwan’s coast guard build-ups are a mainstream approach in the South China Sea. Sending in the coast guard, a law enforcement department, not only strengthens the sovereignty claim, but also lowers the chance of accidental war, as the vast majority coast guard vessels are not armed.

Among the South China Sea claimants, only Brunei’s police coast guard is not equipped with Offshore Patrol Vessels. Some major ones, such as China and Vietnam, have broadly applied coast guards for confrontation and low-intense conflicts. For Taiwan, deploying the coast guard reveals another consideration: the political dilemma. The Republic of China (ROC), the official title of the Taipei authority, is actually the creator of the eleven-dash line, the foundation of Beijing’s nine-dash line, and the ROC’s official territorial claim on the SCS mirrors that of mainland China’s. In reality, Taiwan has neither the resources or proximity to back its claims. Likewise maintaining amicable relations with adjacent Southeast Asian countries are crucial for its economy and diplomacy in the face of the heavy pressure from China.

However, to waive or merely adjust territorial claim inevitably could be related to the most sensitive issue, its de jure independence. Furthermore, it is easy for any country to give up its controlled territory, so is Taiwan regarding Itu Aba and Pratas. Thus, applying coast guard to the SCS, actually earlier than other claimants, could be also seen as Taipei’s solution comprised of legal, political and other concerns.

Despite considerable efforts, Taiwan’s coast guard would face some challenges in SCS. Firstly, Taiwan’s international isolation unavoidably impedes cooperation and other interactions between its coast guard and the international counterparts. For example, Taiwan’s coast guard is unable to participate in the exercises and other activities held by the Regional Cooperation Agreement on Combating Piracy and Armed Robbery against Ships in Asia (ReCAAP). Similarly, Taiwan is also excluded in the process of making the code of conducts between China and the Association of Southeast Asian Nations (ASEAN).

Therefore, Taiwan’s coast guard may be an inferior position in terms of information sharing, accident prevention and other issues in the highly internationalised South China Sea. In case of conflict, particularly with foreign counterparts, such as with Beijing, the detachment of Taiwan’s coast guard would be seriously tested.

Secondly, Taiwan’s coast guard has no manned aircraft. Taiwan’s coast guard is indeed introducing rotary drones with a 30km radius which would be too narrow to the SCS. Despite the facilities for helicopters, the coast guard relies on the Black Hawks from the National Airborne Service Corps. In waters adjacent to Taiwan, a task force between the two departments would be workable, but the deployment thousands of kilometres away would require a more ambitious arrangement. Based on the large size of the SCS, fixed wing aircraft would be useful for search and patrol in addition to vessels. The ROC Navy’s P-3C maritime patrol aircraft would serve this role, but they could be occupied with other naval missions, such as anti-submarine.

Thirdly, it is much quicker to build ships than to mature a talent pool of both quality and quantity. Since the expansion of large OPVs, shortage of personnel has appeared as a challenge. Within the shrinking demographic structure and career competition with the militaries and commercial maritime, Taiwan’s coast guard would face difficulties of recruitment and retaining experienced personnel. Finally, unlike other claimant states with geographic adjacency, Taiwan’s naval and air powers may not rapidly support its coast guard. In other words, there would be narrow or no space of escalation in conflicts.

Expanding the coast guard for more presence in the South Chin Sea is a continuous strategy conducted by the administrations of both Ma Ying-jeou and Tsai Ing-wen. In the near future, Taiwan’s role in the troubled water will be enlarged, adding a new factor to the complicated situation. If Taiwan’s coast guard onsite presence is durable and significance, it may create a favourable circumstance for functional participation in some international activities on the SCS. Before that, the constraints mentioned above nevertheless would challenge Taiwan’s decision makers, policy planners and field commanders on how to properly operate their remote coast guard units.

Chess masters and poker players: ways to understand the politics of policy-making in Xinjiang
The Xinjiang camps as a “Stanford Prison Experiment”