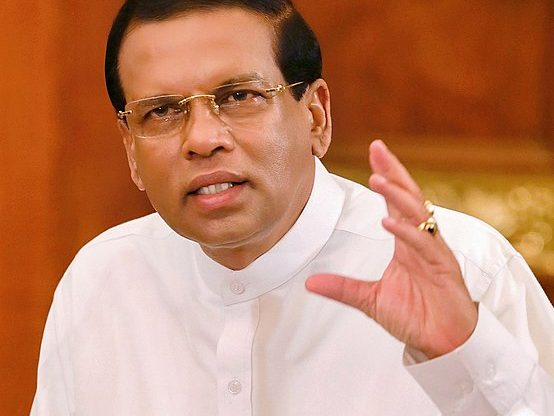 …whilst constitutional nuances may be debated, the fact of the matter is “the event was planned in complete secrecy, with no consultation of Parliament or giving the serving Prime Minister and Cabinet” notice. This clearly marks the president’s actions as unconstitutional and illegal.

Sirisena insists that it is within his rights to replace Wickremesinghe as according to article 42(2) of the Sri Lankan Constitution; “the President shall appoint as Prime Minister the Member of Parliament, who, in the President’s opinion, is most likely to command the confidence of Parliament”. This was immediately rebutted by Wickremesinghe and his supporters who insisted that he remained the legitimate Prime Minister and decried Sirisena’s actions as “unconstitutional and illegal”.

In his response he turned to the passage of the 19th Amendment in 2015. This amendment maintains that “the Prime Minister can only cease to hold office by death, resignation, by ceasing to be a Member of Parliament, or if the government as a whole has lost the confidence of Parliament by a defeat on the throne speech, the budget, or a vote of no-confidence (Articles 46(2) and 48)”.

Nikiforov maintains that whilst constitutional nuances may be debated, the fact of the matter is “the event was planned in complete secrecy, with no consultation of Parliament or giving the serving Prime Minister and Cabinet” notice. This clearly marks the president’s actions as unconstitutional and illegal.

For Rajapaksa to assume the Premiership he will need to gain the additional support of more than 18 MPs. This would allow him a majority in parliament. Before these events unfolded, Rajapaksa’s United People’s Freedom Alliance (UPFA) possessed only 95 MPs, less than the Wickremesinghe UNP which has 106 MPs. At the current moment, only 3 UNP MPs members have defected, but more are expected to follow.

Concerns for the future

Commentators have noted that this crisis presents a serious threat to the freedom of press as well as the process of reconciliation. In 2015 Sri Lanka co-sponsored the Human Rights Council Resolution 30/1 which reaffirmed the importance of accountability for war crimes; the return of land occupied by the Sri Lankan military; and support for democratic administrations in the war-affected north and east.  Responding to this crisis Brad Adams, Human Rights Watch’s Asia Director, has described Rajapaksa’s return as “chilling”. His press statement further adds that:

“Rajapaksa’s administration was implicated in egregious violations during the final stages of Sri Lanka’s brutal civil war and in suppression of freedoms of the media, expression, and association. Military forces under Rajapaksa’s authority indiscriminately attacked civilians and summarily executed prisoners during the final months of fighting against the Liberation Tigers of Tamil Eelam (LTTE). People with suspected links to the LTTE were subject to arbitrary arrest, torture and sexual violence, extrajudicial killings, and enforced disappearances. Journalists and activists critical of the Rajapaksa government faced harassment, arrest, and even physical attack.”

Alexander Nikiforov, a noted legal scholar, describes this as a “constitutional coup”.

Fear of the repression of speech have already been realised, as the Tamil Guardian reports that:

“Unions loyal to the Mahinda Rajapaksa’s  Sri Lanka Podujana Peramuna Party (SLPP) seized editorial control of major publications at the press house on Saturday.  Editors of Sundayobservor.lk and dailynews.lk reported that they were forced to leave after ceding editorial control to Rajapaksa loyalists”.

Failure of the Previous Administration

In responding to the crisis the Sri Lanka campaign notes that the alliance between Sirisena and Rajapaksa is not all that surprising given that the Sirisena was “acting Defence Minister during the end of Sri Lanka’s brutal civil war and someone who has made repeated promises to protect human rights abusers from justice”. They maintain that it is “the failure to adequately deal with the legacy of the war, and to ensure accountability for atrocities committed” that has enabled this crisis.

Wickremesinghe was appointed PM after Sirisena had gained a victory in the 2015 presidential election. The government presented itself as a moderate; willing to tackle the corruption of the Rajapaksa administration; implement institutional reforms to limit the power of the President; and desiring progress in terms of reconciliation.

On the 8th October 2018, Wickremesinghe delivered a speech to the Oxford Union in which he addressed questions of accountability and reconciliation. One exchange stood out:

“Audience Member: Far from justice and reconciliation there have been instances of torture and sexual violence documented by human rights groups like ITJP and freedom from torture as recently as this year […] Why haven’t you taken any steps to end it?

“Wickremesinghe: […]It’s a long process this is not something you can do overnight you have to know public opinion there are people who are against it there are people who feel that we are unnecessarily probing into it. So we built up the public opinion, moved ahead, carried the religious head,  got their support, and by early next year you have the truth and justice Commission which can go into many cases but there’s a question of in some, there is a question of the evidence required for a criminal case.”

In this retort we see the underlying problem that plagues Sri Lanka. Firstly, he attempts to mitigate and undermine reports of sexual violence to protect the impunity of the state’s security force. Secondly, he notes that these investigations are dependent upon “public opinion” and in particular on their ability to carry “the religious heads”.

Sri Lanka’s predominated problem is not that it is a democracy but as Tamil activist Sutharshan Sukumaran has stated “it’s Asia’s oldest ethnocracy. It collapses everytime attempts have been made to restructure towards an equitable state for all communities. 1958, 68, 83, 2005, 2009-15, 2018”. A spirit of Sinhala Buddhist nationalism has gripped the post-colonial nation and it is precisely the Buddhist Sangha that perpetuates the conflict and refuses conciliatory actions such as greater devolution. It is their support that has emboldened Rajapaksa, a man whom the Tamil community view as a war criminal.

Virbuen Nandakumar is a recent graduate from the London School of Economics, where undertook an MSc in Political Theory. He also contributes to the online newspaper Tamil Guardian. Image Credit: CC by Wikimedia Commons/President Media.

The Poetics of Tsai Ming-liang
How will China’s Belt and Road Initiative impact on Brazilian food systems?