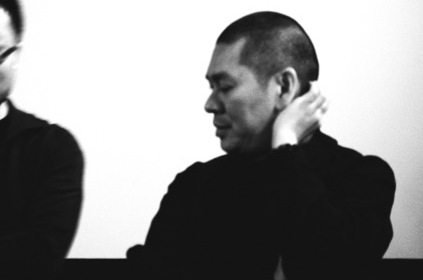 “I think that our present age is probably the worst time of all to be alive… Living in today’s world is terrible, I’m always scared of not being able to keep up.” (Tsai Ming-liang)

Tsai Ming-liang is an important figure of contemporary Taiwan cinema. His career started as part of the second wave of Taiwanese New Cinema. He made his first full length feature film in 1992 and has since produced nine other films. After his last full-length film, Stray Dogs (2013), he announced his retirement from feature film making. Since this announcement, Tsai has been concentrating on short films, documentaries, and creations that could be labelled as “extended cinema” projects. In 2012 just before his last feature film, he made the first instalment of his Walker-series – a series of short films featuring a monk dressed in red robes, walking very slowly in various cities on different continents. In many ways, the first part of the series (The Walker, 2012) summarises the main stylistic features and motifs that had already been present in his earlier works. I will use the example of this short film to demonstrate some of the overarching features of his film art.

Tsai Ming-liang is considered to be one of the leading figures of the international trend labelled slow cinema or Contemporary Contemplative Cinema. This trend has been present since the 1990s when more and more film festivals welcomed directors who presented works going against traditional plot development structures and dramaturgical conventions by making slow, contemplative, and ‘boring’ films. This type of film obviously has existed before in film history, but what seemed to be new was the amount of film using the strategy at the same time and the exaggeration of the slow elements in these films. There seems to be a consensus that the trend started to take shape at the beginning of the 1990s. Most scholars seem to agree that the Hungarian director, Béla Tarr’s films – starting from the black and white Damnation and followed by the seven and a half hours long black and white film Satan’s Tango– had a major influence on the formation of the trend. Lim Song-hwee also argues in his book about Tsai Ming-liang and slow cinema (Tsai Ming-liang and a Cinema of Slowness) that Tarr and Tsai are possibly the two major figures of this trend.

Tsai is also an auteur in the most classical sense of the term. On the one hand authorial subjectivity plays an important role throughout his oeuvre: the biographical motifs in his stories and situations seems to be evident in almost all his films. The experiences of an outsider (he is Malay-born, arrived in Taiwan to do his studies in Taipei when he was twenty years old) is a recurring motif that defines the atmosphere of his cinema. On the other hand, the coherence and interconnectedness of motifs, characters, and the plot lines overarching several films makes the whole oeuvre a unified, continuous flow of films. By watching his films in the order of their creation, it definitely creates an added value to the overall experience of his art. His film The Walker (2012) is a remarkable imprint of the organic structure and the contemplative nature of the oeuvre – a metaphor of his art squeezed into a 25-minute-long short film.

The Walker builds around the figure of a man who wears the red robe of a Buddhist monk and walks extremely slowly on the streets of Hong Kong. The man seems to be frozen in comparison to his environment as if he was moving in a different time dimension. He embodies the words of Tsai Ming-liang quoted in the motto of my article: the fear of not being able to keep up with the speed of the present, but this walker also represents the struggle and persistence in the face of these fears. The figure of the walker, whose moves evoke the Buddhist practice of walking meditation, can easily be interpreted as the alter ego of the director.

As well as the slow style and the presence of the alter ego, the film also condenses into a tableaux with further stylistic and motivic features of Tsai’s oeuvre. First of all, Walker consists of twenty-one shots recorded by a fixed camera. The long take recorded by a non-moving camera is one of the most striking stylistic features of Tsai’s films. This short film freezes into fixed long takes, the most important theme and forms to this director’s cinema. The next part of this article will show you some of these pictures and their connection to the oeuvre’s features. (I call “picture” here the different episodes that were shot at the same location. There are some “pictures” that are presented in two or three shots.)