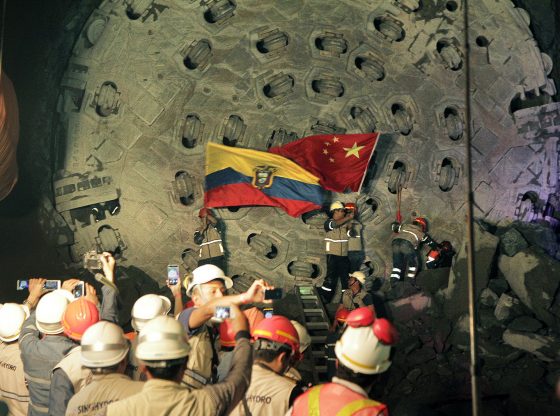 Diplomatic ties may be fraying between the US and China, but the United States’ traditional economic partners in Latin America are growing closer to the Asian giant, particularly as regards infrastructure finance. Seven Latin American and Caribbean (LAC) countries have joined the Belt and Road Initiative and seven have applied to join the Asian Infrastructure Investment Bank. This burgeoning relationship brings major opportunities to LAC, but it circumvents the traditional environmental and social safeguards of western development finance institutions (DFIs), potentially bringing important risks to ecosystems and communities in the region.

The Andean Amazon – the western Amazon basin and central Andean highlands of Ecuador, Peru and Bolivia – is experiencing an infrastructure boom with help from international DFIs.  This infrastructure boom is not only surging but also moving into more sensitive territory. From 2000 to 2015, 64 international DFI-financed infrastructure projects were completed in the Andean Amazon, including many hydroelectric dams in the Andean highlands on the edge of the Amazon basin. Since then, 58 new projects have already been completed or approved, about half of which are within the Amazon basin itself.

Chinese DFIs – the China Development Bank and the Export-Import Bank of China – play a major role in this expansion. While Chinese DFIs accounted for fewer than one in 10 projects between 2000 and 2015, today they are financing a quarter of all new projects – and a third of those in the Amazon basin itself.

The western Amazon is particularly challenging as regards infrastructure planning, since it boasts the richest level of biodiversity in the southern hemisphere, as well as the ‘uncontacted frontier’ – the highest concentration of voluntarily isolated and uncontacted indigenous communities on Earth. As the infrastructure boom shifts into the rainforest, the region is at a crucial juncture for determining how exactly it will unfold.

Demand in Latin America and the Caribbean for infrastructure expansion seems well-matched with China’s pursuit of ‘a new type of international relations with win-win cooperation at the core’ of its relationship with LAC. However, Chinese DFIs have a relatively passive approach to environmental and social risk management (ESRM), which represents a crucial aspect of projects in this sensitive environment.

Like many development banks based in the global South, China’s DFIs rely on the borrowers’ own environmental and social standards. However, unlike their multilateral peers in the global South, (such as the Development Bank of Latin America, known as CAF), Chinese DFIs do not participate in overseeing projects to ensure those standards are met, or assist borrowers in reaching them.

The passive nature of the Chinese DFIs’ ESRM circumvents the safeguards that DFIs use to hold governments to account for their commitments. This approach has its own benefits of course: projects are approved more speedily, avoiding what Chris Humphrey calls the ‘hassle factor’ of traditional DFIs.

However, this deferential form of ESRM may attract projects that have failed in relation to the safeguards of other DFIs, or which pose enough risk to make traditional DFI financing time-consuming or potentially impossible. DFIs do not regularly publish information about rejections, so it is not known which Chinese-financed infrastructure projects were previously rejected elsewhere. However, bank records show that planners for some of the region’s largest flagship projects – such as Ecuador’s Coca-Codo Sinclair dam – sought Chinese financing after years of seeking approval through DFIs with a more active approach to ESRM.

ESRM in action: the case of Coca-Codo Sinclair

Over the last two years, Boston University’s Global Development Policy (GDP) Center has partnered with colleagues at academic institutions across the region to explore the extent to which ESRM affects project outcomes. Among the cases studied was Coca-Codo Sinclair (CCS), Ecuador’s largest hydroelectric dam. CCS was financed by the Export-Import Bank of China (CHEXIM) and built by Sinohydro, though it had previously been considered by the Inter-American Development Bank (IDB).

CCS borders small, but non-indigenous, communities, which are not covered by Ecuador’s guarantee of prior consultation for indigenous nations. Instead, these communities had informational meetings where community concerns were noted. Interviews with community members show a near-universal understanding that CCS promised ample local employment and contracting for worker lodging. However, the lack of formal stakeholder commitments meant that the community had little recourse when the contractor brought workers from another Sinohydro site in coastal Ecuador and housed them in a separate worker camp, leading to significant social conflict and protests.

The environmental impact of CSS was assessed in stages, corresponding to two separate loans: one for the dam and one for associated high-tension power lines. No comprehensive assessment of the entire project was performed, nor were cascading risks between the two components considered, as would be required with IDB financing. Unfortunately, the actual environmental impact of CCS is unknown, because of insufficient transparency. Coca-Codo Sinclair was charged with performing its own environmental audits (presenting serious conflicts of interest) but has not published them as required.

Thus the deferential ESRM of the Chinese policy banks enabled this flagship project to be approved quickly.  Nonetheless, ambitious projects like CCS stretch the oversight needs beyond borrowers’ expertise and create incentives to disregard due diligence. By establishing its own set of standards, as the World Bank or IDB do, or by helping national institutions to enforce their own standards like CAF does, CHEXIM could help prevent similar problems arising in future projects.

Despite these problems, our work suggests that bank safeguards alone cannot determine the environmental and social impacts of infrastructure projects. If that were true, any project financed by DFIs which have the strictest standards – such as the World Bank or IDB – would have universally positive outcomes, which did not transpire.

Nor are strict national regulations sufficient, though governments do ultimately oversee the enforcement of norms. Ecuador, Peru and Bolivia’s standards are among the world’s most ambitious, covering indigenous consultation, labour rights, and liability for environmental damage. However, none of the case studies showed national standards being implemented adequately.

Instead, this research shows that safeguards succeed or falter depending on the degree of collaboration between banks and national authorities. Safeguard implementation appears to be associated with mutually reinforcing networks on both sides. DFIs and national governments have similar – but not identical – project goals, and answer to different constituencies. Through collaboration on project oversight, they can ensure that a wider range of concerns is considered, and a broader array of resources harnessed to address them.

In this context, the deferential ESRM of Chinese DFIs puts them at a disadvantage relative to other DFIs. LAC’s burgeoning relationship with China has generated new partnerships and opportunities for development finance, but also new risks that will need to be mitigated to ensure a truly ‘win-win’ relationship for all.

Rebecca Ray is a Postdoctoral Fellow on GDP’s Global Economic Governance Initiative (GEGI). She holds a PhD in Economics from the University of Massachusetts at Amherst and an MA in International Development from the Elliott School of International Affairs at the George Washington University. Since 2013 she has focused her GEGI research on Latin America, including the annual China-Latin America Economic Bulletin series, the book project China and Sustainable Development in Latin America: the Social and Environmental Dimension, and her current project, Safeguarding Sustainable Development in the Andean Amazon. Image Credit: CC by Archivo Medios Públicos EP/Flickr.

What’s new with Chinese investment in Latin America (and what’s not)?
The Journey of Taiwan Cinema: from Taiwan New Cinema to post-New Cinema