The indigenous tribes of Bangladesh: small voices lost in the sea of frustration 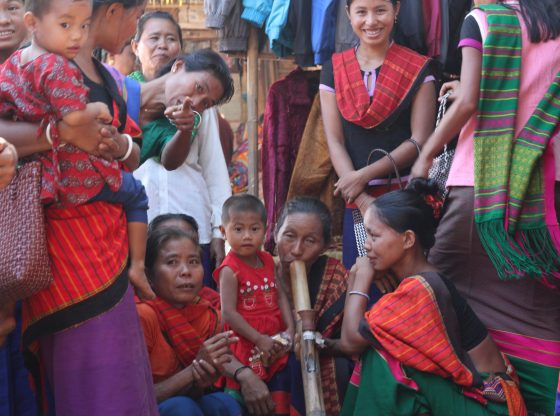 Bangladesh, with its broken electoral system, diminishing democracy and neglected human rights, lives in a state of violent peace. The student protests that broke out in August 2018 gave the citizens a glimpse of what order and decency could do for the welfare of the country, only to be buried beneath government clampdowns and violence leading from the ensuing protests by public vehicle operators. Bangladeshis are silenced, exploited, abused and too conditioned to respond with a blind eye to being robbed of their basic civil liberties. So when the voices of the majority have been snuffed out so many times, what hope is there for the people who live on the margins?

The only means, however flimsy, for safeguarding the rights of the CHT people is to have more representatives within the mainstream political parties of Bangladesh.

The Chittagong Hill Tracts (CHT) region of Bangladesh is home to the biggest settlements of Bangladeshi indigenous tribes, separated from mainstream Bangladeshis by religion, culture and livelihood. According to the 2011 Census, the indigenous or Adivasi population makes up approximately 1.8 per cent of the total population, but this is a contested percentage given that the tribes report higher numbers. The CHT region was annexed by the British in 1860 and the tribes given autonomy and protection from exploitation of their economic, cultural and social practices. After the division of Bengal, the CHT was made a part of East Pakistan and consequently a part of the modern-day port city of Chittagong. Historically, the people of the CHT tribes, while they still held autonomy over the region, wanted to be integrated with India due to their similarity in cultural and religious practices. This helped paint them as outsiders, not part of mainstream Bangladesh, especially since they refused to adopt Bengali cultural practices and wished to retain autonomy over their land. The conflict with the CHT people has more to do with the land they occupy than their refusal to accept Bangladeshi norms, but it has formed the basis of perpetual strife as the government continues to impose a hegemonic national identity over all citizens.  It has also created grounds for creating impediments to the development of the CHT people, slowing down initiatives for their welfare and education or advancement of their livelihood opportunities.

Bangladesh is no stranger to severe human rights violations and man-made disasters, often with little or no political retribution or actionable response. It is not a safe country for women, whether professional or homemakers, it is not safe for students or activists or progressive thinkers, and it is not a safe country for minimum wage workers. It is understandable that in these conditions, the concern for the voices of the CHT people is muted. But it is vital for the global image of Bangladesh that they not be forgotten. The Bangladeshi government has signed multiple international agreements such as the International Convention on the Elimination of all forms of Racial Discrimination (signed in 1979) and the International Covenant on Civil and Political Rights (ratified in 2000), and committed to following the Sustainable Development Goals, which include six specific provisions for indigenous populations, about which the Prime Minister has claimed to lead by example. Domestically, the current political administration, during its tenure in 1997, signed the Chittagong Hill Tracts Peace Accord after years of conflict between the Bangladeshi military and the guerrilla forces of Shanti Bahini, which formed under the Parbatya Chattagram Jana Sanghati Samiti (PCJSS) over the oppression of the CHT people.  To this day, grievances still exist over the neglect and improper implementation of the Accord among the tribes.

Despite the existence of these treaties and accords in regard to policy-making for the CHT region, the provision of welfare, social justice and protection remains an unfair and ill-implemented system, and not only because these measures remain blindly top-down in their inception. The idea of ‘the other’ is a deeply embedded sentiment among Bangladeshis, and the brunt of such discrimination is openly borne by all minorities that reside in the nation. The only means, however flimsy, for safeguarding the rights of the CHT people is to have more representatives within the mainstream political parties of Bangladesh. For decades, the CHT people have been represented by officials chosen by the incumbent government. However, a look at the Ministry of Chittagong Hill Tracts Affairs website shows how the history of the region has been misrepresented to fit the narrative of a democratic Bangladesh. This appearance of peace stands even as reports continue to flow in about the authorities refusing to take action against multiple cases of rape of tribal women and girls or the abduction and torture of tribal leaders.

All this is not to say that services for the CHT tribes do not exist. Some development measures have reached the region through the work of the United Nations Development Programme (UNDP), Amnesty International and local NGOs. The UNDP Bangladesh website reports that with the help of the Bangladeshi government and international partnerships, the safety and welfare of the CHT people have improved significantly. In 2011, the government formally recognised tribal and ethnic communities, thus setting the stage for policies to protect their rights and freedoms. Given that the CHT Accord was signed in 1997, this recognition fourteen years later is indicative of how deeply the nationalist sentiment is ingrained within the policy-making of human rights protection. However, the website goes on to state that the CHT Accord will be fully implemented by 2020 as part of the nation’s seventh ‘Five Year Plan’. Major development projects that have been implemented through the Bangladeshi government and its partnerships include better infrastructure, better training of local police, an increased number of schools teaching in local languages and improved healthcare services, among others.

All this progress means nothing, however, if the voices on the ground are not heard. Without legal representation, the indigenous communities face deprivation in terms of basic citizenship rights. Without citizenship rights, the political parties feel no obligation to cater to their needs in order to secure their votes. As long as their representatives are chosen by the administration in power, their needs and struggles will not become common knowledge within mainstream channels and they will continue to retain their identity as ‘the other’ rather than as part of a culturally diverse, secular Bangladesh.

It is easy for the rights of minorities to be pushed onto the back burner, given the fundamental flaws in the judicial, political, economic and social systems in Bangladesh that plague its majority millions. Nonetheless, it is important to continue to draw attention to the plight of the indigenous tribes, so that any sustainable solutions that Bangladesh strives towards in the future will include these under-represented communities as well, and not just the majority.

Tanzia Amreen Haq is doing her MA in International Relations at Monash University, Melbourne, Australia. She obtained her BSc in Economics from the Independent University Bangladesh. She is currently researching sustainable development practices in Melbourne. Image Credit: CC by Flickr/Hasib Wahab.

Missed opportunities: time is running out for the Indian government to pass legislative gender quotas bill
Memorialising the ‘world’ in World War I