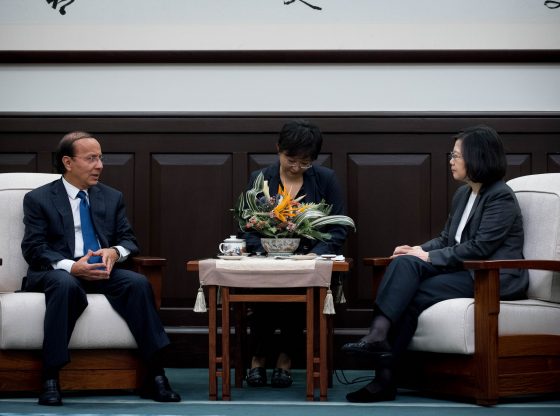 A curious incident occurred on 23 August 2018 amidst El Salvador’s announcement that it was breaking diplomatic ties with the Republic of China (ROC) (hereafter referred to as Taiwan) in favour of relations with the People’s Republic of China (PRC) (hereafter referred to as China). Commenting on the issue, White House Press Secretary Sarah Sanders stated that the decision ‘[…] will result in the re-evaluation of our relationship with El Salvador’. Sanders statement, while somewhat vague, included words like ‘implications’, and condemned China for its ‘interference’ in the Americas, letting the reader know in no uncertain terms that the US thought that El Salvador ought to be put on the diplomatic equivalent of the naughty step. She continued:

Countries seeking to establish or expand relations with China in order to attract state-directed investment that will stimulate short-term economic growth and infrastructure development may be disappointed over the long run. Around the world, governments are waking up to the fact that China’s economic inducements facilitate economic dependency and domination, not partnership.

Well, Mrs Sanders, pot-kettle-black! The hypocrisy of this statement would be more staggering if it was not for the litany of other staggering remarks made by the incumbent administration in Washington DC since it took office in early 2017. In essence, the White House statement essentially condemns a country in their near abroad for de-recognising a territory that the US itself has not recognised since the winter of 1978-79.

The issuance of such a statement therefore provides a useful opportunity to delve a little deeper into the complexities of the US–Taiwan–Latin America diplomatic triangle. Taiwan enjoys formal diplomatic relations with only 17 small countries around the world. Moreover, since the election of Tsai Ing-wen as President in 2016, Taiwan has once again begun to lose some of its remaining formal partners after São Tomé and Principe (2016), Panama (2017), El Salvador (2018) and the Dominican Republic (2018) switched their relations to China. Honduras, Haiti, Paraguay and the Holy See at the Vatican have also murmured about similar action.

What is more, it is no coincidence that eight of Taiwan’s remaining formal allies are located around the Caribbean basin in the US’s backyard – Guatemala, Belize, Honduras, Nicaragua, Haiti, Saint Kitts and Nevis, Saint Vincent and the Grenadines, and Saint Lucia. This is a region of the world where the US has dominated the foreign and domestic policies of notionally independent states. Moreover, when Caribbean basin governments have been deemed undesirable to US interests, Washington has pressurised, demonised, infiltrated, embargoed, supported violent local uprisings by pro-US groups and, on several occasions, engaged in direct military intervention in an attempt to bring about regime change, including in Cuba (1961), Grenada (1983), Panama (1989) and Haiti (1994) in the post-World War II era. To this end, the recent White House statement concerning El Salvador should be viewed in the context of a long history of US attempts to control the policy options of governments in its near abroad.

However, this situation is quite confusing given that the US does not itself recognise Taiwan, yet remains the island’s protector and most important ally, with the explanation for this owing as much to the current structures and protocols of diplomatic recognition as it does to US self-interest regarding the Asia-Pacific region. Undoubtedly, if the diplomatic system still worked under the declaratory approach of the Montevideo Convention of 1933, then Taiwan would continue to enjoy more widespread formal recognition. However, the birth of the UN in 1945, developments in globalisation since that time, and growth in the number of international state actors since decolonisation have resulted in a move to a more constitutive system where recognition is conferred upon a government by other national governments.

Working within this system, then, the US and its Central Intelligence Agency (CIA) in particular have, in cahoots with the Kuomintang in Taiwan, attempted to orchestrate diplomatic scenarios in which Taiwan would socially, economically and politically flourish domestically while simultaneously being withdrawn from the international community; formally, at least. Classified versions of this core strategy have been in place since at least the late 1960s, with snippets of it being revealed through the Wikileaks ‘Cablegate’ papers. One aspect of the strategy involves the US’s key allies in its near abroad being incentivised to retain links with Taiwan instead of China.

Therefore, beyond the immediate politics of the China–Taiwan confrontation, the decline in Taiwan’s formal recognition across Latin America and the Caribbean reflects changes to major international power dynamics. These include in particular a rising China, a United States empire in decline with waning authority over the affairs of others, and the subsequent domestic and foreign policy alterations by weaker states which are incentivised to behave according to their power status. Nevertheless, Sarah Sanders’s utterance that in recognising China these countries ‘may be disappointed over the long run’ makes the valid point that a new dawn of freedom does not await. Instead, it is more likely that we shall see the substitution of one power for another.