Memorialising the ‘world’ in World War I 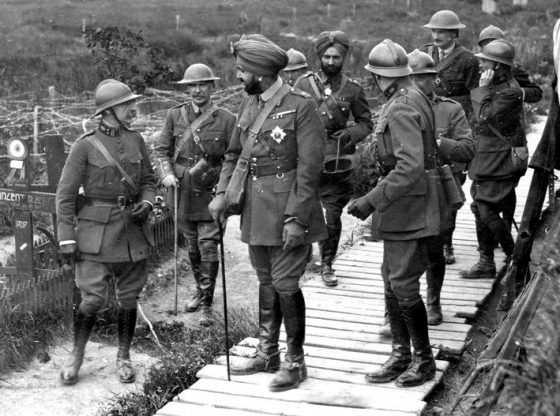 The war to end all wars, as it is still ironically referred to, remains a key part of global history. Classrooms around the world, my own included, continue to study the complex geopolitical struggle that created the powder keg set off by the assassination of an Austrian archduke in 1914. With commemorations for the centenary of the conflict taking place across the UK for the past four years and now coming to their end, its legacy has been reinvigorated, as if that was even necessary.

However, as a citizen of a nation that would not be emancipated until decades after the 11 November 1918 armistice was signed, an uneasy tension still lingers in the air for me, unresolved since my time as a school student. The terminology around the fighting is clear: World War I. A global war. And yet, where is the world in this world war? The very literal geography of the fronts aside, where are the bloodstained legacies of Empire, the broken promises of colonial Mandates, and the tributes to the fallen millions who fought not for their own freedom but for their colonial masters?

The practice of memorialisation is fraught with the dangers of nostalgic revisionism. Centring Europe as a geospatial site may be a logical thing to do – although, of course, this erases the dogged battles for the sea lanes in the West Pacific and the Indian Ocean – but it also has the toxic result of recreating the heavily racialised power dynamics which were present in the early twentieth century.

The sacrifices of the various colonial territories have gradually emerged as a point of discussion in the wider historiography of the conflict. The contribution of the British Raj (modern-day India, Bangladesh and Pakistan) has become a bone of contention within commemorations in the UK. On a practical level, it is impossible to ignore that over one million soldiers from the Raj fought in the war, and over 74,000 of them lost their lives. Yet the ways in which this is remembered shows how there is still much to be agreed upon.

This is doubly important in the climate of the ongoing Brexit negotiations. On the one hand, the UK is forging ahead with an ill-advised isolationist path, hoping to reclaim some sort of mythological lost golden age of self-determination and, implicitly, of whiteness. On the other hand, the modern British population is much more ethnically diverse, and links to organisations like the Commonwealth of Nations are being reaffirmed in the wake of the loss of EU support. In this complicated situation, recognising the role of Empire means walking a tightrope – ignoring it risks alienating large parts of the global community, but commemorating it cannot be done without at the very least acknowledging the exploitative and oppressive structures that were in place at the time (and which continue to play a role in much of society today).

Adding to this intricate and complex history is the fact that the anti-colonial struggle in the Raj became firmly embedded within the politics of the war, as was the case in other colonial outposts of all the European powers. With Indian soldiers participating in the fighting and raising the profile of their struggle at home internationally, anti-British organising became much more unified. At the 1916 Lucknow Session of the Indian National Congress, the party officially declared a resolution to demand self-autonomy and eventual self-governance for India. In a rare show of solidarity, the All-India Muslim League also supported the decision, especially since the British fighting against the Ottoman Empire – at the time the custodians of all major Islamic holy sites – undermined any claims by Britain to being religiously neutral within its administration.

The Lucknow Pact would see both parties pushing for self-determination, in exchange for the recognition of separate electorates in provincial legislatures for Muslims. This in turn led to the setting up of the Khilafat Movement, an increase in British sectarian divide and rule policies following Versailles, and the eventual Partition of the Subcontinent in 1947. However, barely any of these dynamics seemed to register during commemorations of the 70th anniversary of Partition last year. Apparently, the commemoration of that traumatic event and the ongoing centenary events of World War I are to be viewed in isolation; never mind them happening simultaneously.

In addition to the colonial outposts of the European imperial powers, various non-European independent states also took part in the ‘great’ war. The Allies included the United States of America, the Empire of Japan, the Republic of China, Brazil, a coalition of the Central American states, the Kingdom of Siam, and the Republic of Liberia. Barring the first three, the others are hardly ever mentioned in mainstream history. Similarly, the Central Powers included the South African Republic, the Sultanate of Darfur, Azerbaijan, Jabal Shammar (part of modern-day Saudi Arabia), the Dervish Movement (a rebel movement based in Somalia), and Ethiopian support for the Ottoman Empire. Again, barely any of these combatants register in any official commemorations.

The erasure of these independent states betrays an even greater sense of racialisation in how we choose to remember the war. While a sense of traditionalism in memorialising conflict can be used to justify ignoring the anti-colonial struggle – despite the unjust nature of such a decision – it cannot be an excuse for forgetting states that took part in the fighting, not as vassals, but as equals. The now century-long historicisation of World War I represents a wider question about the ways in which global power structures continue to function.

At the end of the day, remembering World War I as a key postcolonial moment is a fallacy. As the memorialisation of the conflict shows, the world is not postcolonial. While ownership of territories may have ended, the ownership of memory is still predicated on colonial dynamics.

Ibtisam Ahmed is a final-year Doctoral Research Student at the School of Politics and IR at the University of Nottingham. A member of the Asia Research Centre, his thesis aims to be a decolonial killjoy which deconstructs the utopia of the British Raj and refocuses the narrative on anti-colonial and indigenous utopias instead. Image Credit: CC by Wikimedia Commons/Old Indian Photos.

The indigenous tribes of Bangladesh: small voices lost in the sea of frustration
Exploring the US–Taiwan–Latin America diplomatic triangle