Jair Bolsonaro and the future of Sino-Brazilian Relations 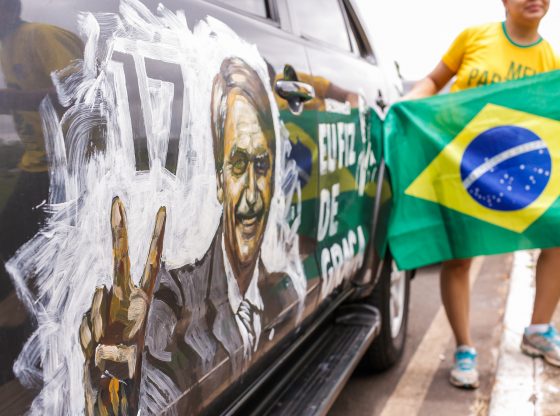 Sino-Brazilian relations have intensified in the last decade and have entered a new phase – in the face of a commercial war between China and the United States – which is boosting Brazilian soya exports. Trade between China and Brazil stood at US$75 billion last year. Since 2009, the Asian country has been the main trading partner of Latin America’s largest economy, but it remains unfamiliar to most Brazilians and their rulers. The far-right Brazilian president-elect, Jair Bolsonaro, a former army captain turned congressman, has been known in past years for praising dictatorship and torture and for racist and misogynist speech. He has also cultivated an anti-China rhetoric. His victory, unthinkable a year ago, will have a direct impact on Sino-Brazilian relations. The outlook of the Brazilian extreme right nurtures a caricatured threat of communism in Brazil. Their anti-communist paranoia is fed by ‘fake news’ and disinformation spread in the Brazilian deep web and social media. One week before the election, Bolsonaro of the conservative Social Liberal Party labelled his political rivals ‘red’ and threatened a purge of left-wing ‘outlaws’.

China now plays a decisive role in the health of the Brazilian economy. Chinese investment in Brazil in 2017 reached its highest point in the last seven years. From January to September 2018, Brazilian exports to China totalled about US$47 billion, more than double the level of sales to the United States. Bolsonaro stated that ‘China is buying Brazil’, and portrayed the country as a danger to Brazilian sovereignty.

The fast-growing participation of China in the Brazilian economy and in other Latin American countries has contributed to an increase in fears of Chinese economic and political influence, amplified by a lack of public awareness of the transformations brought about by Chinese reforms and the opening process over the past 40 years. The polarised political environment in Brazil recapitulates the narratives that dominated the last century’s geopolitics but which do not reflect the current international landscape or the ‘New Era’ of socialism with Chinese characteristics, which has set the tone for policy-making in the country and given Chinese foreign policy a more pragmatic orientation.

Bolsonaro wants to direct the Chinese away from strategic sectors like energy and oil and access to other natural resources. However, despite the positions he has taken in the past decades, he has received the strong support of agribusiness, for which China is a major client and which will play an undeniable role in decision-making in the new administration. Paulo Guedes, an economic ultra-liberal and likely future Economy Minister, has promised infrastructure concessions and privatisation in order to attract foreign investment. Without mentioning any specific government or concrete threat, Bolsonaro’s short and vague government plan speaks of ‘no longer praising murderous dictatorships’ and affirms that it will not give away Brazilian assets ‘to international dictators’.

The document promises to ‘reorient the partnership axis’ of the country’s foreign relations towards a rapprochement with Washington. China, the largest market for Brazilian products, is not mentioned. Instead, Taiwan is referred to four times. Following Donald Trump’s steps to emphasise connections with the island as part of a strategy to reshape relations with China, Bolsonaro’s decision to switch the previously announced stop in Hong Kong to one in Taiwan during his Asia tour created friction with Beijing, which considers Taiwan a rebel province. At the beginning of the year, Bolsonaro became the first Brazilian presidential candidate to visit Taiwan since Sino- Brazilian relations were established in the 1970s.

Far more extreme than Trump, the future Brazilian president has attacked democratic institutions and threatened minorities and political opponents. His lack of international experience and aggressive speech could discomfort the Chinese leadership, who may have little difficulty with authoritarianism but dislike inconsistency and unexpected changes. In recent weeks, Chinese diplomats in Brazil have had two meetings with the Bolsonaro campaign team in order to test the temperature of those changes. But the next government will of necessity have to deal with Beijing.

In 2019, Brazil will hold the rotating presidency of BRICS (the five major emerging economies of Brazil, Russia, India, China and South Africa), and Bolsonaro is expected to host the 11th Summit of the group. He is likely to use anti-China rhetoric to justify an alignment with America’s foreign policy agenda. The stability and particular level of independence currently enjoyed by Itamaraty (the popular name of Brazil’s Ministry of Foreign Affairs), could also be challenged by the future president. Bolsonaro’s advisors have accused diplomats of being behind the wave of negative media coverage and have promised a ‘witch hunt’ once in power.

Foreign policy did not receive a great deal of attention in the recent election, and a clear plan has yet to be presented by the future president. The economic interests of the groups who helped to elect Bolsonaro have the potential to guide international cooperation in the short term. The new government will certainly face difficulties in developing a more sophisticated and less dependent cooperation with China. Brazil has a surplus trade relationship with China, but the Chinese demand for Brazilian meat and grain is having a deleterious effect on the environment, putting the biome of the Cerrado and the Amazon rainforest at risk.

The export agenda is little diversified and relies mainly on commodities such as soybean, meat and minerals. Without a clear cooperation strategy, Brazil is losing opportunities. Brazilian products, brands and culture have failed to occupy a space in the dynamic Chinese market, and vital investments in science, technology and sustainable development are being neglected.

Luiza Duarte is a researcher and journalist based in Hong Kong. Currently, she is an international correspondent for the main Brazilian pay-TV all-news channel. Additionally, Duarte is a regular contributor to Radio France Internationale (RFI) and BBC World Service (BBC News Brazil). She received her PhD in Political Sciences from Sorbonne Nouvelle University – Institute of Latin American Studies (IHEAL). Image Credit: CC by Alessandro Dias/Flickr.