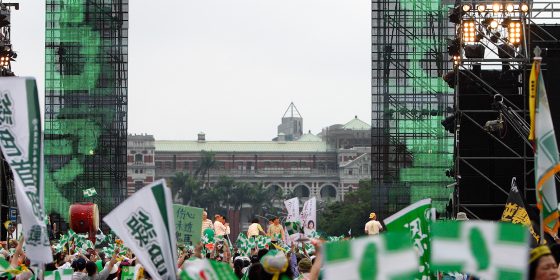 In less than a week, millions of Taiwanese voters will go to the polls to vote in one of the most complicated elections in Taiwan’s electoral history. Dubbed as the “9-in-1” local elections, voters will select candidates in 9 different races, including mayors of 6 special municipalities, 16 county/city commissioners, council members, as well as heads and representatives of boroughs. In addition to deciding the fate of candidates running for more than 11,000 positions, Taiwanese citizens will also vote on 9 separate referenda on issues ranging from same-sex marriage and nuclear energy to Taiwan’s participation in international sporting events. Depending on where they live, some voters may receive as many as 14 ballots.

While volume alone will place the elections in the record book, the results will have significant implications beyond 2018. Indeed, the “9-in-1” elections have been seen as a prelude to Taiwan’s 2020 presidential election.

Observers have characterized the 2018 races as “mid-term elections” for Taiwan, essentially a referendum for incumbent President Tsai Ing-wen and her pro-independence Democratic Progressive Party (DPP). Tsai won a landslide victory to become Taiwan’s first female president in 2016, after voters expressed concerns over the China-friendly policies implemented by then-President Ma Ying-jeou of the Kuomintang (KMT). This anti-China sentiment also led to the DPP’s gaining the majority of seats in Taiwan’s parliament in the same year. With control of both executive and legislative branches, Tsai addressed a number of hot button issues since taking office, including labor reform, long-term care services and pension reform. These policies, however, have not been appreciated by the general public. In the two-year period since inauguration in May of 2016, Tsai’s job approval rating has declined significantly from 76.4% to 29.2%, while her disapproval rating jumped from 23.6%% to 71.8%. Tsai’s poor showing has cast a long shadow on the electoral fate of DPP candidates.

Close races have developed in such cities as New Taipei and Taichung but the most surprising of all comes from Kaohsiung, the southern port city with Taiwan’s third largest population. The DPP has been in control of city hall for 20 years, and few would expect the DPP stronghold to be at risk in the November election. While the Pan-Blue Alliance headed by the KMT has largely dominated the political landscape of northern Taiwan since 2000, the Pan-Green Alliance led by the DPP has dictated southern Taiwan. The recent surge of KMT candidate, Han Kuo-yu, in the Kaohsiung mayoral race has thus been a surprise to many. Han is a mainlander descendant and a military veteran, characterizing him as a classical Pan-Blue politician. His campaigning in Kaohsiung is like Democratic Senator Heidi Heitkamp’s running in a deeply-Republican North Dakota in the U.S. In contrast to his DPP opponent, Han’s charisma, populist tone, and “it’s the economy,” message have made the election a competitive race. For the KMT, winning Kaohsiung would break the myth of the regional divide between a “Blue North” and a “Green South” and have significant implications for the 2020 presidential election.

Another important race that has gained attention is the mayoral election of Taipei City, the country’s capital in northern Taiwan. While there are five candidates in the race, only three are considered viable: one candidate each from the KMT and the DPP, and the incumbent Mayor Ko Wen-je who is seeking a second term. Ko, a medical doctor-turned-politician, is a straight talker with a political stance close to the Pan-Green Alliance and a likely contender in the 2020 presidential election. Running as an independent in 2014, he won a landslide victory with strong DPP support. However, Ko saw his DPP backing increasingly decline in recent years after his endorsement of China and Taiwan being “one family” (liang-an-yi-jia-qin). While Ko’s overture has been welcomed by Chinese leaders and allowed him to engage in various cross-Strait exchanges since taking office, it angered supporters of Taiwan independence and led to the DPP’s decision to nominate its own candidate in the 2018 election. Pundits and observers generally believe Ko is likely to be successful in his re-election bid, but the candidate nominated by the DPP will unavoidably take some electoral support from him and provide the KMT candidate with benefits of a divided Pan-Green electorate in a three-way race. For the KMT, winning the mayoral seat of the capital city would be a significant morale boost and contribute to the party’s momentum leading up to the 2020 presidential election. However, should Ko score a victory without the backing of the DPP, he would be a strong contender for the presidency.

The DPP currently controls 13 of the 22 special municipalities, counties and cities. Major DPP losses in the elections, particularly if the KMT wins both Taipei’s and Kaohsiung’s mayoral elections, could threaten President Tsai’s leadership in the party and her chance for a second term. While local elections are waged largely over local causes, the electoral results of Taiwan’s upcoming election will have significant implications far beyond 2018.

T.Y. Wang is Professor of Political Science at the Department of Politics and Government, Illinois State University. His research focuses on Taiwanese national identity, cross-Strait relations and US policy towards China and Taiwan. Image credit: CC by MiNe/Flickr.

‘Much ado about nothing’: the media view of North Korea
North Korea’s Chinese-style ‘Reform and Opening Up’