The New Battle for the Third Place in 2018: A Breakthrough but also a Missed Opportunity

Home /Asia/East Asia/Taiwan/The New Battle for the Third Place in 2018: A Breakthrough but also a Missed Opportunity 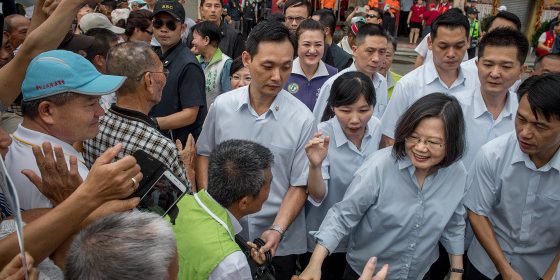 Four years ago on the eve of the last round of local elections in Taiwan I wrote a piece looking at the prospects of smaller parties. Today I would like to reflect on what has changed and how we can best understand the challenger parties in 2018. Potentially small parties can play an important role in democracies. They often advocate policies and represent minorities that are neglected by mainstream parties and can bring diversity into political life.

Taiwan’s smaller parties had seemed to be in terminal decline from 2004 through to 2010. There was a small recovery as the People First Party (PFP) and Taiwan Solidarity Union (TSU) returned to parliament in 2012. However, a more important development appeared to be the Sunflower occupation of parliament in the spring of 2014. One of the causes of the wave of social protest during the Ma Ying-jeou era had been dissatisfaction with mainstream party politics and thus calls for a third force became much louder in society. I recall being on a panel with Sunflower leader Huang Kuo-chang (黃國昌) in the summer of 2014 in London in which at one point large sections of the audience shouted out “Form a Party.”

The November 2014 elections were held just over six months after the end of the Sunflower occupation so it looked like a historic opportunity to bring alternative voices into Taiwan’s local politics. In that election there were two types of small parties. The first were the splinter parties such as the PFP, New Party (NP) and TSU whose politicians had largely defected from the mainstream parties and tended to have a similar policy outlook to their parent parties. The second were alternative parties such as the Green Party Taiwan (GPT) and Tree Party (TP) that stressed a largely different set of issues and polices from the mainstream parties. In the past the splinter parties had been far more successful at both the local and the national level. What made 2014 noteworthy was that for the first time alternative parties were running well funded and organized campaigns, particularly the GPT. When the results were released, there was a mixed picture for both types of small parties. The TSU and PFP both doubled their council seats up to 9. However, at its peak in 2002 the PFP had nominated 197 with 65 elected; making it look like it could soon rival the KMT as the second largest party. As for the alternative parties, the GPT won two councils seats, the TP one seat and the Labor Party retained its sole seat. Although these were historic results, overall it was the DPP that benefitted the most from the Sunflower wave in these local elections. There was some disappointment that the alternative parties had not performed better.

Four years later the picture looks quite different for the two main types of small parties. The splinter parties appear to have reverted to their long-term pattern of decline. Among the four main splinters only the PFP managed to win parliamentary seats in 2016. This year the PFP, NP and TSU all saw large declines in their numbers of nominated candidates.

In contrast the environment looked much more promising for the alternative parties. In 2016 the NPP became the first alternative party to win national parliamentary seats, becoming the third largest party. For much of the 2016 campaign, it also looked as if the GPT/SDP Alliance would also get enough votes to enter parliament. Since the DPP government came to power it has disappointed many of its former younger and civil society linked supporters on issues such as its handling of labour policies, indigenous land justice and LGBTQ rights. In fact, both the mainstream parties are unpopular and distrusted. Moreover, the issue of environment caused by the referendums should also have favoured the alternative parties, as they had consistently opposed nuclear power and promoted LGBTQ rights. In the past the DPP has at times attempted to steal civil society linked issues, but this time the DPP took a passive stance. According to Bonnie Meguid the ideal scenario for small party growth, is where mainstream parties take an adversarial stance on the small parties’ core issues, as this should allow increased issue salience and small party issue ownership, allowing it to reap electoral benefits. With many KMT politicians backing the conservative referendums and the DPP largely silent, the alternative parties should have been able to capitalise.

Although the focus of the media has been on the KMT’s sweeping victories in the local executive elections in 2018, Brian Hioe’s essay notes how ‘the most unremarked upon event was the surprise triumph of the New Power Party (NPP) in securing sixteen city council seats‘. The NPP has reinforced its position as the third largest party at both the national and local level. In addition, the GPT won three seats, the Labour Party two and the SDP one seat. In contrast, the splinter parties were unable to take advantage of the unpopularity of their parent parties, with the TSU reduced to five seats, the PFP to eight, the MKT won three, and the NP retained its two seats. The key feature of the majority of successful splinter party candidates was that they were incumbents not reliant on party appeals. The collapse of the MKT reveals the limited space for traditional style small parties, as at one point in 2015 it claimed to have over 100,000 members and to be on the verge of becoming the second largest party in terms of membership. The results of 2018 mean that for the first time there are more alternative party councillors than splinter party councillors.

Nevertheless, there is still some disappointment that the numbers of alternative third force councillors could and should have been higher. I still recall how I was told in the aftermath of the 2016 elections that the NPP could replace the KMT as the second largest party. A number of high profile NPP candidates failed to get elected, such as Wu Zheng (吳崢) and Tseng Po-yu (曾柏瑜). Only one of the SDP’s five candidates was elected. The GPT was only able to add a single seat despite its strong grassroots organizations in Hsinchu and Taoyuan. The Radical Party had run a strong campaign as independents in 2014 looked to be building momentum especially in Kaohsiung, with the potential to win disillusioned DPP supporters. However, none of its candidates were elected. The same was true of the Obasan Alliance. This grouping (officially standing as independents) offered a unique appeal, with all its candidates middle aged women projecting progressive stances on environmental and LGBTQ issues. Despite their lack of experience and funds they did have a number of competitive candidates and received the support of some former GPT activists. However, like the Radical Party, none of the Obasan Alliance was successfully elected.

To explain the limitations of the alternative party breakthrough, we need to consider a number of long-term challenges as well as some that are unique to 2018. In the past, one of the biggest disadvantages that alternative parties faced was resources. Not only does Taiwan have one of the highest requirements for candidate deposits but also campaign spending tends to be very high. Mainstream party politicians are much better funded. Moreover, outside the main metropolitan areas some mainstream party candidates still rely on vote buying. In Penghu I was told on a number of occasions that Tree Party and civil society linked candidates had no chance in councillor elections without buying votes. A further challenge has long been human resources. For instance, in GPT interviews I have often been told how hard it is to find suitable candidates. Moreover, unlike the splinter parties, alternative parties generally do not recruit defectors from mainstream parties. This also means that the vast majority of alternative party candidates do not have prior election experience, as the common pattern has been that after losing once they will drop out of electoral politics. Recently, alternative parties have made huge strides on fund raising to run campaigns but also as they become more competitive their supply of candidates willing to stand has increased. Nevertheless, Taiwan’s SNTV local election system has tended to encourage candidate oriented voting behaviour and this does remain a challenge for small parties’ issue based campaigns. The case of the SDP reminds us that star candidates do matter, as among their five candidates, it was only their best known candidate Miao Bo-ya (苗博雅) that won.

A further challenge is the connection between voters and alternative party politicians. Mainstream parties rely on long-term party identification as well as entrenched local support networks to mobilize their supporters. In contrast, smaller parties are much more reliant on floating voters and their local organizations and networks remain in their infancy. Here again I can see significant progress. For instance NPP and GPT politicians have attempted to build up grassroots organizations in certain locations. However, such organization requires time and resources to develop.

In 2018 one of the biggest problems facing the alternative parties was disunity and lack of coordination. While in 2016, competition was between the NPP and GPT/SDP Alliance, in 2018 there was a proliferation of alternative parties competing for the same set of potential voters. This meant that the alternative vote was often diluted, allowing the mainstream parties to reap the benefits. The case of Taipei City District One illustrates the problem. This is a 13 magnitude district but the following alternative parties were competing against each other: NPP, SDP, People’s Democratic Front, Radical Party, Obasan Alliance, as well as a social movement activist standing as an independent. In this case only the NPP candidate was elected, when a coordinated campaign could have allowed at least two to get elected. In places it even looked as if the NPP was attempting to undermine rival alternative party candidates in locations where they were building up organizations such as the GPT in Taoyuan, the SDP in Taipei and the Radical Party in Kaohsiung.

What are the prospects for small parties in 2020? Making predictions is a risky business. At this point in time four years ago the NPP had not even been formed but only a year after its formation it would go on to become the third largest party in parliament. The NPP naturally will take the most momentum into the campaign on the back of its 2018’s local success. However, it will also face the challenge of whether to go it alone or recreate its alliance model with the DPP from 2016. As for the other alternative parties, if they want to be relevant in 2020 they will need to create some kind of broad alliance. The GPT/SDP Alliance model of 2016 is unlikely to be enough to get over the required five percent threshold; something more inclusive would be needed. One of the biggest obstacles to alternative parties working together is not policy differences but clashes of personalities. I regard the NPP as a hybrid party with both traditional and alternative party characteristics. Thus Taiwan lacks a genuine alternative party at the national level. To create such an alliance will require leaders of the existing alterative parties to set aside accumulated grudges.

Dafydd Fell is Reader in Comparative Politics at the Department of Politics and International Studies of the School of Oriental and African Studies (SOAS), University of London. Image credit: CC by Office of the President, Republic of China (Taiwan)/Flickr.

Why Democracy Is the Best Form of Government for Taiwan
Informing the public: On China’s International Import Expo #CIIE, the British press fails again