Between the Devil and the IPCC: Cultural constraints to achieving 1.5°C warming 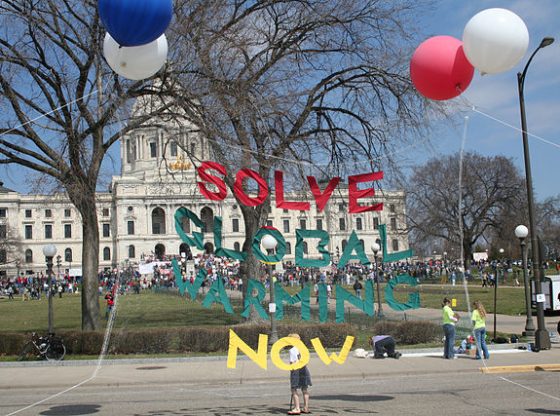 As previous incarnations have arguably failed to do, the IPCC’s Special Report on 1.5°C warming resounded like the tolling of a funeral bell. Twelve years it intoned, with a biblical sense of numeracy; twelve years to save the world around us, forsake avarice and slake our addiction to what kills us.

Energy companies are too powerful, too entrenched in the fundamentals of our economy to be allowed to take the hit.

In its format and arrangement, the report is much as its forbears were: a collection of pathways leading to death and destruction, some more definitively so, some less. None of them good. But what has changed is the timing. Although still far too close for comfort, mid-century predictions belong to a distant time, a generation apart. This new and heavily contracted timeframe has an altogether different character. No longer a problem rendered in the indefinite future – ‘will I be around or won’t I?’ – this is a timespan that counts for so little in a life. Children, parents and friends will all be there too to see the point of no return.

Compounding this foreboding, the warnings offered by the most recent IPCC report could barely be starker. The difference between 1.5°C and 2°C would spell death for half or more of the populations of many species: 18 per cent of insects, 16 per cent of plants and 8 per cent of vertebrates face semi-destruction at that marginal difference of temperature. The human world, similarly, faces a wave of injustice, as the cost of both change and adaptation fall ‘disproportionately on the poor and vulnerable’. Poverty, disadvantage and death are the price of a failure to curb that half-degree, as 420 million more people will face extreme heatwaves and a further 65 million will suffer exceptional heatwaves as a result.

Yet through it all, resignation persists, fuelled by the sense that however seriously the threat of climate change is taken by individuals, the institutions and structures that govern action to curb it are too unwieldy to swing into action. Energy companies are too powerful, too entrenched in the fundamentals of our economy to be allowed to take the hit. Never mind that Shell, Exxon Mobil, BP and 87 of their corporate peers are responsible for two thirds of the world’s carbon emissions; they are too big to fail and too old to change.

Worst of all, it is the good news that bears this out. A recent report by the Energy Transitions Commission – a coalition of business, finance and civil society leaders from energy producers and users – was trumpeted by the BBC as the source of ‘new optimism’ for its prediction that industrial emissions could be eradicated by mid-century ‘at a cost of less than 1 per cent of global GDP’.

Mid-century. One per cent of GDP. Following the most apocalyptic – and temporally specific – of pronouncements only a few weeks earlier, it is easy to image the IPCC panellists weeping at the tin ears of industry. What has a percentage point or two of GDP to do with anything when hundreds of millions will suffer from a solution which is two decades late in coming? And that is before we even glance beyond the human dimension of a barrelling ecocide that has seen 60 per cent of the world’s species extinguished in less than half a century, and threatens worse still to come.

Yet the IPCC panellists have in some respects sown the seeds of their own failure. Wide-ranging change across all sectors is called for, but as long as the specifics are not addressed, an undergirding economic logic pervades the wider appeal for change. The panel calls for ‘innovative price and non-price national and international policy instruments’ to ‘shift market preferences away from fossil fuel-based technology’. This framing is akin to surrender. Not only are environmental outcomes notoriously difficult to predict – despite the IPCC’s best efforts – but as things stand, the incentives for key agents are not strong enough. Those sufficiently incentivised have the least influence in the market.

Moreover, whilst carbon-trading solutions have long been touted as a solution in principle, they appear increasingly ineffectual in practice. Recent research has questioned with growing frequency the effectiveness of even the steepest carbon tariffs – often cited at around US$100 per ton of CO2 – noting in particular the limited impact of such an approach on industry. Moreover, the evidence speaks for itself. Despite more and more countries imposing taxes on carbon, the impact on emissions has been negligible, to the extent that CO2 emissions even began to rise once more last year.

Resolving this is not a question of technical adjustment. Rather, the underlying architecture of mainstream economic modelling – the essentials of which belong to an age in which presuppositions of continued economic and material growth were a given – are fundamentally incapable of responding to ecological signals. Simply relabelling trees, rivers and the air that surrounds them as ‘natural capital’ or ‘ecological infrastructure’ won’t change this. Growth, after all, can occur perfectly well in the absence of local resources. Just ask Singapore.

What is necessary, then, is a shift not in valuation, but of values themselves. Responding to climate change effectively requires nothing less than a complete about-face from a growth-first ideology, in favour of a viewpoint from which weighing the ruination of a world against a few points of GDP is recognised for the moral aberration that it is. Above all, it is plain that rapid economic transformation of the kind advocated here cannot be achieved through market mechanisms alone, so the idea that countries working together for anything other than naked self-interest is ‘utopian’ must be abandoned.

Indeed, there is a long history of successful action in this respect. Within a quarter-century of the United States’ Clean Air Act in 1970, which began the phasing out of lead-based petrols, the percentage of children with elevated lead in their blood dropped from 88 per cent to 4 per cent. In the UK, a 5p tax on plastic bags saw usage drop by 85 per cent within a year. And then there’s the mother of them all: the 1987 Montreal Protocol that saw the ozone layer fixed, 1.5 million cases of skin cancer avoided, 330,000 cancer deaths prevented and 129 million cases of cataracts averted.

But the call to this kind of action has not yet come. The world’s energy needs could be affordably met by 2030 through renewable energy but the barriers to the plan are primarily social and political rather than technological or economic. Even though just six countries – China, the US, India, Russia, Japan and Germany – are responsible for 60 per cent of the world’s emissions, seeking those six signatures for a substantial programme of change has yet to be proposed.

Instead, whilst stating the case for immediate action, the IPCC has offered the tools for a slower solution than that required. Even in the face of apocalyptic scenarios, change is demanded only within the straitjacket of economic primacy; the cost to growth is prioritised over the cost to ecology and human welfare.

There is a mismatch, in other words, between the IPCC’s apocalyptic predictions and conventional solutions. It is a warning designed by committee and thus, in many respects, a fudge. Nevertheless, beneath the orthodoxy of its language, the report alludes to something it cannot say. Somebody must bear the cost of this breakneck, eleventh-hour adaptation. If this is not the energy industry itself, then it will be millions of individuals who are far less well-equipped to adapt to straitened circumstances.

The reality is that energy companies will never choose to make the difficult, expensive and – in the short term, certainly – unprofitable choices necessary to achieve a 1.5°C rise above pre-industrial levels instead of 2°C. Rather, this is a path that must be pressed upon them. Doing so is a political choice, but it is both feasible and necessary. As the twelve-year tolling grows louder, ideology must make way for ecology; the Devil must step aside before the deep blue sea.

Laurie Parsons is British Academy Postdoctoral Research Fellow at Royal Holloway and Co-investigator of Project Blood Bricks. A researcher of Cambodian livelihoods since 2008, Laurie Parsons’s work investigates the impact of mass labour migration and climate change on socio-economic inequalities. It combines a variety of approaches – including visual and statistical analysis of social networks, and qualitative methods – to discern how norms and social structures both reflect and mediate these new conditions. He has conducted large-scale projects examining Cambodia’s uneven economic development for Transparency International, Plan International, Save the Children, CARE International, ActionAid, the IDRC and the Royal University of Phnom Penh, among others. Image Credit: CC Wikimedia Commons.