Home /Climate Change, Environment, India, South Asia, Water crisis/Infrastructure and the struggle to adapt to climate change in the Himalayas 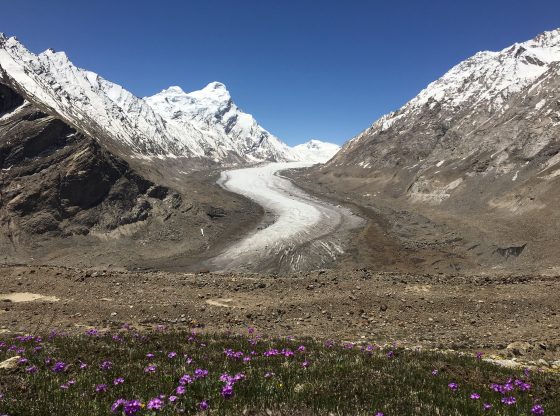 In recent years, scholars have produced a number of critical studies on how communities adapt to climate change. Based on interventions developed and deployed by institutions such as the United Nations, the World Bank, or large non-governmental organisations (NGOs), many have adeptly argued that climate change adaptation is too often a technocratic top-down process. But what does adapting to climate change look like when viewed from the bottom? In particular, how do marginalised communities cope with the impacts of climate change?

Is it only as technical experts that the inhabitants of Zanskar will become visible to the state and have their plight acknowledged?

Focusing on the plight of villagers from the region of Zanskar in the Indian Himalayas helps shed some light on this question. When I met Tsering Motup, this 78-year-old man had returned from the distant city of Kargil, where he had gone to petition the state to fix a canal that was to bring water to a parched plain located on the outskirts of the village of Abran.

Zanskar is located in the eastern part of the state of Jammu and Kashmir in India. This Himalayan region is often referred to by locals as an abandoned place. For half the year, Zanskar is cut off from the rest of India because snow accumulation closes the only road connecting the region to the rest of India. Even when this road is open, travelling in and out of Zanskar remains a daunting enterprise, due not only to the distances involved, but also because of poor road conditions. Zanskar is in Kargil District, and the 230-kilometre trip from Abran to Kargil can take anywhere from 8 to 12 hours, depending on road conditions. Geographical marginalisation is not the only challenge faced by Zanskarpas, as the inhabitants of the region are known. Arvind C. Pandey and his colleagues have evaluated the fluctuations of 26 glaciers in Zanskar and observed a continuous decline of more than 20 metres per year since 1989. These data are corroborated by research conducted by Ulrich Kamp and his colleagues. They studied several Zanskar glaciers and found that their area had shrunk by 18 per cent and they had retreated an average of 6 to 36 metres between 1962 and 2001. These findings align with the local population’s observations.

In addition to noticing the recession of glaciers, Zanskarpas have also noticed a significant decrease in snowfall over the years, and the disappearance of water sources over the past three decades. These changes are having a serious impact on farming activities, since the region’s agriculture relies almost entirely on water from snowfall and glacial melt. Zanskar receives next to no rainfall, and as the rivers are significantly lower than the fields, developing irrigation canals is a complex technical affair that generally requires canals that are several kilometres in length.

It is to address this global phenomenon that Tsering Motup travelled all the way to Kargil. A few years earlier, after appealing to the state for several years, he finally witnessed the completion of a canal that allowed him and the other villagers to convert a dry plateau on the outskirts of Abran into agricultural land. Although the canal was functional for a few months, its construction was problematic. At some point, the canal’s infrastructure was damaged by a small landslide, and ever since, Tsering Motup has been petitioning the state to have the canal fixed. According to the old man, if snowfall was as abundant as it was in the past, the villagers of Abran could invest in the effort of ploughing this land. But at present, all efforts are in vain.

In the context of water scarcity such as the one experienced by Zanskarpas, infrastructure projects like water canals are a means to adapt to climate change. A recent report by the Asian Development Bank highlights the need for an investment of US$26 trillion in infrastructure projects for countries in Asia in order to address a number of social, economic and environmental issues, among them climate change. Climate change is never experienced in isolation, and its manifestation exacerbates forms of stress already experienced by a community. For Zanskarpas, it takes place amid a general state of abandonment. In fact, this is the sixth time that Tsering Motup has made the trip to Kargil to appeal to the state to fix the canal in Abran. ‘They [the officials] are ignoring us because they would like us to do the work for them’, suggests Tsering Motup.

Indeed, in the nearby village of Kumik, this is how villagers have addressed their water supply problem, as reported in detail in the excellent book Fire and Ice by environmental journalist Jonathan Mingle. For decades, the farmers of Kumik suffered from a lack of water. Led by a visionary community member, Tashi Stobdan, villagers attempted to secure water for Kumik through various improvised technologies. After years of hard work, they finally addressed their predicament by constructing a canal several kilometres in length to bring water from the Lungnak River to Marthang, a vast plateau a few kilometres below Kumik, to which many villagers have relocated.

Only recently has their plight been recognised by the state, and today the maintenance of the canal is carried out by the local Public Works Department. But the ‘do-it-yourself’ approach to canal building as a means to address the water scarcity brought on by climate change raises a question about citizenship and adaptation to climate change: is it only as technical experts that the inhabitants of Zanskar will become visible to the state and have their plight acknowledged?

As with the villages of Abran and Kumik, for years, villagers throughout Zanskar have been petitioning the state to build irrigation canals. With the exception of Kumik, no villages have seen the completion of any projects. ‘Here, if you rely entirely on the government, nothing will happen’, notes Norbu, a man from Pishu, where, for more than two decades, villagers have been petitioning the state for a water canal that will bring water from the Zanskar River to their community. Many believe that the only reason the people of Kumik eventually managed to receive a bit of support from the state was because they had a technical solution to address their problem, thanks to the efforts of Tashi Stobdan. In other words, being entrepreneurial and having technical expertise seems to be instrumental in being recognised by the state. But not all communities have a Tashi Stobdan. Image: Norbu pointing at his field in Pishu; photo by Karine Gagné

The construction of the canal for Pishu eventually started in 2008. From Pishu, it is possible to look out on the canal cutting through 15 kilometres of very difficult terrain. But its construction is proceeding at a snail’s pace. Norbu questions the state’s degree of commitment to this project: ‘Will it ever be completed?’ he asks disparagingly, guessing, ‘probably not for another five to ten years’. Even when sanctioned, a project needs constant investment on the part of the villagers: since its inception, the work on the canal has been sporadic, stopping for no apparent reason and resuming when the villagers appeal to the authorities.

In the meantime, the villagers of Pishu are facing another pressing issue. The previous winter brought so little snow that the road that connects Zanskar to the rest of India opened several weeks earlier than usual. That summer, Norbu was the only villager to plough his land. All other farmers had abandoned the idea. Norbu limited his work to a tiny piece of land, a small fraction of his estate, where he sowed barley, the grain that is a staple in the local diet and important to many religious rituals in this predominantly Buddhist community. ‘This field has barely received any water since it was sowed’, says Norbu, pointing at his field. ‘It is only growing by the will of the gods’.

As the residents of Zanskar begin to prepare for winter, many villagers are wondering where they will find the fodder they need to feed their animals. Many have appealed to the authorities for help, but their calls remain unanswered. It is this systematic neglect that prompted Kunzal, a man from Karsha, where for years people have been asking for a canal to bring water to their fields, to observe during a meeting with a group of desperate farmers: ‘We should have droughts like this for another few years. Maybe this is the only way the government will notice us and help us’.

Karine Gagné is Assistant Professor of Anthropology at the University of Guelph, Canada. She is the author of Caring for Glaciers: Land, Animals, and Humanity in the Himalayas. Image Credit: Karine Gagné.

India and the 1.5°C warning: The power of political targets
China and Japan – an unlikely climate partnership?