Trash politics: Grassroots objection and the incineration boom in China 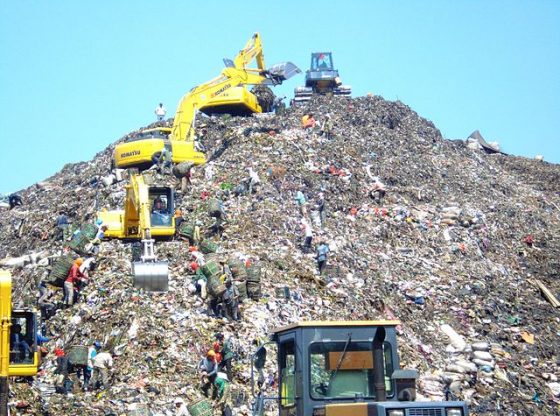 In recent years China has become one of the world’s largest producers of trash. With garbage piling up, the government has turned to the use of incineration, developing it into one of the main methods of waste management. However, incineration as a means of waste disposal is highly controversial due to its environmental and health hazards. An incinerator may create highly toxic and persistent pollutants, such as dioxins and heavy metals. As a result, the construction of an incineration plant in China often meets with objection from its neighbouring community.

Turning a blind eye to emission violations by incinerators would risk the health, if not the lives, of local residents.

Since China’s first known anti-incineration campaign emerged in Liulitun, Beijing, in 2006, at least fifty significant protests of this kind have taken place across the country. In many cases, when thousands of residents took to the streets forcefully opposing an incinerator, the local government often made immediate concessions by putting the project on hold. Some observers labelled the phenomenon ‘stop (project) after disturbances’ or a cycle of ‘start (project) — protest — stop (project)’. Others saw the victories of several protest cases as evidence of citizens’ ability to influence public policy in China.

Indeed, a number of protests were able to put pressure on local officials to make concessions – suspending or revoking the incineration project. This was the case both in Liulitun and in Panyu, Guangzhou (a cosmopolitan city close to Hong Kong); in both examples, it was the local middle-class dwellers that led the protest campaigns. The urban middle class are usually in a better position to wring more lenient treatment from the state than rural peasants, due to identity politics and the resources available to protesters (such as media access and social connections).

Nonetheless, government concessions have proven to be only temporary. First, cancelled projects can be relocated. The Liulitun project was moved to Sujiatuo, and the Panyu project to Dagang; compared to the originally selected communities, both substitute communities are remoter, poorer, and more sparsely populated, with less capacity and power for making their voices heard. Second, while some incineration projects might be postponed due to local opposition, they can still be resumed at the originally selected sites; since 2014, this trend has become more pronounced and a number of suspended projects have been resumed.

The victories of individual protests, therefore, by no means represent the whole picture of incineration politics in China. Despite rising resistance, the incineration industry has experienced a boom in the past decade or so. According to China Statistical Yearbooks, the number of incineration plants jumped from 69 in 2006 to 220 in 2015, and the two years between 2015 and 2017 alone saw a growth rate similar to that of all 17 years between 1988 – when China’s first incinerator came on stream – and 2005.

The industrial boom is closely linked to the Chinese government’s growing commitment to incineration. Its national development initiatives have actually set quantitative goals for an increase in incineration. China’s 12th Five-Year Plan (2011–2015) and the 13th Five-Year Plan (2016–2020) regarding garbage treatment stipulated that by 2015 and 2020, respectively, more than 35 per cent and 50 per cent of municipal solid waste should be incinerated; for the eastern region (China’s most developed region), the figures were 48 per cent and 60 per cent, respectively.

To achieve these goals, the central government has issued a series of specific policies to boost investment in incinerators, including state subsidies for waste disposal and favourable feed-in tariffs. The incineration-friendly policies are no surprise, considering that garbage politics has been heavily influenced by pro-incineration experts and the incineration industry; some pro-incineration experts have literally helped to draft the 12th Five-Year Plan. Against this backdrop, local governments have recently taken steps to resume previously delayed projects; some have staged high-profile political campaigns to gain compliance and push back against resistance. The first successful case took place in Hangzhou, a prosperous city adjacent to Shanghai. Today, the Hangzhou case has been hailed as a ‘model’, studied by other local governments seeking to restart their own stalled incineration projects.

Although anti-incineration protests fail to block or reverse pro-incineration policies and the incineration boom completely, the activism and corresponding media reports have helped to raise public awareness of the environmental hazards of incineration and to put pressure on the government to strengthen its oversight of incinerators. For instance, since 1 July 2014, the authorities have imposed a stricter emission limit for dioxins on incinerators: 0.1 ng TEQ/m3 (the same as the EU standard), which represents progress compared to the old standard of 1.0 ng TEQ/m3.

In April 2017, to improve information disclosure by incineration facilities, the then Ministry of Environmental Protection required that each plant install an automatic monitoring system, erect an electronic screen for the public display of emission data, and connect the plant’s automatic monitoring system to the network of environmental protection agencies. Since 2016, the government has also devoted more attention to promoting waste sorting and recycling in order to reduce trash production, a cause that anti-incineration activists have been advocating for years.

It is still too early to say how effectively these regulations and guidelines are being implemented in practice. Yet one thing is certain: turning a blind eye to emission violations by incinerators would risk the health, if not the lives, of local residents. After all, there is no lack of reports on a surge of cancer sufferers in communities hosting incinerators in different parts of China. A few weeks ago, even a prominent pro-incineration expert finally admitted that an incinerator posed high health risks to nearby residents, echoing academic research findings. As hundreds of incinerators are already in operation in China, growing evidence of their environmental impact will inevitably come to light.

Yao Li is a postdoctoral fellow at Harvard University’s Ash Center for Democratic Governance and Innovation. She is the author of Playing by the Informal Rules – Why the Chinese Regime Remains Stable despite Rising Protests (forthcoming, Cambridge; Cambridge Series in Contentious Politics). Her articles have appeared in journals including Government and Opposition, the Journal of Current Chinese Affairs, and The China Journal. Image Credit: CC Wikimedia Commons.

China and Japan – an unlikely climate partnership?
The long read: From the Anthropocene to the Urbanocene: Understanding Asia’s rural out-migration and global climate change